Kevin Grieve
|
Posted: Feb 22, 2021 12:01 AM
Share   Tweet
The opinions expressed by columnists are their own and do not necessarily represent the views of Townhall.com. 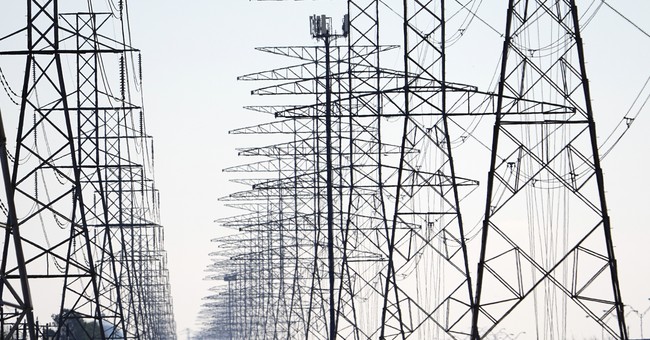 Four million homes went without power in Texas. Will the self-inflicted power grid blackouts in Texas finally throw cold water on the fantasy of alternative and intermittent renewable energy as a replacement to the miracle of hydrocarbon fuels? It should.

Cold weather completely shut down wind turbines which supply over 20 percent of Texan’s energy needs and partially shut-down natural-gas and coal-powered plants which were running at about half capacity just when energy demands skyrocketed. While winterizing the grid was not foreseeable, especially for a hundred-year weather event, even for Monday morning quarterbacks, it is a stark reminder of the intermittent energy supply of sun and wind which require battery storage.

Windmills, solar panels, and batteries are not ready for prime time, will not scale, are cost-prohibitive, and will create more environmental damage than thermal sources. According to Mark Mills, Senior Fellow at the Manhattan Institute, if we want to be stewards of our environment, further pursuit of wind, solar and batteries is not the answer as they are reaching their physical limits.

To illustrate a few examples, it would take 500 years for the world’s largest battery factory, built by Tesla in Nevada, to produce enough batteries to store one day’s worth of U.S. electricity needs. Second, these alternative energy machines have a useful life of about twenty years, which is half that of gas-powered turbines creating a waste disposal crisis. IRENA, International Renewable Energy Agency, estimates that based upon current plans, disposal of worn-out solar panels by 2050 will constitute double the tonnage of all of today’s global plastic waste. Finally, it costs the same to drill one oil well as it does to build one large wind turbine. While the wind turbine generates the equivalent of one oil barrel of energy per hour, an oil well produces ten oil barrels per hour. One oil barrel of energy costs about $0.50 to store whereas you need $200 of batteries to store the same energy from a windmill.

The Left will treat the above as “unintended consequences” after implementing the Green New Deal, spending trillions, and causing massive dislocation to our economy in the process; just like Biden recently did with his penance to the Left when signing the executive order that canceled the Keystone pipeline.

Economist Thomas Sowell provided us with a simple, three-question framework to ask of any “solution” that comes from the Left: Compared to what? At what cost? What hard evidence do you have? That hasn’t stopped environmentalists from leaving a wake of destruction in their path.

It all started with the false crisis of Rachel Carson’s book Silent Spring, published in 1962, widely credited for starting the environmental movement.  Carson’s vilification of DDT has now been tossed upon the ash heap of history because she ignored contradictory evidence and deliberately omitted discussion of DDT’s benefits.

Over 80 percent of all infectious diseases afflicting humans are carried by insects or other small arthropods, in particular, the deadliest, malaria. Millions of people from poor countries died as a result of DDT bans. In Ceylon, for example, DDT use had cut malaria cases from millions per year in the 1940s down to just 17 by 1963, its banning in 1964 led to a resurgence of half a million victims per year by 1969. In many other countries, the effects were even worse.

In 1970, the National Academy of Sciences issued a report praising the beleaguered pesticide and estimated that, in little more than two decades, DDT has prevented 500 million deaths due to malaria that would otherwise have been inevitable. Minor, inconvenient facts for Rachel Carson and the hysterical environmentalists.

Climate alarmists have been wrong for the past 50 years with their apocalyptic predictions. They are 0-41. Yet that hasn’t stopped “woke” car companies from jumping on the Michael Mann-made global warming bandwagon to peddle their electric cars to feed the egos of their “green” consumers. Climate change is better known as virtue signaling for the wealthy who remain buffered from their endorsed climate policies.

Ironically, in classic socialist fashion, these cars are subsidized with “other people’s money” via the federal $7500 car tax credit. Never mind the strip mining, toxic chemical leaching, and massive water consumption of rare metal lithium extraction for non-recycled car batteries. Ignore the fact that if your electric generation source comes from coal-burning power plants, which is about 20% of the US grid, you have damaged the environment far more significantly than any gas-powered vehicle. And you still need to account for the mini toxic hazard that will have been created when it comes time to dispose of these carcinogenic, half-ton batteries.

Alexandria Ocasio Cortez, the face of the Green New Deal, was recruited by her chief of staff, Saikat Shakrabarti, from a cast of 10,000 entries, for New York’s 14th Congressional District. Saikat is the brains behind AOC, author of the Green New Deal, and said that the controversial Green New Deal was about breaking America’s capitalistic economy and replacing it with a new system, according to The Washington Post.

These neo-Marxists and authoritarians brush aside the fact that since 1990, capitalism has lifted over 2 billion people out of poverty, those earning less than $1.90 per day. Just another page from the global governance and the Davos “reset” agenda. Since over 80% of our energy comes from CO2-emitting fossil fuels, controlling the world’s energy effectively controls the world.

The Democrat’s answer to America’s energy independence and capitalistic-based freedoms is yet another wake of destruction heading our way with more job losses, rolling blackouts, foreign entanglements, and a lower standard of living.