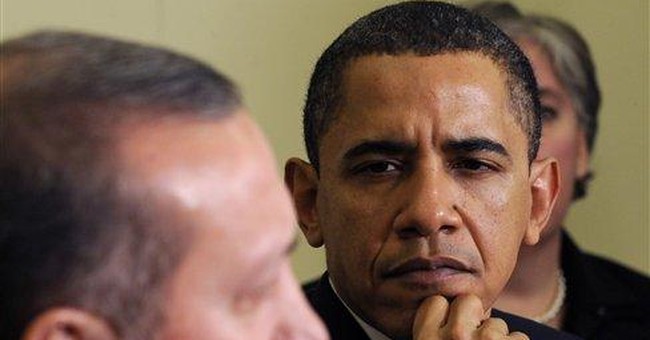 The Supreme Court heard arguments in a case over an executive-branch agency that is completely outside presidential control. Team Obama argued that the Court should keep it that way, leaving in place an agency that meddles in business affairs, but cannot be stopped by the public and for which Obama cannot be blamed.

And one other thing: It’s unconstitutional.

On Dec. 7, the Supreme Court heard arguments in Free Enterprise Fund v. Public Co. Accountability Oversight Board (PCAOB, usually called “peek-a-boo”). At issue was the constitutionality of a bureaucratic mess that Congress invented in 2002 as part of the Sarbanes-Oxley federal law that was hastily passed in the aftermath of the corporate scandals involving Enron and Worldcom.

Sarbanes-Oxley created this oversight board, the members of which are chosen by majority vote of the Securities and Exchange Commission (SEC). PCAOB has intrusive power over public accounting firms, and through them broad regulatory power involving publicly-traded companies.

The lawyer for the challengers, Michael Carvin, summed up his case in his opening argument: “The board is unique among federal regulatory agencies in that the president can neither appoint nor remove its members, nor does he have any ability to designate the chairman or review the work product, so he is stripped of the traditional means of control that he has over the traditional independent agencies.”

Democratic government requires accountability. Those in Congress are accountable to the voters (as some of them will find out in 2010), as is the president.

For maximum accountability, those who first created our government vested all executive power in one person, the president.

The Founding Fathers faced a dilemma, knowing that the president would need many people to serve under him in the executive branch of government, but that “We the People” would need a way to hold them accountable.

The Founding Fathers’ solution was the Appointments Clause. It requires that any official wielding significant power—called “principal officers”—must be nominated by the president, and then confirmed by the U.S. Senate. To avoid flooding this system with countless nominees, the Founders also created an easier system for low-ranking officials. For each of these lower officials, called “inferior officers”—Congress could vest the power to appoint that person in the president alone, or in the courts, or in the heads of the agency or department where they serve.

But you still don’t have real accountability unless you can also remove those officials. Otherwise, once you have the job, you could keep it even if you go rogue, ignoring the president and your superiors. The Supreme Court long ago held that the Constitution allows Congress to limit the reasons why a president or other official could remove an officer, but it was always understood that such limitations could not be extended to a point where an officer was no longer truly accountable.

These are the problems with PCAOB. Solicitor General Elena Kagan, speaking for the Obama administration, argued that this agency is completely under the control of the SEC, and that since members of the SEC can be removed by the president (though only for good cause), that therefore the president controls PCAOB (sort of).

It looked like five justices didn’t buy this bank-shot reasoning.

Justice Kennedy raised the point that the history and tradition—albeit brief—of how PCAOB works shows that it’s independent of SEC control. Justice Alito followed up, noting that the Court considers whether an agency is free of presidential control as a practical matter—not just on paper—and that this agency seemed completely independent.

Questioning Kagan’s co-counsel who was also defending PCAOB, Justice Scalia asked if they knew of any instance where the president could pick up the phone, call an independent agency and tell them what to do. Although the government lawyers danced around the question, it became clear that the answer was “no,” and Scalia called them on it to show that the president does not control this board.

Chief Justice Roberts put the most pressure on Kagan. Although Kagan kept emphasizing that PCAOB can’t do anything outside the control of the SEC, Roberts extracted an admission that if PCAOB demands any document or testimony—or other cooperation—from a public accounting firm and the firms refuses, then PCAOB can decertify the firm—shutting it down—and that the SEC couldn’t do anything about it. The power to shut down a business sounds pretty serious power if you work at that business.

Besides, another factor for whether an official is a “principal officer” is how money they are paid. Justice Alito got Kagan to say that PCAOB members get paid more than a half million dollars. In fact, PCAOB members are paid $547,000 a year, and the chairman is paid $673,000. Nice work if you can get it. (For comparison, the president of the United States is paid $400,000, and members of the Supreme Court are paid around $200,000.)

In the end, it looks like there are likely five votes to hold that PCAOB is unconstitutional because its members are principal officers, and therefore must be named by the president and then Senate-confirmed. The Court may not reach the issue of discussing how to treat them if they are inferior officers, though there’s a decent chance that they would strike it down on those grounds as well by holding that a majority vote of the SEC is not an “agency head,” and therefore that the current process doesn’t fit into any of the options allowed by the Constitution for appointing inferior officers.

Congress can fix this easily enough by simply passing a new law specifying that PCAOB members will be appointed by the president with the advice and consent of the Senate. So this case probably won’t have longstanding consequences for regulating public accounting firms.

One of the Constitution’s chief aims is to keep a tight leash on the federal government. America has never needed that more than it does right now.