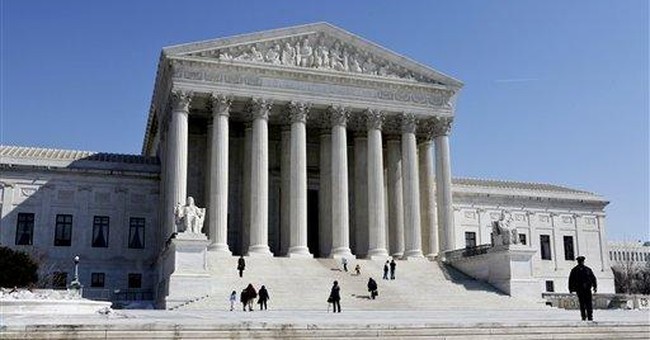 In recent months, at least three major newspapers have carried columns attempting to push Chief Justice John Roberts into voting to uphold a grossly unconstitutional federal law. But their cheap distortions and Chicken Little yammering will fail. The chief justice will do his job, and the country will be better off for it.

On Sept. 9, the U.S. Supreme Court reheard arguments in the landmark campaign finance and free speech case, Citizens United v. FEC. At issue in this case is whether the McCain-Feingold Bipartisan Campaign Reform Act (BCRA) could ban documentaries about candidates when Election Day is approaching.

This case was originally heard in April. But in June the Court called for a rare rehearing of the case, with the parties specifically arguing whether two Supreme Court precedents from the past that had upheld major restrictions on speech should be overruled, Austin v. Michigan Chamber of Commerce and part of McConnell v. FEC.

Ordinary people often have to pool their donations in corporations like public-interest groups to have enough money to get their message out on TV and radio. Perhaps too focused on how corporations in the past were mammoth operations like G.E. or General Motors with massive money to push agendas, and public-interest groups were rare, the Court held in these earlier cases that, when organizations speak, they have less First Amendment protection than the rest of us.

That’s to say, if people pooled their resources into corporate groups to speak for them, they enjoyed less free speech protection and could be more heavily regulated.

What makes this case unusual is that the swing vote is not Justice Anthony Kennedy. That’s because Kennedy wrote strongly-worded dissents in both of the precedents that the Court is considering overturning, so he’s on record as believing those cases are wrong.

So the attention shifted instead to Chief Justice John Roberts, especially since Roberts is the most stringent adherent to precedent on the Court, making him the most reluctant justice to overturn the two cases.

The Far Left is evidently terrified that Chief Justice Roberts will live up to the assurances he gave the country during his 2005 confirmation hearings. There, he said that he would give due regard to precedent, and saw a judge’s role as a modest one, applying the law to facts without regard to agendas, parties or outcomes. In doing so, he also acknowledged that sometimes precedent must be overruled.

So three spokesmen from the left wrote columns about this case, trying to sway Chief Justice Roberts.

First came E.J. Dionne, who isn’t a lawyer but plays one on TV and whenever he writes anything about the Supreme Court. Dionne writes in the Washington Post that striking down this provision of BCRA and overturning these two older cases would, “surrender control of our democracy to corporate interests.” He then adds, “This sounds melodramatic.” It sure does.

He then goes from melodramatic to hysterical when he wails, “Even the word ‘radical’ does not capture the extent to which the justices could turn our political system upside down.”

He misstates what the case is all about, although it’s unclear whether it's because he’s trying to confuse people or maybe he’s just confused himself. He says the Citizens United group objected to disclosing who financed their documentary about Hillary Clinton. No, they objected to the part of the law that said they could all go to federal prison for five years if any of their money went toward promoting the movie. Sounds different when you mention that fact, doesn’t it?

Then law professor Jeffrey Rosen wrote in the New York Times. Rosen says that striking down this part of BCRA would forever make Roberts into a conservative Earl Warren, known for activist decisions and social engineering. Ironically, Rosen cited with approval the Court’s 1964 case New York Times v. Sullivan (about suing a newspaper for defamation) that overturned 150 years of precedent.

The irony there is that he doesn’t explain why Sullivan was a good idea, but striking down the failed censorship experiment from this part of BCRA is a bad idea. He only tells us that the 1964 case was unanimous, bizarrely suggesting that Roberts shouldn’t vote to strike down this law unless he can persuade every member of the Court to do the same. (There are plenty of conservative precedents that I imagine Rosen would be perfectly happy to see overturned by a 5–4 vote.)

Then last is Stuart Taylor, the legal analyst for National Journal. Taylor fears Roberts will vote to overturn Austin and McConnell, warning that this would open him to charges of judicial activism. He advocates a “golden opportunity for principled compromise” that Roberts should instead exempt only certain groups like Citizens United from this law. He doesn’t explain how this would remove the chilling effect this law would still have on countless others, with the threat of federal prison for anyone who guesses wrong on whether they are one of these special groups.

Fortunately, the chief justice of the United States is no fool, nor is he weak. John Roberts adheres to precedent unless there is an extraordinary reason to change it. This case presents such a reason, as it violates the core guarantee of being able to speak out about public issues.

This shows the wisdom of our Founding Fathers in creating a life-tenured judiciary. These liberal talking heads can’t do anything to John Roberts, either good or bad. He holds his position for life, freeing him from political pressure so that he can uphold the Constitution without fear of consequences.

The reality is that there is nothing extreme about Justice Anthony Kennedy. Roberts vote doesn’t create a majority unless Kennedy also votes that way. Saying that joining Kennedy on anything makes you an extremist is like calling Senators Ben Nelson and Olympia Snowe a couple of militant radicals. All that does is make the speaker look silly.

There’s no guarantee as to what Chief Justice Roberts will do. But he would serve the nation well to become the fifth vote in striking down this part of BCRA, and restoring to ordinary Americans the right to hold accountable those who seek the power to govern us.