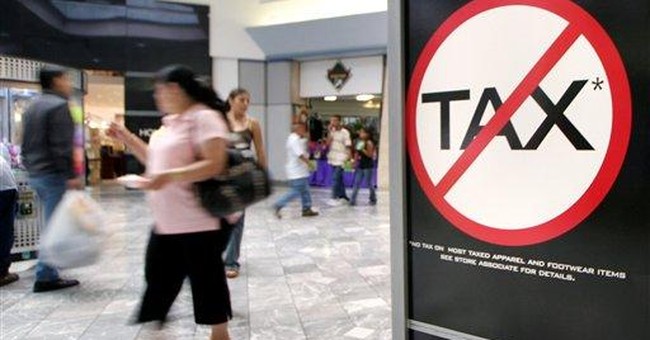 At the heart of the financial meltdown now bedeviling Americans is a simple and profoundly ignored fact that does not require an advanced degree in economics to understand: Our government spends more than it takes in—a lot more.

Sure, regulators could have done a better job but, in truth, politicians at every level have frustrated attempts to blow the whistle on bad loans, bad reporting and bad ethics. Why? Because politicians have been buying our votes with our money—and our future earnings—for a long time. And they don't want any interference from those they are "helping."

It's not just the naked bribes represented by "earmarks" for hometown voters; it is new entitlement programs like the prescription drug benefit, new rules governing the behavior of favored banks and investment houses and a headlong rush to buy the votes of the poor by guaranteeing home ownership, irrespective of one's financial ability to repay a loan. Lest we forget, let's also add up all the special tax breaks for favored contributors that have bloated income tax code rules to 67,500 pages. It's a bi-partisan betrayal of our future cloaked as concern for the common good.

Although our nation was founded on the principle that the citizen was sovereign, government spending increases and more and more taxes taken from our earnings, savings and investments have effectively transformed the American citizen into a serf working another's land for the privilege of taking a fraction of the fruits of his or her own labor.

"Trust us," we are told. "We have the best interests of the nation at heart." Citizens are now left with no rational choice to protect savings, college plans, and investments but to accept the new aristocracies' trillion dollar picking of our pockets to prop up institutions that must function. It is not the first time in recent years that we have accepted the grasping hand of the federal government in our wallets to avert a disaster not of our making.

In 1983 a "Blue Ribbon" panel of similar leaders including Alan Greenspan, Daniel Patrick Moynihan and others "saved" Social Security from another big collapse by dramatically raising taxes on earnings of up to $97,500 annually. The promise, then, was that Baby Boomers would actually "pre-fund" their own retirement with astoundingly increased taxes, decades ahead of time. It was also promised as relief to the coming generations so they would be free of crippling taxes. Sounded good.

Lo and behold, the trillions of dollars taken in since then—far exceeding promised payments to senior citizens—have since been spent on everything else. Turns out, that it was nothing more than a new tax levied on those with earnings below $97,500 a year so executive and legislative branch office holders could have more of our money to spend extravagantly on "us" so they could win new terms in office. The FICA payroll tax has become a major factor in keeping the poor that way, retarding new business growth and keeping middle-class earners from moving up. Worst, it also turns out that our children and grandchildren will, in fact, still be burdened an ever-growing and mind-numbing national debt AND unbelievably high FICA taxes to support their parents.

In yet another example of playing fast and loose with politics and our money, 1986 saw Congress reject the tax policies of the Reagan administration and as consequence, the Savings and Loan industry collapsed. Turns out the definition of the tax value of real estate holdings had been changed overnight by the House Ways and Means Committee and banks no longer met liquidity rules. That politically inspired cat fight cost American taxpayers hundreds of billions of dollars. And worse, we didn't learn.

It is past time--way past time--for hometown America to save America from our well-intentioned but criminally incompetent, at best, and cynically corrupted , at worst, national leadership. Do we have a moment to lose? Do we really need any more examples of how the new aristocracy can—and will—destroy the pursuit of happiness?

The reform that can save the nation and restore our identity as citizens who have empowered and limited government (instead of the other way around) is called the FairTax.

Because the FairTax allows every American to take home everything that is earned without any federal withholding, millions of distressed homeowners could actually afford home mortgage payments. The elimination of FICA taxes eliminates the highly regressive Social Security and Medicate tax but the FairTax provides a far broader stream of revenue into these faltering programs. Because the FairTax eliminates all exemptions, gimmicks and loopholes, Congress would be removed from the ability to buy votes with tax giveaways and billionaires pay taxes when they spend money. Because the FairTax makes nearly all federal government taxes entirely transparent, the sovereign citizen can know the score and put the brakes on extravagant new spending. Because the FairTax eliminates the price advantage now enjoyed by overseas producers, American jobs won't be leaving our shores. In fact, because the FairTax makes the USA the most favorable tax environment in the world, we can expect trillions of dollars of investment rushing into the US economy. With the FairTax, our money is ours first and only secondly devoted to government. Savings growth, investments and business decisions are guided by opportunity and real progress instead of tax avoidance tactics.

We've lost more than $2 trillion of our retirement savings in a week's time and our kid's future at college is in serious jeopardy. This didn't happen by accident but at the hands of the very same people who have given the FairTax a cold shoulder. Those candidates and incumbents of either party who would spend our future earnings to stay in office and who reject the FairTax for similarly self-interested reasons now need a strong reminder from voters about whose offices they occupy. Please pay attention to our voting guide and send that message.

Finally, our campaign needs your help—as always. We never have enough to do the job right. Send us a contribution if you can, even in these hard times. It may turn out to be the best investment you ever made. If you can't afford a donation, then help us by recruiting two new supporters. And keep your cards, letters, phone calls, faxes and e-mails going to incumbents and candidates.

The plain fact is, we either now save ourselves from our new aristocracy or suffer the consequences as modern day serfs in a nation never contemplated by our Founding Fathers.

Reagan McCarthy
Biden Taints the Chauvin Trial By Praying the Jury Gets It 'Right'
Katie Pavlich
After Mouthing Off About Chauvin, Democrats Reportedly Relishing a Push to Censure Maxine Waters
Matt Vespa