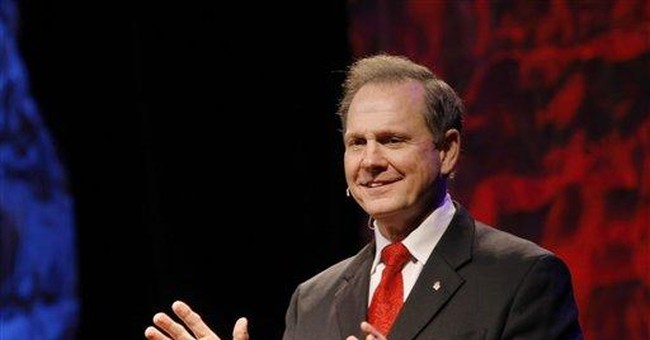 By now, most people have heard something about Alabama Chief Justice Roy Moore's order defying a federal ruling legalizing same-sex marriage in Alabama. It didn't take long for the Left's culture warriors to issue sanctimonious condemnations of the judge's order:

"This is a pathetic, last-ditch attempt at judicial fiat by an Alabama Supreme Court justice—a man who should respect the rule of law rather than advance his personal beliefs," said [Human Rights Campaign's] Legal Director Sarah Warbelow. "Absent further action by the U.S. Supreme Court, the federal ruling striking down Alabama's marriage ban ought to be fully enforced, and couples that have been waiting decades to access equal marriage under the law should not have to wait a single day longer. All probate judges should issue licenses tomorrow morning, and Chief Justice Roy Moore ought to be sanctioned."

"…[W]hat's clear today is Roy Moore doesn't care about the law. Roy Moore doesn't care about the Constitution. Roy Moore cares mostly about Roy Moore and his particular set of deeply-felt personal beliefs. His particular brand of demagoguery is not based in a failure to understand the laws he is duty bound to uphold, but in an outright refusal to do so. That's not a Chief Justice; that's an ideologue. An ideologue has his place -- in the opinion pages of the newspaper or on morning talk shows on cable news -- but he should not be Alabama's most senior jurist."

Etcetera, etcetera, all over the web, TV, and print media: Chief Justice Roy Moore is a bigot and an idiot and a bad judge. He put ideology before the law, and any judge that does so is clearly unfit to don the robes of justice.

A heated exchange between CNN's Chris Cuomo and Judge Moore has gotten a lot of attention. During an interview on the network's morning program, New Day, Cuomo implied that the Chief Justice's order was an unethical imposition of personal ideology flying in the face of the law. He accused the judge of basing his decision on personal religious beliefs and insisted that the judge has no rational basis for his argument that marriage is only between a man and a woman. When Justice Moore pointed out that the Declaration of Independence, an organic source of American jurisprudence, acknowledges God as the author of human rights, Cuomo retorted that law comes from man, not from God. "Our rights," Cuomo said, "do not come from God. That's your faith. That's my faith. But that's not our country. Our laws come from collective agreement and compromise."

Cuomo went on, peppering Justice Moore with accusations of discrimination, bigotry, and bad judgment. Moore then asked Cuomo if he would have followed the US Supreme Court's decision in the infamous Dred Scott case and Plessy v. Ferguson cases. In both instances, the highest court in the land, reflecting Cuomo's "collective agreement and compromise" version of law, flouted the Constitution's equal protection principle by allowing blacks to be owned as property and by enforcing segregation in public places based on race. Moore was making the point that Cuomo's standard of law coming from man and not from God leaves no room to dispute such ill-conceived decisions. Only a divine standard of human equality could trump the "collective agreement and compromise" of a nation steeped in racist ideology.

Would Cuomo, Moore asked, have followed the Court, or would he have objected in the name of justice for all human beings? Cuomo, conveniently avoided the question and continued with his ad hominem tactics.

America's Founders recognized the important role that a shared belief in God contributed to the stability of our society. Our second President, John Adams, declared, "We have no government armed with power capable of contending with human passions unbridled by morality and religion. Avarice, ambition, revenge, or gallantry would break the strongest cords of our Constitution as a whale goes through a net. Our Constitution was made only for a moral and religious people. It is wholly inadequate to the government of any other." Adams' son, John Quincy Adams (our sixth President), declared, "This form of government… is productive of everything which is great and excellent among men. But its principles are as easily destroyed, as human nature is corrupted…. A government is only to be supported by pure religion or austere morals. Private and public virtue is the only foundation of republics." Both presidents – father and son – understood that a shared belief in God is necessary to produce the shared values required for a stable society. Belief in God was the foundation of the republic. The very freedoms and republican form of government we embrace today require society's acknowledgment of "the laws of nature and of nature's God" acknowledged by the Founders in our Declaration of Independence.

But as our shared belief in a transcendent God disappears, our shared moral values inevitably give way to a pervasive relativism. Cuomo's own words affirmed this when he said "That's your faith. That's my faith. But that's not our country."

But Justice Moore's question regarding two of the most infamous Supreme Court rulings in the land lays bare the fallacy of this way of thinking. Just because a majority of judges on the bench at the time, reflecting the popular sentiments of the people, ruled that blacks were not full and equal humans but property to be bought and sold, didn't make it true or right. Cuomo knows, as everyone has come to recognize, that the thinking at the time was wrong. And we don't say it's wrong in hindsight because popular opinion has changed, we say it was always wrong and will always be wrong to discriminate based on race. Why? Because of self-evident truths, those inalienable rights articulated by the Founding Fathers in the Declaration of Independence:

"We hold these truths to be self-evident, that all men are created equal, that they are endowed by their Creator with certain unalienable Rights, that among these, are Life, Liberty, and the pursuit of Happiness. That to secure these rights, Governments are instituted among Men, deriving their just Powers from the consent of the governed."

The Founding Fathers observed that governments are created, not to create law ex nihilo, but to protect the rights given to us by God.

Of course, the nuance of Moore's argument is being eclipsed by the "nattering nabobs" on the Left, but hope springs eternal that the silent majority is paying attention. In anticipation of the upcoming presidential election, the American people would do well to reflect on the source of our rights and assess which candidates and which parties embrace the vision for our republic which most closely resembles that of the Founders. If our society accepts the notion that the source of our liberty is government rather than God, then that liberty is no longer secure. What the government gives, it can take away. Thomas Jefferson rightly asked, "Can the liberties of a nation be secure when we have removed a conviction that these liberties are the gift of God?" Every American should ask themselves this same question.