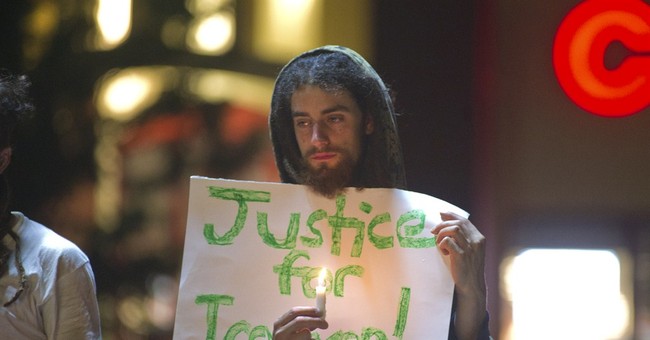 Well, it's finally over. The verdict is in. George Zimmerman was acquitted of the murder and manslaughter of Trayvon Martin.

Despite the sensationalism and emotion surrounding this trial, the State of Florida failed to meet the burden of proof required for a conviction. No words can describe the pain a parent feels at losing a child, and it's more than mere lip service to say this ordeal has been tragic for everyone involved.

It seems safe to say that neither George Zimmerman nor Trayvon Martin anticipated what would happen on that fateful night. What we do know is that there was a verbal confrontation and that a physical altercation occurred in which Trayvon Martin was the aggressor. This was enough to dissuade the jury from convicting George Zimmerman as a murderer.

As expected, an outcry has erupted in response to the jury’s verdict. "Racism won," tweeted former Obama advisor, Van Jones. Al Sharpton referred to the verdict as "an atrocity" and a "slap in the face." He's vowed to pursue justice at the federal level, and it looks as though Attorney General Eric Holder is primed to pursue civil rights charges. Jesse Jackson is "stunned."

The controversy surrounding the Zimmerman trial and the outrage at the verdict shows how courts of law differ from the court of public opinion. In the court of public opinion, perception is reality. Caricature and hyperbole are preferred to thoughtful deliberation. Facts are irrelevant. High profile cases like this are always politicized by demagogues at the ready to play on the emotions of the public in order to advance their agenda.

In this case, the demagogues were Sharpton and Jackson, and the agenda was race. According to their narrative, the Zimmerman acquittal is Exhibit A of the fact that institutionalized racism is alive and well in America. Martin was an innocent child who was profiled, stalked, and ruthlessly gunned down by a white man on a power trip. The media, which falsely claims to report the facts, played the role of aider and abettor in fueling the tension. The good folks at NBC -- that bastion of journalistic integrity -- saw fit to edit the audio recording of Zimmerman's 9-1-1 call in order to further advance the race narrative and paint Zimmerman as a bigot. Even the President got into the act. Mr. Obama (a lawyer who should know that it's best to reserve judgment until all the facts are in) couldn't resist the temptation of the race card, comparing Trayvon to his own daughters.

As a result of the early and dramatic politicization of this tragedy, Florida's governor appointed a special prosecutor, and not only was Zimmerman charged, he was "over-charged" with second degree murder. Furthermore, key evidence that was supportive of the defense's theory of the case was initially suppressed, raising serious questions about possible prosecutorial misconduct. All because two irresponsible and self-aggrandizing "civil rights" leaders chose to sow seeds of unrest and resentment. The merits of the case were of no consequence. Rhetoric was used as a substitute for facts, and emotion was the ballast used to keep the canard afloat.

Regardless of what these instigators would have us believe however, things aren't always black and white. If the trial of George Zimmerman proved anything, it proved that. Once the proceedings actually began, new facts that were not hitherto in the public domain came to the surface. Bold assertions that were made by prosecution witnesses crumbled in the crucible of cross-examination. New evidence was unearthed about who confronted whom and who initiated the fracas that resulted in Trayvon Martin's death.

Unlike in the court of public opinion, facts, not emotion, were of paramount concern. When all was said and done, a very different picture of the incident emerged. The jury's charge was to determine if George Zimmerman was a murderer, and the prosecution fell far short of meeting their burden of proof. In light of this, acquittal was the just call.

The Zimmerman case illustrates the importance of the right to trial by jury. At the end of the day, it is apparent that the courts of justice are better venues for deciding guilt and innocence than the court of public opinion. Hopefully, Americans will continue to cherish the right to trial by jury which our forefathers deemed to be the bulwark of our liberties. If not, the fate of unpopular people will forever be left to the shifting tides of public opinion.