The Politics of Personal Destruction 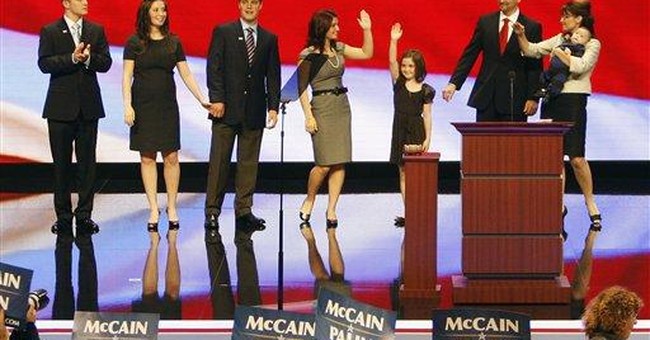 "Here ruining people is considered sport," so concluded Vince Foster in what many believe was his suicide note. "Here" is Washington D.C., and the instrument of ruination is the politics of personal destruction.

Alaska's Governor Sarah Palin is the latest person to find herself in the crosshairs of those aiming for her ruination. Her offense? She accepted Senator John McCain's invitation to be his running mate for the 2008 Presidential election. This historic milestone of a woman running on the Republican ticket was soon transformed into histrionics. Any real analysis of Governor Palin's public record was jettisoned in favor of digging up dirt about her personal life, real or concocted.

First came the snide comments on Governor Palin's looks. Most of those comments came from feminists, the same women who decry sexism and complain that too much attention is paid to how a woman looks. Nevertheless, they are the same women who keep us abreast of Hilary Clinton's changing hair styles and her preference for pantsuits. Who can forget the vitriol aimed at Florida Secretary of State Katherine Harris during the 2000 Florida recount? How she applied her makeup became more important than how she applied the law. We may have come a long way baby, but cattiness persists among the feminists.

Next, Governor Palin was attacked for being a bad mother. Suddenly the crowd who proclaims women can only find fulfillment working outside the home have become homebodies. Crocodile tears were shed over whether Governor Palin would be abandoning her children if she became Vice President. It's ironic that feminists now complain that she should be at home with her kids.

But let's not kid ourselves. Many of the folks now supporting Governor Palin's bid for Vice President would be casting similar aspersions upon her if she were Senator Obama's running mate. Their unconditional support for Governor Palin, notwithstanding her family circumstances, is, for many, an abandonment of the notion that motherhood is a woman's highest calling.

Then came the attacks on Governor Palin's family. Her husband's DUI when he was 22 years old (over twenty years ago) was trotted out to see what kind of reaction it would receive. It didn't receive much of one but hey, it was worth a shot.

The most despicable attack was directed at Governor Palin's 17 year old daughter Bristol. One columnist tried to fabricate a scandal that Trig, Governor Palin's 5 month old son, was actually Bristol's and that Governor Palin claimed to be the mother in order to avoid embarrassment and save face. The scandal was replete with pictures of Bristol from 2006, claiming she was then pregnant with Trig, a mere eighteen months prior to Trig's birth. The columnist—not one to let the facts stand in the way of a good story—still demands a note from Governor Palin's doctor before he will be satisfied.

All of this microscopic scrutiny did lead to the Palin family's acknowledgement that Bristol is indeed pregnant (five months) and that she and her boyfriend plan to marry. This, of course, led to more aspersions on Governor Palin's fitness as a mother and provided a chance to extol the virtues of condom use as the centerpiece of sex education. You see, Governor Palin believes children should not be having sex and, thus, abstinence is what they should be taught. No doubt Bristol's circumstances have reinforced her belief.

Congressman Barney Frank joined in the mud slinging by commenting that Governor Palin's home is "in great turmoil." That's the same Barney Frank who claims he didn't know that a homosexual brothel was being run out of his Georgetown townhouse some years ago.

Thankfully, the one adult in all of this has been Senator Obama. He reacted to the attacks by saying, "Let me be as clear as possible. I have said before, and I will repeat again, I think people's families are off limits. And people's children are especially off limits. This shouldn't be part of our politics. It has no relevance to Governor Palin's performance as governor or her potential performance as a vice president." The Senator went on to remind everyone that he also was born to an eighteen-year-old mother.

One blogger got it right when he wrote, "In our politics today, we don't just debate people, we destroy them." Both the left and the right are guilty of this bloodlust. The casualty count is high. No doubt many good people—people that would be of great service to the country—are reluctant to serve in public office because of the politics of personal destruction.

America will be better served if voters stay focused on the issues that face the country. Tabloid political coverage takes our focus off the important issues, and diminishes our electoral process. We can do better.