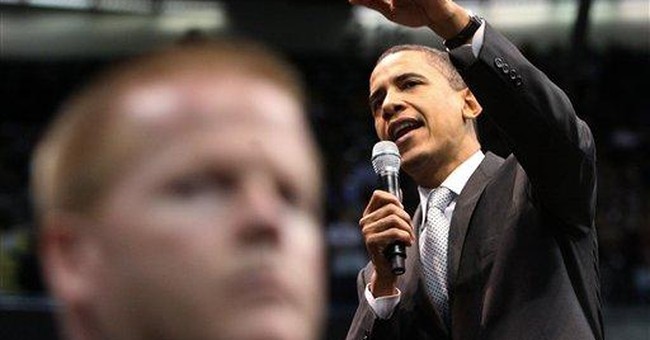 
Frustrated at her opponent's success in the quest for her party's nomination for President of the United States, Hillary Clinton has suggested that Barack Obama is all talk and no action. Obama's soaring oratory has translated into record crowds, provoked unprecedented turnout, and catapulted him into front runner status for the nomination of the Democratic Party. Clinton, who is not known for her rhetorical flourishes and who often appears wooden on the stump, has lashed out at Obama suggesting that words don't count and that a candidate's record is more important than their rhetoric.

Mrs. Clinton is right that mere talk is not enough to qualify one to serve as President of the United States, but she is wrong in underestimating the importance of rhetoric on the campaign trail. Rhetoric is profoundly important. Words really do matter.

Words are the vehicles through which we transmit ideas, and since ideas have consequences, words have consequences. Words shape our beliefs, and what we believe determines how we behave. Therefore, words inspire behavior. Mark Twain understood this when he said, "The difference between the right word and the almost right word is like the difference between lightning and the lightning bug." Obama has been more like the former. Mrs. Cinton increasingly seems more like the latter.

High among those who have shaped the course of human history, are people who understood and harnessed the power of language. America's founding began with words. The words of the Declaration of Independence inspired men to give their lives in pursuit of the ideas embodied in it. Abraham Lincoln changed the course of history when he wrote the Emancipation Proclamation. Martin Luther King's oratory inspired the nation to finally live up to the ideals of its founding. Edward R. Murrow, in lionizing Winston Churchill, said that he "mobilized the English language and sent it into battle." Three simple words, "Duty, Honor, Country", have inspired many a member of the long gray line to lay down their lives for their country.

Words are not empty vessels. They are pregnant with meaning and laden with content. They evoke images and transmit feelings. They can hurt or heal, and cause anger or heartache or comfort. The writer of Ephesians understood this when he adjured his readers, "Do not let any unwholesome talk come out of your mouths, but only what is helpful for building others up according their needs, that it may benefit those who listen." (Eph. 4:29 NIV) The writer of Proverbs acknowledged that words have impact when he wrote, "Reckless words pierce like a sword, but the tongue of the wise brings healing." (Prov. 12:18 NIV)

America seems to have lost sight of the importance of rhetoric in shaping culture and politics. Sadly, rhetoric is a subject rarely taught today in our public schools. Yet, as far back as ancient Greece, rhetoric was considered an essential part of education. Indeed, it is one of the three pillars of a classical liberal arts education (along with grammar and logic), pillars upon which all learning and understanding are based.

Mr. Obama's words will inspire ideas and those ideas will have consequences. Whether they are the right ideas for our time will be up to the voters to decide in November. In the meantime, however, we should be thankful for the renewed interest that his campaign is sparking on the importance of rhetoric in the shaping of a society.