Ken Blackwell
|
Posted: Jun 14, 2019 12:01 AM
Share   Tweet
The opinions expressed by columnists are their own and do not necessarily represent the views of Townhall.com. 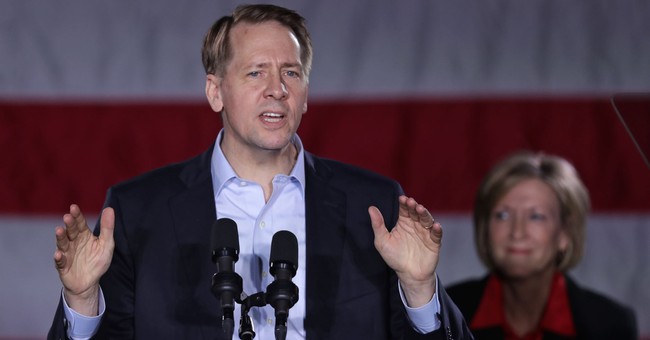 As college graduates have their commencement celebrations, they certainly hope their hard work will pay off. After all, in the booming Trump economy and with record low unemployment, there are countless opportunities for entrepreneurship and success.

Sadly, there is one reason why those dreams may never get off the ground: crushing school debt. As too many students and parents are painfully aware, there are more than 44 million borrowers in America who collectively owe $1.5 trillion. Because of these obligations, young adults are putting off essential milestones in life - such as buying a home and getting married - while not accumulating savings.

They have been saddled with debt by a higher education industrial complex thanks to the assistance of the Federal Government. Now, thanks to some Obama administration decisions, the problem might become even worse!

Before his disastrous campaign for Governor of Ohio, Richard Cordray was an Obama administration holdover running the Consumer Financial Protection Bureau (CFPB). What we are now learning is Cordray likely exceeded the scope of his authority with a proposed "consent judgment" against the National Collegiate Master Student Loan Trusts (NCMSLT) in September 2017. This decision deserves more attention, as it threatens the Trump economic boom by potentially hurting America's financial marketplace and freezing the credit industry.

The NCMSLT Trusts are passive investors who own $12 billion of student loan assets, which originated in multiple banks - such as Bank of America and JPMorgan Chase - more than a decade ago. Pension plans in insurance companies subsequently financed them through securitization capital markets transactions. In laymen's terms, securitization helps the economy because it enables investors to fund consumer and student loans, which also lower interest rates for borrowers.

Under Cordray's direction, the CFPB made allegations about debt collection servicers on delinquent student loan balances. But instead of going after those debt collectors, they decided to also go after the NCMSLT itself, without any statutory authority to do so.

Cordray's decision was a classic D.C. swamp move. While presenting a facade of being tough on debt collectors, he put major Obama donor Donald Uderitz, the founder of a hedge fund with equity ownership of the NCMSLT, in a unique position to shut out other investors and usurp control over them. CFPB turned over access and control of the student loan debt services to Uderitz, allowing him to make a substantial income from something that would have otherwise not have been profitable. Cordray's actions are what real cronyism and collusion look like.

As Breitbart's Sean Moran reported, House Republicans are speaking out against CFPB's alarming actions against the NCMSLT. A letter signed by Reps. Sean Duffy (R-WI), Lee Zeldin (R-NY), and Ted Budd (R-SC) has been sent to CFPB Director Kathy Kraninger, urging her to withdraw the Obama-era consent judgment. They noted the actions would "penalize innocent actors, including pensions plans, retirement plans, and by extension the consumers that have entrusted their savings to them, for a third party's alleged misconduct."

Thankfully, Director Kraninger is a capable and experienced leader who has demonstrated a commitment to efficient and limited government. She should keep working to return the CFPB as an institution that abides by our Constitution.

Strong and stable credit markets are essential to economic growth. It's time for Director Kraninger to withdraw the consent judgment to help prevent escalating student loan interest rates and protect the structural integrity of our capital markets before it's too late.