The Path to Post-Convention Unity

Ken Blackwell
|
Posted: Apr 27, 2016 12:01 AM
Share   Tweet
The opinions expressed by columnists are their own and do not necessarily represent the views of Townhall.com. 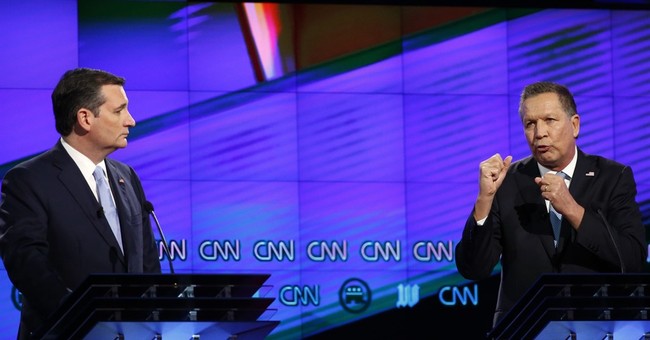 The media almost always is more interested in process than substance. So it’s been big news that Ted Cruz and John Kasich are cooperating in their effort to stop Donald Trump from winning a majority of delegates and thus the nomination. Of course, the Trump campaign has cried foul, though he should relish the opportunity to demonstrate that the majority of Republicans back him.

The media is focused on the possible political impact of the Cruz-Kasich pact in a convention fight. Yet hopefully the agreement will provide a lesson for whoever ends up as the nominee. Republicans need to work together to win in November.

This election campaign has been incessantly negative. A lot of that has revolved around Trump, both his attacks on other candidates and their return fire. The SuperPACs have joined in, spending far more to carpet bomb opposing candidates than build up their favorites. Those who talked most vehemently about the need for just one candidate to take on Trump often were most free with their attacks on everyone else.

Of course, Ronald Reagan’s Eleventh Commandment about not speaking ill of another Republican always was honored more in the breach, including by Reagan. And we’ve had plenty of negative election campaigns over the years. However, listening to the GOP candidates left one feeling that they all had lost sight of the overriding objective this year: electing a constitutional conservative determined to reverse America’s disastrous course.

Compare the depth of the respective political benches. Democrats had the same tired old Clinton Machine and a self-proclaimed Democratic socialist. A couple other unknown candidates never rated much more than an asterisk in public support.

In contrast, Republicans had governors, senators, former presidential candidates and public officials, a businessman and woman, and a neurosurgeon. All of them could have done the job and several of them rated significant support in different states. Behind them are a majority of senators, congressmen, governors, and state legislators across the nation.

There is no question which party is better prepared to govern, and govern well. At least, if it can unify.

Which is why the example of Ted Cruz and John Kasich working together is so important. For a moment they stopped attacking each other and recognized that they faced a common threat. Right now the latter happens to be another Republican. But after the convention it will be the Democratic Party nominee.

We don’t know who that will be yet, of course. Most people assume Hillary Clinton, but she might not get off after recklessly compromising U.S. security with her insecure emails. It’s still possible for the Vermont Senator who believes everything should be free for everyone to grab the nomination. And if Clinton is forced from the race Vice President Joe Biden might make an appearance, representing President Obama without the sneer.

If any one of these becomes president, America’s future will be grim. The Supreme Court will be lost. ObamaCare could be replaced by a Canadian-style single-payer system. The annual budget deficit, already headed back toward a trillion dollars, will explode. Crises overseas will multiply.

Who wants to live through a third Obama term?

After the GOP convention, the former contenders need to rally around the winner, and not just in a pro-forma way. They must put their various organizations and networks behind the nominee. They need to convince their respective supporters that it is important to back the candidate, whoever he is. And they should make the case to the rest of the American people.

They also need to lend their knowledge and expertise to the nominee—who needs to make use of it. As a group the Republican candidates know how to govern states, live within budgets, manage bureaucracies, make business deals, address international issues, run a Fortune 500 company, and get elected in very different states. All this talent also would be useful for the Republican after, hopefully, he is elected president.

In contrast, all the Democratic nominee will know is how to raise taxes and spend taxpayers’ money. And do it again, even more so. Hillary Clinton, Bernie Sanders, and Joe Biden have been politicians their entire lives.

It really doesn’t take a village to raise a child. But it does take a united Republican Party to defeat the gaggle of interest groups which run the Democratic Party and are determined to use the federal government to live off of everyone else. However the nomination fight turns out, Cruz and Kasich are showing the eventual nominee and the rest of the candidates the way to victory in November.