Ken Blackwell
|
Posted: Mar 12, 2016 12:01 AM
Share   Tweet
The opinions expressed by columnists are their own and do not necessarily represent the views of Townhall.com. 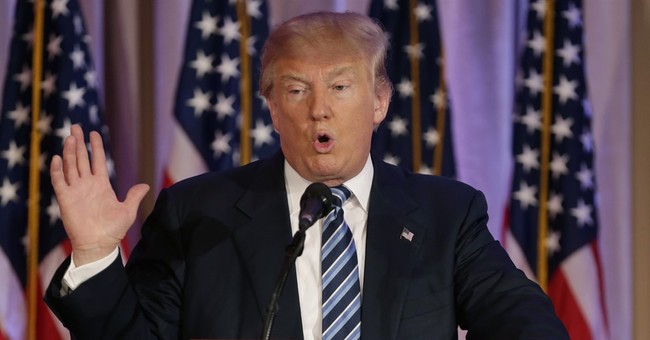 Carly Fiorina quizzed her fellow candidates during the first “under card” presidential debate. She asked if any of them had received a phone call from Bill Clinton prior to announcing their entry into the race. None had. And if you’d asked that question of any of those in the Prime Time debate, only one would have answered yes: Trump.

So it’s worth considering what Bill Clinton may have had in mind in talking with Trump.Bill knows that despite Barack Obama saying in 2008 that “you’re likable enough, Hillary,” Hillary is really not “likable enough.” It is a serious problem. Real liberals—who constitute the base of the Democratic Party--do not like her. Or him.

This would be an insurmountable problem in the general election—unless something dramatic happened to assure that her Republican opponent was even less likable. Bingo!

What could better guarantee that happy outcome for Bill and Hillary than to sow hatred and division among the resurgent Republicans? What could better assure a scorched earth Nixon-style victory in November than the surety of a split opposition?

Now, dear reader, before you dismiss this as conspiracy theory Moonbattery, let’s consider some realities. Liberal journalists and Democratic activists have been laboring to hang the racist label on Republicans for a generation. They have, unfortunately, largely succeeded in the black community. But their real goal is to create a similar aversion for Republicans among Hispanics, the fastest growing minority group.

How better to do that than to have someone like that Trump running around yelling about categorically rounding up and deporting millions of Hispanics who have entered the country illegally.

Bill and Hillary Clinton know what that deportation would look like. They did it on a micro scale when they seized little Elian Gonzalez on Easter Sunday morning in 2000. The photograph of that capture of a terrified six-year old won the Pulitzer Prize. Bill and Hillary would like to see ads—not featuring their snatching the child, of course—but ads showing how Trump’s Roundup would look. We know that it would look like the grab of Elian—millions of times over.

This specter would be presented in Spanish-language media thousands of times in ads, videos, and columns. The Democratic Party would spare no effort to spread fear and hatred throughout barrios in our country.

We know they will do this because they have done it. Joe Biden infamously claimed to a black audience that Republicans would “put y’all back in chains.” He ignored the simple fact that no Republican had ever done this and that from 1791 to 1864, it was the Democratic Party that assured black people would remain in chains.

With Trump calling Hillary a liar and Bill a sexual predator, some may find it hard to credit that he was egged on by Bill and Hillary. Still, Bill Clinton is a genius, an evil genius. Bill Clinton knows that some stories cannot be spiked. Newsweek had decided not to run the story of his affair with young Monica Lewinsky. Matt Drudge decided otherwise. The Drudge Report of 1998 proved that we’ve entered a new era in media coverage. The old “gatekeepers” have been consigned to the Sunday TV talk shows. The Internet rules now.

So if he knows coverage of his philandering cannot be suppressed, what’s the next best thing? Let those stories be peddled by Trump. Trump the Birther. Trump the Truther. Trump the peddler of all notions wild and weird.

We have a perfect example of this phenomenon in one of Hillary’s former rivals. There was good reason to suspect that Sen. John Edwards was having an affair with one of his campaign film crew. But since the story had first surfaced in The National Enquirer, serious journalists avoided writing about it. Until, that is, they could no longer avoid it.

Bill Clinton knows that if Hillary wins, it will only be through Americans’ mental exhaustion and moral disgust with the entire political system. He is willing to stink up the process so long as he gets the power he craves.

Henry Clay famously said he’d rather be right than be president. Bill Clinton would rather be president and leave aside the question right and wrong. After all, what is right?It all depends on what your definition of is is.

George Stephanopoulos gave us the key to the character of Bill and Hillary. “The Clintons have no shame and that’s a great advantage in politics.” So, might Bill have urged Trump to enter the fray? Why not? Shameful is as shameful does.