A Muslim Leader who Should be Heard this Christmas 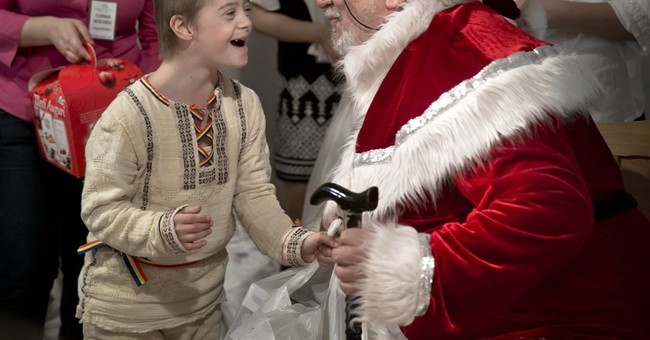 These words of Jesus represent the true essence of Christmas and this special season.

This is the time of year to wish for God’s blessing in the upcoming year. But it is also a time to reflect upon what happened during the year that is about to end.

The world news this year has unfortunately been filled with horror, and the last months of the year brought that horror disturbingly close to home. The carnage in San Bernardino showed that the threat of Islamic extremism recognizes no boundaries and that the sense of security President Obama expressed earlier in 2015 was ill-advised.

And as we usher in 2016, which is an election year, one of the main issues of the day has again become terrorism and how to handle it, especially in the form of the Islamic State and Islamic extremism as a whole.

This phenomenon is a danger not only to our national security but also to the cherished values of civilized society. It has targeted the very concepts of cultural and ideological tolerance and has tried to undermine friendship and coexistence between Muslims and Christians which are part of the fabric of our society in the modern era.

In fighting Islamic extremism, a strategy is needed. It includes decisive military, intelligence, and law enforcement measures; but that is not enough. Part of a coherent strategy is identifying our allies in this battle and reaching out to them. And the best such allies are moderate Muslim leaders who are willing to stand up to Islamic extremists in word and deed, especially those who possess legitimacy among the same people who are living under the thumb of extremist groups.

A prime example of such a leader is Maryam Rajavi. As the head of the Iranian opposition, she is leading the charge to overturn the rule of the ayatollahs that effectively brought political Islam into the modern world and turned extremist ideology into a global force. It was after the revolution of 1979 in Iran that high-profile hostage-takings became a means of governance and bombings, suicide attacks, and assassinations became the modus operandi for a theocratic state.

As a practicing Muslim, she has been fiercely pushing back against the ayatollahs’ extremism for decades. A true believer in a democratic, moderate, tolerant interpretation of Islam, Rajavi believes anything that promotes terrorism or dictatorship is counter to the teachings of Islam, as is anything that violates people’s freedoms or denies equality to women.

By embodying this modern, tolerant Muslim faith, Mrs. Rajavi has helped to demonstrate the error of attributing this year’s barbaric crimes to Islam itself. And by advocating on behalf of that faith, she urged other Muslims to avoid remaining on the fence during the conflict that will likely define the year 2016. She had emphasized that Muslims who believe in democracy are the most effective force that could fight and defeat this global danger.

Mrs. Rajavi certainly understands and accepts the sacrifice that is involved in taking part in this fight. The Iranian regime executed some 120,000 members of the People’s Mojahedin Organization of Iran (MEK), the main Iranian opposition movement and the primary component of the coalition that she leads. One of her own sisters was executed by the ayatollahs and another by the regime of the Shah.

Yet she and her movement have not wavered.

In her message on the occasion of Christmas and the New Year, Mrs. Rajavi wished “that 2016 would be a year of unity and victory over Islamic extremism and especially the religious fascism ruling Iran and its evil allies in the Middle East who sow the seeds of enmity in the world.”

Her message is made timelier by the fact that this year Christmas coincides with the celebration of the birth of Mohammad in the Muslim world.

Mrs. Rajavi used her Christmas message to underscore her view on the need for unity in the fight against Islamic terrorism: "Muslims and Christians can rely on their common values to stand up to those who pervert their religions. So, in contrast to what the extremists want, we should make our hope and faith in humanity deeper than ever.”

We can all share with her hope for a swift end to extremism, for the freedom of various peoples from the dictatorships of Bashar Assad, Ali Khamenei, and ISIS (ISIL) terrorists, and for an end to persecution of Christians throughout the Middle East and Christian converts in Iran from the oppression of the ruling mullahs.

Because her hopes for the coming year are the same as the hopes that are traditionally cherished in the West, she should be listened to this Christmas.