Iran: Withdraw The Welcome Mat For Rouhani At The UN 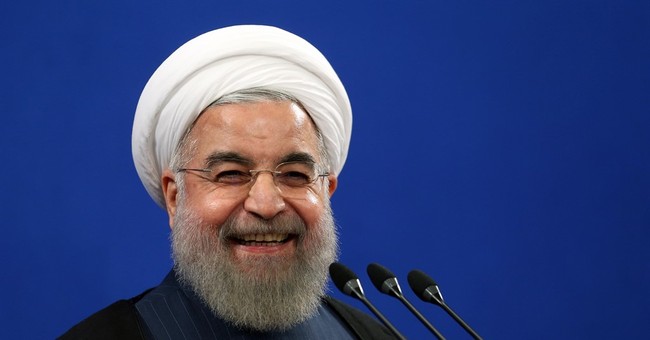 The United Nations officially came into existence exactly 70 years ago when its charter was ratified. It was supposed to be a force for peace, coexistence and respect for human rights.

According to the Preamble of the UN charter, “We the peoples of the United Nations determined… to save succeeding generations from the scourge of war… to reaffirm faith in fundamental human rights, in the dignity and worth of the human person."

Next Monday, on September 28 Iranian President Hassan Rouhani is scheduled to address the UN General Assembly. That podium has hosted many bad characters who have used it to advocate their sinister policies. But Rouhani’s presence stands out precisely because he blends in better than many of his predecessors.

Rouhani tries to falsely depict himself as a “moderate” “or a “reformer” worthy of the trust and engagement of the international community, first and foremost the US. And this charade has only been emboldened by the nuclear deal with which the Obama administration handed a range of unwarranted concessions to Tehran and failed to accomplish its goal of cutting off Iran’s pathways to a nuclear weapon.

But even if we overlook the nuclear deal, the Rouhani administration’s treatment of its own people can leave no doubt about its true character.

According to Amnesty International and other respected human rights organizations, the human rights situation in Iran is fast deteriorating under Rouhani. There have been some 2,000 executions in Iran in the two years that Rouhani has been in office, more than in any similar period in the past 25 years. Iran holds the record of having the most executions per capita in the world, and is the biggest executioner of juvenile offenders.

On July 23, Amnesty International provided a shocking report on “Iran’s staggering execution spree.” It said nearly 700 were put to death in Iran in just over six months. This is equivalent to executing more than three people per day. At this shocking pace, Iran is set to exceed 1,000 executions for the year, far surpassing the total number of executions recorded by Amnesty International for the country in 2014.

“Iran’s staggering execution toll for the first half of this year paints a sinister picture of the machinery of the state carrying out premeditated, judicially-sanctioned killings on a mass scale,” the report declared. And it is not just killing that Iranians have to work about. Inhuman and degrading punishments like amputation and gouging out eyes have also been on the rise.

Not only does corporal and capital punishment extend to non-violent offenders, it is also used to target people whose only crime is political dissent, such as Gholamreza Khosravi, an activist of Iran’s principal opposition, the People’s Mojahedin Organization of Iran (PMOI/MEK) who was hanged solely for providing financial assistance to a television network supporting Iran’s political opposition.

Such a network and such activists are always working to safeguard the rights of Iran’s many marginalized groups, including women and ethnic or religious minorities. But executions of these minorities have also increased dramatically.

Iran is one of the 10 countries listed as the worst persecutors of Christians. A number of Christian priests are incarcerated for advocating their beliefs. Saeed Abedini, an Iranian American Christian pastor has been detained in Iran since the summer of 2012 for practicing his faith.

Misogyny is at the heart of the regime’s theocratic rule. In October 2014, In defiance of international appeals, the Iranian regime executed Rayhaneh Jabbari, a 26-year-old woman whose crime was defending herself against an intelligence agent who had attempted to rape her. Amnesty International called the execution “another bloody stain on Iran’s human rights record.”

Iran is the largest prison for journalists in the Middle East; dozens of journalists are being detained today. And this is only one aspect of the regime’s attempt to control information throughout the country. It is one of the largest consumers of Internet censoring and filtering equipment. It blocks around five million websites dedicated to arts, social issues, and news, and works hard to filter the content of blogs and social media.

Rouhani might try to dodge responsibility and blame all this on other bad actors in the Iranian regime, but Tehran has been masterfully playing this game of good cop-bad cop for long time. But when one looks closely, it’s impossible to deny that the good cop and bad cop are one in the same.

In the summer and fall of 1988, 30,000 political prisoners, primarily members and activists of the MEK were massacred in a matter of a few months. Rouhani was a senior official in the Iranian regime then, already having secured his status as a regime insider. More telling is the fact that Mostafa Pourmohammadi, was one of the three people who sat on the “death commission” that sent these political prisoners to the gallows in “courts” that mostly convened for less than one minute. Today he is Rouhani’s Minister of Justice.

And on the issue of war and peace, the Middle East is raging in unprecedented wars in Syria, Iraq, and Yemen and it is common knowledge that Tehran has been playing a major role in all three wars, in particular in the carnage in Syria where it is giving full-fledged support to Syrian dictator Bashar Assad.

Iranians are asking for their basic rudimentary rights, which have been trampled under this regime. All the UN delegates have to do to see and hear about what Iranians are demanding is to listen to the Iranian dissidents who will gather in New York on September 28 to take part in the “Voices of Iran” rally to denounce the deteriorating state of human rights and the recent wave of executions during Rouhani’s tenure. They will be joined by a bi-partisan group of U.S. dignitaries and members of Congress including former UN ambassador Bill Richardson, former Homeland Security Secretary Tom Ridge, and Dr. Alan Dershowitz.

The seemingly complex issue of Iran is actually rather simple. If you reward bad behavior, all you get back is more bad behavior.

So do not throw down the welcome mat for Hassan Rouhani in New York when he still represents a regime that sponsors terrorism and ruthlessly suppresses its population.

Ignoring ongoing human rights violations in Iran as well as the growth of terrorism and meddling in the region will only embolden the regime and allow it to continue brutal crackdowns and escalating violence.

As Edmund Burke said, “The only thing necessary for the triumph of evil is for good men to do nothing.”

If we welcome Rouhani in New York but do not take the opportunity to exert serious pressure on the topic of human rights, we will have done nothing.

But we can use the September 28 visit to add to the world’s awareness about the millions in Iran and around the world who are calling for regime change, freedom, and democracy in Iran.

After all, this would be in keeping with the principles originally guiding the formation of the United Nations, wouldn’t it?