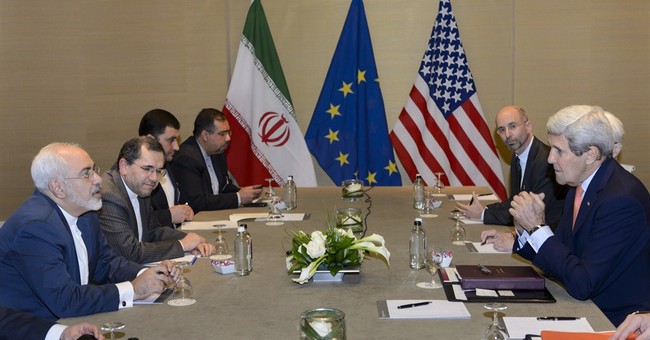 If you’re paying attention to the Middle East today, you’re paying attention to Iran. The Islamic Republic has its hand in a number of regional conflicts, in addition to its long-standing support for Middle Eastern terrorist groups. And of course this comes at a time when Iran could also be on the verge of potentially inking an agreement with six world powers which would give it relief from sanctions related to its work on nuclear weapons technology.

If you are paying attention to the Middle East, and thus to Iran, it would be prudent to also pay attention to France later this week. If you keep your eyes on Paris on June 13, you will witness to a powerful demonstration of opposition to Tehran’s clerical regime. The rally organized by the Iranian Diaspora in support of the opposition National Council of Resistance of Iran is enormously relevant to questions about how Western policymakers should be dealing with the Islamic Republic during this complex time.

In particular, another view on Iran will provide Americans and Europeans with a better understanding of how the international response to Iran’s behavior can be expected to impact the Iranian people themselves.

It is already well understood that those people have suffered gravely during the previous thirty-six years. And unless observers are blinded by the superficial change in Tehran’s willingness to talk to the US during the presidency of Hassan Rouhani, it should be clear that this suffering is now escalating as even more Iranian citizens are put to death in Iranian jails or subjected to long imprisonment for dissent and activism.

These trends indicate that the regime we are dealing with today is the same violent, religiously extremist regime that drove so many of its citizens to flee the country or face death after the Iranian Revolution. On June 13, the NCRI with the People’s Mojahedin Organization of Iran (Mek), the principal organized opposition at its core, will speak with one voice on behalf of these people and their long experience in fighting that regime.

The NCRI used last year’s Paris rally as an opportunity to speak out against the optimistic and conciliatory tone of nuclear negotiations that still have not been resolved a year later. The NCRI emphasized that by giving away sanctions relief in response to very limited restrictions on the Iranian nuclear program, the West would be giving undue legitimacy to a government that has a long history of deception and that had been under severe pressure from both the international community and its own population.

Last year, that message was hear in-person by an estimated 100,000 people, and this year the crowd is expected to be even larger. Of course a good number of the attendees are Iranian exiles and supporters of the resistance. But also, each NCRI rally enjoys the support of nationals of other countries and a politically diverse group or dignitaries from across the globe. It is a rare showcase of bipartisan support between American Republicans and Democrats who are as far apart as John Bolton and Howard Dean – both scheduled to speak on at the June 13 event that will also address the key and challenging issue of how to combat Islamic extremism.

It is my hope that this event will be the site of even greater foreign support for NCRI – not just among politicians and academics, but also among members of the American public who care about the future of Iran and its people.

I agree with Mrs. Maryam Rajavi, president of NCRI, that the nuclear negotiations have been misguided at best, and have resulted in the US giving away crucial leverage that might otherwise have led to massive positive change from inside of Iran. The trouble with the narrative provided by President Obama on Iran has absolutely failed to make the distinction between the people and the government of Iran.

Of course, that distinction should be obvious. The government does not speak for the people, while the people despise their repressive government. The Iranians in the resistance are worth listening to. They are overwhelmingly pro-Western and pro-democracy. The oppose the mullahs who keep raising their demands at the negotiating table, while directing global terrorism, holding Westerners hostage, and expanding their human rights abuses at home.

Americans should closely follow coverage of the June 13 rally in order to understand why the current American policy on Iran is wrong.

For far too long, the Iranian people have been virtually absent from policy calculations and from the public consciousness when it comes to Middle Eastern affairs. The occasion of the June 13 gathering in Paris is an opportunity to correct this situation. And current circumstances lead me to believe that the people of the United States may at last have the political will to push their leaders in this direction.

Given the prominence of discussions about Iran and its consequences, I think it will be wise to seek out all the news coverage that one can find of the event. It will be wise to familiarize yourself with Maryam Rajavi’s ten-point plan for the future of Iran, and listen to exiled Iranians’ as well as American politicians’ impassioned pleas for an end to the legitimization of terrorism and human rights abuses that emanate from the Tehran Ayatollahs. And if you agree with the message you find there, please let your representatives know that you expect them to listen to the voices of the Iranian people before making any further policy decisions in dealing with the Iranian regime.