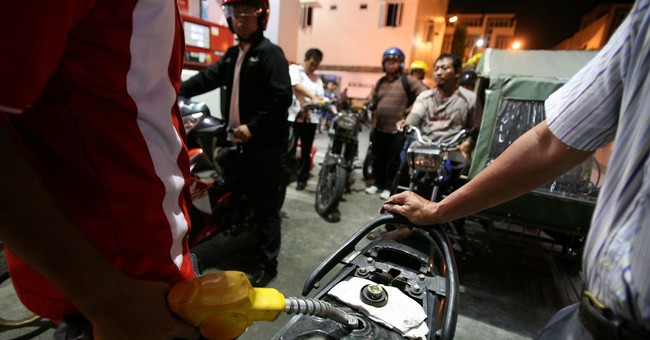 Four decades ago this month, members of the Organization of the Petroleum Exporting Countries (OPEC) launched an oil embargo against the United States in retaliation for our steadfast support of Israel in her hour of need. As the Jewish State fought off the Soviet-backed Egyptian and Syrian armies in what would become known as the Yom Kippur War, the OPEC cartel’s actions sent the price of oil soaring and our economy into a recession.

Sadly, 40 years later, we have not learned the appropriate lesson from that experience: We must disconnect our oil-dependent transportation sector from OPEC and the associated national oil companies that together manipulate the global oil market to harm America. Americans are vulnerable to OPEC’s manipulation in large measure because oil is the dominant fuel of the American economic engine, and because it holds a monopoly position in our transportation sector, accounting for 93 percent of its fuel base. Therefore, even as oil prices skyrocket, American motorists and businesses have no choice but to spend more.

In the years since the embargo officially ended, OPEC and national oil companies have leveraged this structural vulnerability to their benefit. They have done so by sticking to an anti-competitive playbook that enriches their coffers and weakens our economy.

First, they have continued to manipulate global supply by cutting and expanding production. These steps have at times forced Americans to pay a premium above what a truly free market would bear, and at other times collapsed the price of oil low enough to disincentivize entrepreneurs from innovating to develop scalable alternative technologies to oil in transportation. OPEC’s actions constitute an assault on market principles, rather than the functioning of a genuinely free market.

Second, many national oil companies under-invest in new advanced recovery technologies and production that could put added supply into the global market and thereby lower prices. Instead, these regimes divert oil revenue to popular spending programs designed to pacify restive populations – or worse, they use oil revenue to finance a host of destabilizing and dangerous activities, from nuclear weapons and terrorism in Iran, to religious schools that breed intolerance and violence throughout the Middle East.

Through underinvestment and market distortion, OPEC members have earned enormous profits at our expense. OPEC annual export revenue has exceeded $1 trillion in each of the last two years, and more than $1 trillion in wealth was transferred from the United States to OPEC members in the form of oil payments between 2005 and 2012.

According to an analysis commissioned by Securing America’s Future Energy, in 2007 alone OPEC’s manipulation of supply cost Americans at least an extra $115 billion in higher gasoline prices – extracted rents that we could have invested in our own economy, rather than sent to regimes that are ultimately hostile to our values and interests. This number does not include the untold resources expended by the U.S. military to patrol and protect oil lanes and infrastructure, especially in the Persian Gulf.

However, if Washington puts in place the right policies that both expand domestic production and reduce oil consumption, we can limit our exposure to OPEC.

The Obama Administration should stop stymieing the oil and gas industry from producing more here at home. In recent years, thanks to the private sector’s entrepreneurs and engineers who have pioneered advanced recovery techniques, America’s domestic oil and gas production, once thought moribund, has boomed. Last year, domestic oil production grew by approximately 14 percent, up to a level not reached since 1997.

In turn, a portion of the revenue generated by the new drilling on federal lands and waters should be invested in an R&D trust fund to help develop new technologies to diversify our transportation fuel base, as well as use oil more efficiently. This would produce the necessary basic innovation without raising taxes, and without government picking well-connected corporations as winners and losers, as was the case with Solyndra.

I am deeply concerned by the apparent politicization of government programs under the Obama Administration in support of electric vehicle development. Yet, electric vehicle technology is actually uniquely advantageous in the fight against OPEC, because electricity can be fueled by multiple sources, including coal, natural gas, and nuclear. Ohio coal should be burned to generate electricity used to power electric vehicles and, as a result, displace oil-based gasoline. We should invest in innovative research to foster oil displacement, not an environmentalist agenda.

We cannot idly sit by as OPEC continues to rig the global oil market to our detriment. American fiscal and national security demands that we finally get serious about producing more and consuming less.