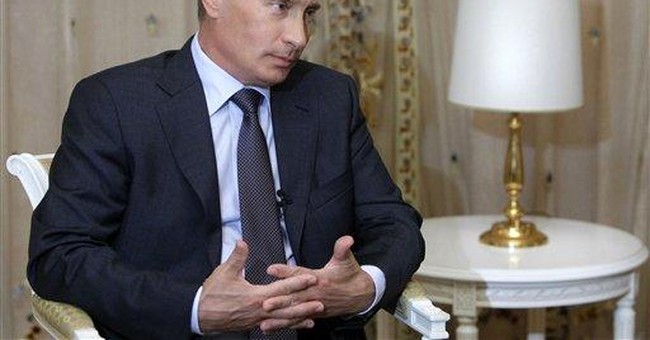 It is summer vacation in Russia and Kremlin muscle man Vladimir Putin is flexing once again. Internet photos show the ripped Premier riding shirtless on horseback. He’s projecting anything but the image that Vice President Joe Biden recently gave us of a Russia in decline. Biden tried to say that Russia’s population decline-- Russian women average nine abortions in their lifetimes-- is a sign of trouble ahead for the former superpower. (Biden’s bid to fund Planned Parenthood’s 350,000 annual U.S. abortions would seem a bizarre response to what he says is killing off Russia’s future.)

Biden’s stumbling over Russia policy came after President Obama very publicly showed disdain for the real strongman in the Kremlin. While in Moscow, the President played up to Putin’s puppet, Dmitri Medvedev. And that misstep occurred after Secretary of State apologized, in effect, for George W. Bush’s Russia policies, but couldn’t find her “reset” button.

Bush famously met with Putin back in 2001 and reported he had looked into the Russian’s eyes and could see his soul. He said Vlad was a good man. Bush took a lot of heat, mostly from his own base. Conservatives quoted former Soviet dissident Vladimir Bukovsky’s comments at the time of the Bush-Putin meeting. “I have looked into many eyes of KGB agents and I did not see good men.”

To Bush’s credit, however, he quickly and quietly reassessed his first impressions and put the Russia-U.S. relationship on a more realistic basis. Bush and Obama could do no better than to remember Ronald Reagan’s famous words: Trust, but verify.

It’s not just his biceps that Putin is flexing. For the first time since the end of the Cold War, there are Russian nuclear submarines off our Eastern Seaboard. We may think we won the Cold War. Reagan is credited-- even by liberals like Bill Clinton-- for winning the Cold War. But nobody has asked Putin about this.

Americans are waking up to the negative impact of President Obama’s economic and health care plans. They are worried, they tell pollsters, about the looming deficits. Bush deficits were unconscionably large-- but Obama’s deficits will be four times as great.

It may take longer for Americans to see the consequences of a U.S. foreign policy of weakness and apology. But we are being watched. Russia is not sleeping. Putin is preparing. And those submarines are shadowing our coasts. Just remember, in Russian, akula means “shark.”