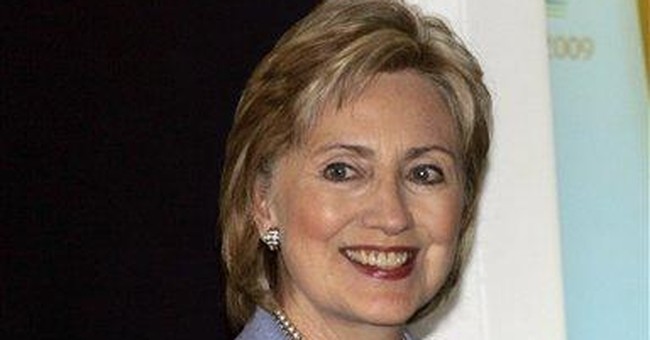 Recently, Secretary of State Hillary Clinton was described by liberal blogress Tina Brown as wearing a burqa—a foreign policy burqa fashioned for her by President Obama. That was a jarring thought. Then, the Secretary proceeded to India, where she continued this administration’s dangerous policy of apologizing everywhere for past U.S. policies. I called it her “Saari” tour.

Still in Asia, she moved on to Thailand for an international security conference. Madame Secretary talked about an umbrella: "We want Iran to calculate what I think is a fair assessment: that if the US extends a defense umbrella over the region, if we do even more to support the military capacity of those in the Gulf, it is unlikely Iran will be any stronger or safer," Clinton said.

The last major world figure to substitute his “umbrella” for sound defense policy was Neville Chamberlain—at Munich. Mrs. Clinton is describing a “defense umbrella” that she and President Obama think will somehow calm jittery allies in the Persian Gulf. The idea seems to be that just as the U.S. extended its nuclear umbrella over Western Europe so successfully for 50 years, the Gulf states can rest assured that America will be there to protect them—when the Iranians develop their nuclear weapons.

There’s a fundamental—even radical—flaw in this umbrella line of thinking. The Soviets could be deterred by the sure knowledge that the U.S. had the power to utterly destroy them. As Khrushchev said to Mao Zedong when the two communist dictators met: “The U.S. may be a ‘paper tiger’ as you call it, but that paper tiger has nuclear teeth!”

Who says an Iranian nuclear weapon has to be launched by missile? Why couldn’t the Iranians slip it into Israel in a truck? Or detonate it aboard a small boat off Haifa?

The fundamental flaw in Obama administration policy comes from the top—from Barack Obama’s failed understanding of the nature of the adversary we face in Tehran. President Obama told his Muslim listeners in Cairo last month:

And any nation – including Iran – should have the right to access peaceful nuclear power if it complies with its responsibilities under the nuclear Non-Proliferation Treaty. That commitment is at the core of the Treaty, and it must be kept for all who fully abide by it. And I am hopeful that all countries in the region can share in this goal.

By conceding that Iran has a right to develop nuclear power, Obama conceded that the regime our own State Department has called the world’s Number One supporter of terror has a “right” to go nuclear.

He further conceded that they are a regime he seeks to have better relations with. He did little to aid the Iranian students in Tehran and around the country who rose up against the murderous mullahs. He claimed it would be “meddling.”

Now, Israel is working against the clock. Can any nation stand by while a regime that has pledged to wipe it out, that has financed and armed terrorist groups like Hizbollah and Hamas, races to get nuclear weapons?

It might be interesting to comment on the personalities of this new administration. And it’s certainly fun to watch two rivals like Hillary and Barack Obama maneuvering for personal advantage in the making and enunciation of U.S. foreign policy.

But this is serious business. The life of Israel is at stake, and perhaps our own. We may soon find that burqas, saaris, and umbrellas are poor substitutes for a policy of peace through strength. Let’s all pray that America awakens to the peril in time.