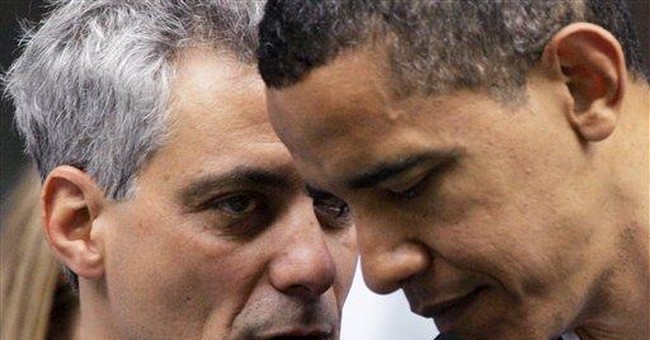 This week it’s been revealed that President Obama’s top White House advisors are launching a long-planned Nixonian attack on Rush Limbaugh intended to hurt the Republican Party. This Chicago-style strategy is the exact opposite of what President Obama promised during the campaign. While he promised to be the next Ronald Reagan, he is instead the next Richard Nixon.

Now Politico reports this strategy was planned months ago. Democrat pollster Stan Greenberg worked with Mr. Emanuel, James Carville and Paul Begala to find a boogey-man. Their polling indicated that Mr. Limbaugh would be a tempting target to alienate moderate voters from the GOP. Then in an effort to undermine their political opposition, they planned to deceitfully portray Mr. Limbaugh as the leader of the GOP.

Mr. Limbaugh is a leading conservative voice, but not the leader of the Republican Party. To portray him as the head of the GOP would be like the Bush White House claiming that George Soros, Daily Kos’s Markos Moulitsas, or Arianna Huffington were head of the Democrat Party.

Mr. Limbaugh is the most successful radio personality on the air today. With 20 million listeners, he has an enormous audience, to which he unapologetically proclaims the virtues of conservative policies and passionately advocates for politicians to base policy on a conservative philosophy.

This is why Democrats want to bring back the Fairness Doctrine. While President Obama says that he does not support it, this is a ruse. Mr. Obama’s closest Senate colleague, Senator Dick Durbin from Illinois, has already introduced a bill that focuses on “localism,” but would be used by the FCC to force radio broadcasters to drop national shows like the Rush Limbaugh Show.

It is not just about Mr. Limbaugh. This government-censorship regime would also silence Glenn Beck, Sean Hannity, Mike Gallagher, Bill Cunningham, Laura Ingraham, Hugh Hewitt, Roger Hedgecock and every other national conservative voice. It is the Fairness Doctrine, repackaged under a new name. Its sole intent is to silence opposing voices. Dissent will not be tolerated in President Obama’s America.

The outrage in this Nixonian strategy is that it is exactly what the president promised to end. That point cannot be overemphasized. Mr. Obama vowed to get past red states and blue states to rebuild the United States. The hypocrisy is stunning.

It is inconceivable President Obama is so clueless and negligent that his top advisors could plan this outrageous campaign without his knowledge. We have seen before. In Chicago, he worked with Jeremiah Wright, convicted felon money-man Tony Rezko and unrepentant terrorist William Ayers. Mr. Obama said he hardly knew them. Now his top White House advisors are executing a hyper-partisan strategy while Mr. Obama talks unity. Perhaps next he will say he hardly knows his chief of staff and campaign manager.

The president gives flowery, Kumbayah speeches about post-partisan politics, changing the way Washington works, and reaching out to Republicans. At the very same time, he’s tasking his bare-knuckled hit-men with secretly finding a private-sector person to falsely label as the leader of the Republican Party, and then use the stature of the White House as a platform to smear that person and the GOP.

This outrageous smear campaign is beneath the dignity of any president. It demeans the White House to orchestrate such a dishonest campaign. And sadly, President Obama has destroyed whatever chance he had of building bridges with the GOP. He has engaged in the worst form of Chicago-style politics. By acting like a cheap political hack, he makes it clear that Republicans have no choice but to vigorously oppose his hyper-partisan, ultra-liberal agenda.

The imperial presidency of Richard Nixon has returned.

As Domestic and Foreign Crises Rage, Biden Called an Early Lid
Townhall
Do these border apprehension numbers from CBP match up with Dem & media claims it's just a 'seasonal' thing?
Twitchy
We Don't Have a President
Redstate
The Morning Briefing: Everything Is Fine—Biden Naps While World Falls Apart
PJ Media