Why I Endorsed Michael Steele 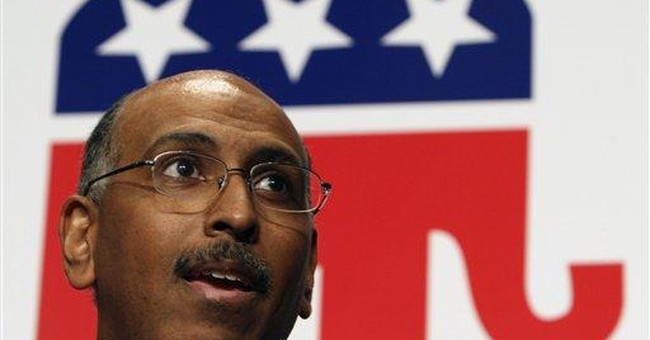 Last week, Michael Steele made history as the first African-American elected chairman of the Republican Party. Although the GOP is currently the minority party in our two-party system, Chairman Steele takes the reins at a moment of tremendous opportunity. Mr. Steele’s publicly expressed commitment to conservative principles and the platform of the party, led me to urge the GOP leadership to elect him as chairman.

January 29 and 30 were rollercoaster days for all of us running to become the next chairman of the GOP. We appeared before the members of the Republican National Committee, making our case about how to inspire, rebuild and advance our party.

The Republican Party wins when it holds fast to its principles and articulates bold policy positions embodying those principles. The precepts of limited government, economic opportunity and personal responsibility resonate with Americans. The Reagan Coalition of economic conservatives, social conservatives and national-security conservatives wins elections when our candidates communicate a message of core values, personal and family security, self-sufficiency, and the rule of law.

For Republicans to be successful again, the party must both rebuild our base and expand our reach.

The party’s base is dispirited. Economic conservatives are appalled at reckless spending and endless bailouts. Social conservatives are on defense because some advocate the GOP jettisoning issues such as life, marriage or the Second Amendment.

Abandoning those issues, expanding government and reducing personal liberty with higher taxes will not get voters to support Republicans. If Americans seek more government and higher taxes, they will go to the professionals, the Democrats.

The GOP needs a chairman who will build the party, by mobilizing the base around our issues and reaching new voters with those very same values.

The GOP also needs a chairman who can go one-on-one against the new DNC chairman. Virginia Governor Tim Kaine is a lawyer with excellent speaking and debating skills. The RNC needed a chairman who could effectively lock horns with such a formidable opponent on TV and radio. Mr. Steele has the skills and strength of character to do that.

I served as a vice-chairman of the Platform Committee at the 2008 Republican convention in Minnesota. I fought to make sure that the conservative principles the GOP was built upon were strongly and clearly articulated in the platform. The party has never had a platform that more forcefully proclaims those enduring and defining principles as the one adopted in Minneapolis-St. Paul.

Over breakfast on January 30, Mr. Steele and I discussed the 2008 platform. During that conversation he earnestly expressed his full support of the platform. This is a platform that is unabashedly pro-life, strongly grounded in Second Amendment freedoms, and fully embracing limited government and the rule of law.

That conservation and my perception of Mr. Steele’s authentic embrace of those principles provided me with the basis upon which I could endorse him with a clear conscience and firm conviction once I determined it was time for me to exit the race.

The Republican Party has been in decline. Now as the economy contracts and foreign threats gather, there is a push for a radical government expansion where the national government would take over whole sectors of the American economy. At the same time, there is a push to remake our culture and society, even bedrock human institutions and basic individual and family rights.

Against this tide, Republicans must have all hands on deck. In addition to leaders in Congress and among the governors, the GOP needed a chairman who could make the case for Republican principles to the voters.

Americans voted for change. But they did not vote for a socialistic economy, weakened defenses or a never-before-seen social order. The Republican Party must draw a clear contrast for economic freedom, foreign policy predicated on strength, relentless war against international terrorism, and unwavering defense of the American family.

Principle must trump politics. I would rather endorse no one than endorse someone I feared might abandon the GOP’s values and priorities.

I supported Mr. Steele because, by energetically advocating the principles and policies in the GOP platform, he can reunite and grow the GOP once again. Republicans face daunting challenges, but by being true to our principles Republicans can be the real agents of change.