A Scout is Reverent 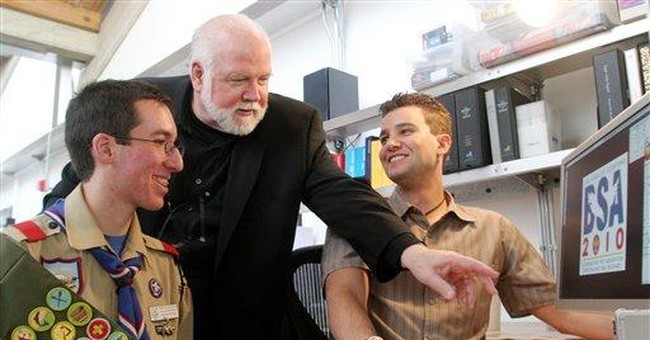 “Of all the dispositions and habits, which lead to political prosperity, Religion and Morality are indispensable supports.”
— George Washington, Farewell Address, 1796

The presidential candidates need to speak out while the spotlight is on Pennsylvania. There is an opportunity for voters in Pennsylvania and across America to know where the candidates stand on an important constitutional issue.

The City Council of Philadelphia is attacking the Boy Scouts of America, seeking to drive them out of a historic location because the Scouts teach traditional moral values, consistent with the Scout Oath and Scout Law. City Council’s action violates the First Amendment, and the Scouts should fight this in federal court.

The Boy Scouts of America has been shaping the character of young American boys since it was founded in 1910. The Scouts challenge and encourage boys and young men how to be honorable and productive members of society. They achieve this through teaching, adult mentoring, and behavioral example, among other things.

In 1928, Philadelphia recognized the social value of the Scouts by agreeing to a perpetual lease whereby the Scouts could have a headquarters facility for $1 a year. But just last year the City Council voted 16-1 to violate their contractual obligation by breaking the lease. As of next month, the Boy Scouts’ rent for that facility would be a whopping $200,000 per year.

What prompted the City Council to take such severe action? What was the Scouts’ crime? They have kept teaching the values that they have been teaching for almost a century.

From my early years in Scouting, I remember there are two things a Boy Scout must learn to say from memory before he can advance in rank. The first is the Scout Oath, starting, “On my honor I will do my best to do my duty to God and my country and to obey the Scout Law.” The last line of the Oath includes the scout’s vow to be “morally straight.” And the last tenet in the 12 principles of the Scout Law is that a scout is reverent.

Ever since 1910, Scouting has taught that part of being a committed Scout is a traditional understanding of sexuality. Though Scouting respects adherents of various faiths, it has always had a Bible-based morality as the foundation of its values.

The Boy Scouts of America believes expressed homosexuality is inconsistent with its credo. They believe their “duty to God” and promise to be “reverent” requires fidelity to that traditional faith. As a result, the Scouts do not allow openly homosexual individuals in their adult leadership ranks.

But the Philadelphia City Council has bought into a radical homosexual agenda lock, stock, and barrel. Not only does the Council provide full recognition of special homosexual rights, they also will obviously attack any organization that does not adopt its newfound agenda. The Council is utterly intolerant of any person or organization that does not embrace its new “tolerance,” and is seeking to drive the Scouts from the city.

One consequence of democracy is if elected leaders, in a city, state, or nation, choose to embody a radical agenda and attack traditional values, they can usually get away with it. There is nothing to stop government from enacting wrong policy.

But there is one problem with what the Philadelphia City Council is doing: it is not only wrong, it is illegal. In fact, it is unconstitutional. The First Amendment of the Bill of Rights constrains the actions of every city in America. And, targeting the Boy Scouts because of their religious expressions violates three of our country’s most sacred First Amendment guarantees.

First, this violates the Boy Scouts’ free speech. To discriminate against the Scouts because of what they say about homosexuality is called viewpoint discrimination, and the Supreme Court has held that viewpoint discrimination is always unconstitutional. Sometimes national security or other extremely important interests allow government to forbid speaking on certain topics. But if any given subject is permissible, then the government can never force those who take a certain side of the issue to be silenced.

Second, this violates the Establishment Clause. Government cannot target any person or group for punishment because of religious faith. The Scouts base their moral teaching on a traditional understanding of the Bible. To take action against them because of that faith goes to the core of what religious liberty is meant to forbid.

So the Boy Scouts’ rent in Philadelphia is about to skyrocket, seeking to drive them out. The Scouts must fight. They must now look to the federal courts to vindicate those rights, sending the message that liberal politicians who push a radical agenda will hit a brick wall when their actions violate the Supreme Law of the Land.