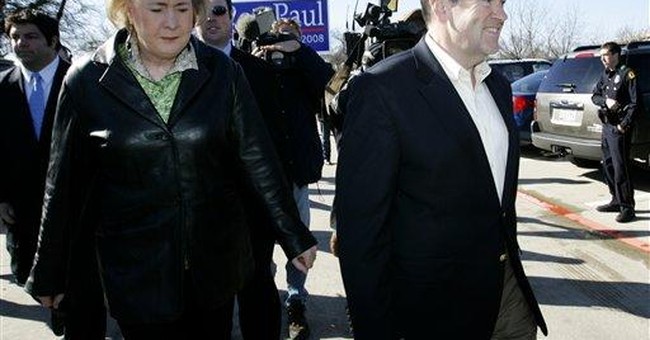 Now that John McCain has secured the Republican Party nomination, he will decide who should be the next chairman of the Republican National Committee. One name he should consider is Governor Mike Huckabee.

Some people are talking up the idea of Mr. Huckabee being Mr. McCain’s running mate. Should that not happen, the RNC chairmanship would be a perfect post for the young, energetic and charismatic governor from Arkansas.

About 30% of the GOP base is evangelical. Part of Mr. McCain’s crossover appeal is that he is not one, nor does he pretend to be. But having one as GOP chairman would energize them all the way to November, which is what Senator McCain needs.

Mr. Huckabee has proven himself a GOP asset. He was elected multiple times as governor in a Democrat-dominated state. Most Arkansas voters are Democrat, both U.S. senators are Democrats, his predecessor and successor were Democrats, and he had a Democrat legislature.

Yet despite that, he kept getting reelected. He even received 40% of the African-American vote, which is an extraordinary for a Republican.

Mr. Huckabee understands how to appeal to Reagan Democrats. As seen during the campaign, he knows how to connect with working families and lower-income voters, people with a small-town, common-sense attitude towards family and country, who usually feel that the GOP does not speak to their concerns.

The Republican Party is often portrayed by its opponents as extremeists and the party of “fat cats” and country club members. Having Mr. Huckabee as chairman, focused for on party-building and outreach for four years would be strategically prudent.

Consider how Governor Howard Dean has been as DNC chair, and compare that with Mr. Huckabee.

One of Mr. Dean’s obvious weaknesses is that he wastes money. Setting aside his profligate spending as DNC chair, recall how he blew through more than $40 million in his presidential campaign, only to lose Iowa. Mr. Huckabee, by contrast, had a shoestring budget for his campaign, and was such a good steward of it that he made it last, and then won Iowa.

Another of Mr. Dean’s weaknesses is that he demonizes the opposition. He characterizes Republicans in harsh terms that impugn their character and deny their patriotism. A perfect example was just this week, when he had the audacity to say that Mr. McCain lacked integrity. He’ll have a difficult time convincing the American people of that. If John McCain is anything, he is a man of honor. By contrast, Mr. Huckabee has always praised what is good about his opposition, and lauded their good intentions.

A third weakness of Mr. Dean is that he has no crossover appeal. He is a stridently- partisan liberal Democrat from a far-left state. Mr. Huckabee is the epitome of a social conservative and evangelical Christian, but has such a long record of framing issues in terms that appeal to the many conservative Democrats.

A fourth weakness of Mr. Dean is his wide-eyed, hard-edged demeanor. Instances like the Dean-scream of 2004 leave one saying, “Try the decaf.” Mr. Huckabee, by contrast, has a laid-back demeanor and good humor that you see in his Chuck Norris commercials, John Stewart interviews, and segments with opposition hosts like Chris Matthews that makes people laugh.

Yet despite all these weaknesses, Mr. Dean is in some regards making a successful DNC chairman. A big part of that success is due to his leadership experience as a governor, his energy and his ability to give a partisan speech.

If Governor Dean can be a fairly effective DNC chairman, then Governor Huckabee could make a very effective RNC chair. Mr. Huckabee has all of Mr. Dean’s strengths, and is also strong where Mr. Dean is not.

A key concern here is that Mr. McCain will need someone who can rally, mobilize and secure both social conservatives and working families. Mr. McCain’s priorities and strengths address the big issues of national security, cutting spending, entitlement reform, and other matters that will win swing voters. That is where the senator needs to be spending his time, and it’s where he’s strongest. A Chairman Huckabee would be able to build the party where Mr. McCain needs the party built, freeing up the nominee to reach the voters he has proven his ability to win.

There will be talk about someone who can raise money. The money-raising apparatus is there. It will work fine, and a strong finance chair at the RNC can guarantee that. The bigger concern from a party standpoint is that the people in the party who have had issues with Mr. McCain are going to need to be reassured and enthused. For that, Mr. McCain needs an established social conservative who has charisma, name recognition, an ability to give a good speech that wows conservatives, while not making any mistakes that turns off moderates.

Governor Huckabee fits that description perfectly. He could be a real asset as RNC chairman.