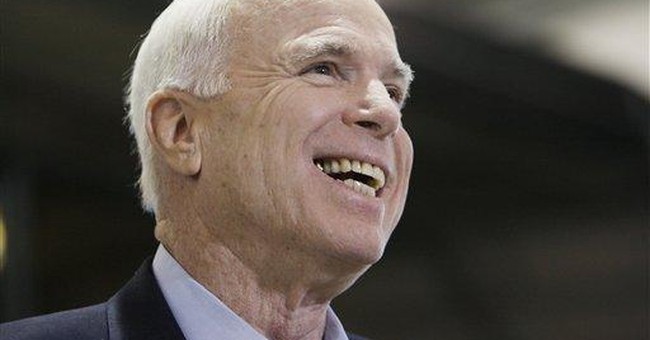 Today is the most important day for Senator McCain. People don’t care how much you know until they know how much you care. That maxim must guide Senator McCain’s speech at the Conservative Political Action Conference today. If it does, he could win the presidency.

CPAC is the largest annual gathering of conservatives in America, with thousands attending from across the nation. Put on by the American Conservative Union and sponsored by organizations such as the National Rifle Association, Americans for Tax Reform, and Townhall.com, every element of the Republican base is represented.

Mr. McCain is going into as skeptical of a crowd as possible. All the elements of the conservative Republican base the senator has had issues with at one point or another will be represented in force. These are the people Mr. McCain needs to win over if he is to have any hope of truly mobilizing the Republican Party behind him. He needs to reach out to them.

It’s a superficial analysis to say that conservative angst with Mr. McCain is due to policy disagreements. It’s not; policy disagreements happen every day. What conservatives need to see is that Mr. McCain cares about the principles from which those policies are derived. And, they need to see that he cares about them, welcoming them to the table and taking up their concerns.

There are deal-breaker issues for conservatives, but they are few and far between. Mr. McCain will not lose the Republican base by talking about global warming or re-importing drugs from Canada. And he cannot secure the base by talking about free trade and school choice. While each of those is an issue to be sure, they will neither win nor lose the race for him.

But deal-breakers are just that, deal-breakers. If a candidate is not right on a deal-breaker, then there is nothing he can say to get that person’s vote.

Mr. McCain has basically been there on the social issues and many of the economic issues, though he’s never come across as enthusiastic about them.

So what Mr. McCain needs to do is simple. He needs to stick to four basic themes. If he manages to convince GOP voters he means what he says, he could unify the Republican Party.

For Mr. McCain, the four themes he needs to beat constantly to unite and energize the GOP are: Cut government. Secure our borders. Win the war. Redeem our culture.

The key for each of those themes is not the policy. Each is rather a policy goal that reflects a principle at the heart of the Republican philosophy. Embracing those principles will win over a critical mass of conservative Republican base voters.

Cut government. Conservatives want lower taxes, less regulation, and a president who will balance the budget by cutting spending. Ronald Reagan said, “Government is not the solution to our problems. Government is the problem.” Limited government and economic opportunity are core conservative principles.

Secure our borders. Ronald Reagan again said, “A nation that cannot secure its borders is not a nation.” Conservatives want the crime and social costs from health care and education resource drains from illegal immigrants to end. The principle here is the rule of law. Millions broke the law getting here and continue to break it every day, sapping resources. Conservatives will not consider how to deal with those already here until America’s borders are secure and the rule of American law is upheld.

Win the war. Ronald Reagan’s plan for the Cold War was “We win, they lose.” Americans do not want to lose in Iraq, Afghanistan, or anywhere else against terrorists. Conservatives want a strong and seasoned commander-in-chief who can lead us to victory. The principle here is a foreign policy predicated on strength, knowing when and how to use force to protect America’s safety and interests in a dangerous world.

Redeem our culture. Whether abortion, marriage, religious liberty, or the Second Amendment, conservatives want America’s moral and social heritage protected and preserved. That can only be done through the courts. If Mr. McCain wants to win conservatives, there is nothing he could change more right now than to make the Supreme Court a stump speech issue, and talk about the sort of judges he would appoint and fight for relentlessly.

Mr. McCain needs to embrace his own party. He must tell conservatives that he cares about their concerns and that he will fight for these principles. If Mr. McCain does, he may find that there is another value conservatives hold dear: Redemption. If he does not, millions will stay home, even if the Democratic nominee is Hillary Clinton. Disdain for Mrs. Clinton can carry the GOP base only so far.

CPAC could not come at a better time for John McCain. He needs to make the most of it.