Remembering the 10 Unborn Babies Killed on 9/11

Katie Yoder
|
Posted: Sep 11, 2021 12:01 AM
Share   Tweet
The opinions expressed by columnists are their own and do not necessarily represent the views of Townhall.com. 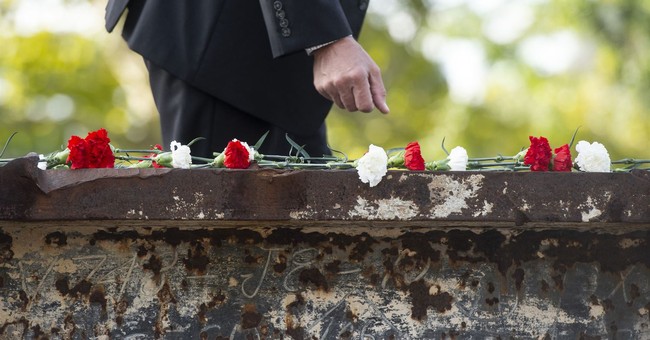 Nearly 3,000 names appear etched into the 9/11 Memorial in New York City. But 10 of those names – names of women who died on September 11, 2001 – stand out because they share something in common: Each woman is remembered along with “her unborn child.”

Here’s what we know of the 10 unborn babies who would be turning 20 years old if they had not died in the September 11 terrorist attacks:

The 9/11 Memorial & Museum remembers 25-year-old Patricia as a lifelong resident of Queens who lived with her husband, Louis.

“Patricia took night classes while working full time in the accounting department at Marsh & McLennan on the North Tower’s 98th floor,” the site reads. “On the morning of September 11, before she went to work, Patricia learned she was pregnant. She was on the phone with Louis moments before the North Tower was struck.”

During that phone call, Louis heard his wife exclaim, “Oh my God,” before the connection was lost, the New York Times reported in 2002.

“She had seen something, she felt something,” he recalled. “I kept saying, ‘Not now, not my wife, not just when we heard this news about the baby.’”

“Two things were taken from me on that day,” he told Newsday in 2011. “I was looking forward to being a father.”

The 32 year old from Staten Island also died in the North Tower, while working for Cantor Fitzgerald. At seven months pregnant, Deanna was looking forward to her maternity leave – and having a baby.

"She was so excited," her husband, Anthony, told the Staten Island Advance in 2001. “The night before we were watching the baby move around.”

The 38 year old died aboard United Airlines Flight 93, which crashed in Pennsylvania after the passengers fought back against the hijackers. Lauren was three months pregnant.

When she realized that her plane was hijacked, she left her husband, Jack, a phone message.

“And she said, you know, Jack, pick up honey, okay, I just want to let you know there is a little problem on the plane,” he told WTAJ on Sept. 8. “I just love you more than anything, know that, please tell my family I love them too, goodbye honey.”

Years later, he still mourns her and their baby.

“We were going to have a child who would be 20 in April,” Jack said. “There was that difficulty in losing that child, which I would find later on, over the last 20 years was harder than expected.”

He started writing a book dedicated to his child.

“I began the forward with, ‘Dear son...or daughter... I'm writing this to you on the advice of my therapist, to let you know a little bit about your mom and dad, and also what has transpired over the last 20 years,’” he told NPR on Sept. 9.

The 34 year old from New York died in the North Tower while working at Cantor Fitzgerald. She was five months pregnant, Grand Rapids Press reported in 2001. According to local media, she was expecting a little girl who, today, is remembered as Patricia.

The 29 year old living in New York died in the South Tower while working at Regus Plc. She was four months pregnant, the Times-Picayune reported in 2001.

“As time went on I was so in love,” her husband, Tim, said. “It felt like we should have a family.”

In 2018, her name was publicly read at the New York City memorial and museum by her brother-in-law, Thomas Langer.

“I witnessed my brother endure the pain that no one human being was ever meant to bear,” He said, NPR reported. “Eventually Timmy Langer drank himself to death.”

6. Renée A. May and her unborn child

The 39 year old from Maryland died as part of the flight crew for American Airlines Flight 77, which crashed into the Pentagon. She was looking forward to having a baby and getting married.

The 26 year old from Queens was seven months pregnant when she died in the North Tower while working at Carr Futures, Inc. Her husband, John, also died while working for the same company.

She was just a week away from taking maternity leave, the New York Post reported in 2004. The baby would have been named Dylan, if a boy, or Julia, if a girl.

“This was a person,” John’s mother, Christina Resta, said. “We lost three people on that day.”

Sylvia’s mother, Maria SanPio, added, “Every time I go to any store, see other babies, it’s just so hard . . . I volunteer at a hospital, but I can’t help with the youngest babies. I can’t.”

8. Rahma Salie and her unborn child

The 28 year old from Boston died as a passenger on 9/11 aboard American Airlines Flight 11, which crashed into Tower One of the World Trade Center. Her husband was on the same flight. She was seven months pregnant.

The 34 year old of New Hyde Park, New York, was expecting her first child in January 2002. Jennifer died on 9/11 in the South Tower, while working for Aon Corp.

32-year-old Dianne died five days before her wedding, and six months before she expected to give birth to her first child, Newsday reported in 2011. A resident of Queens, she was working in the North Tower for Fred Alger Management, Inc. on 9/11.

“I'm so happy the baby is mentioned [at the memorial],” Signer's mother, Patricia, told Newsday. “Because that baby will always be in my heart.”

In other words, every life is beautiful, precious – and worth remembering.