Katie Yoder
|
Posted: May 01, 2021 10:00 AM
Share   Tweet
The opinions expressed by columnists are their own and do not necessarily represent the views of Townhall.com. 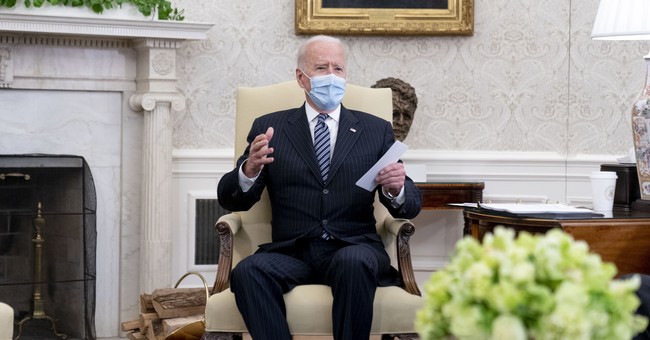 While he considers himself personally pro-life, the second U.S. president to identify as Catholic publicly supports abortion – something that the Church considers a grave evil. That’s why pro-life and Catholic figures recently challenged the Washington Post after it called President Biden “very Catholic.”

On April 28, the Post published a story by religion reporter Michelle Boorstein with the headline, “Biden’s abortion rights stance triggers coming debate among Catholic bishops on Communion.” The Post’s tweet sharing Boorstein’s story ended up capturing more attention than the story itself for describing Biden as “a very Catholic president who supports abortion rights.” That’s because the Catholic Church’s teaching on abortion is clear, as explained in its catechism.

“A rising group of right-wing U.S. Catholic bishops is colliding with a very Catholic president who supports abortion rights,” the Washington Post tweeted on April 28.

Ryan T. Anderson, the president of the Ethics & Public Policy Center, suggested rearranging the tweet’s text to, “Or: A group of very Catholic US Bishops is colliding with a left-wing president who supports the legality of killing innocent children.”

Lila Rose, the president of pro-life group Live Action, called out the Post on Twitter: “‘Very Catholic who supports abortion rights’ is impossible, like saying ‘a devout Muslim who loves pork.’”

“It would be an insult to Muslims & this headline is an insult to Catholics,” she added. “You can't support killing Christ’s little ones & claim His name.”

In another tweet, she continued, “Also, to call Bishops ‘right-wing’ because they reject abortion is also ignorant and nonsensical. All Bishops must be anti-abortion, unless they are blatant heretics.”

In other words, “It doesn't make them ‘right-wing,’ it makes them Catholic.”

“Catholicism is not just defined by self-identity but also practice, & orthodoxy (from the Trinity to morality),” Fr. Matthew P. Schneider tweeted. “Someone is Catholic by baptism but to call someone very Catholic or similar, I think you'd need both practice & orthodoxy.”

For decades, Biden voted repeatedly against abortion. But he noticeably flipped on the issue as he prepared for the 2020 election and ran on the Democratic Party platform that calls for “safe and legal abortion.” His switch on abortion became most obvious when he condemned the Hyde Amendment in 2019 – the day after he reaffirmed his support for it. First introduced in 1976, the Hyde Amendment bans generally federal funding – taxpayer dollars – from going toward abortion.

The Church is steadfast in its position on abortion. The Catechism of the Catholic Church, which summarizes official Church teaching, recognizes the inherent dignity and worth of the unborn.

“Human life must be respected and protected absolutely from the moment of conception,” the catechism reads. “From the first moment of his existence, a human being must be recognized as having the rights of a person – among which is the inviolable right of every innocent being to life.”

“Since the first century the Church has affirmed the moral evil of every procured abortion,” the catechism reads. “This teaching has not changed and remains unchangeable.”

The Church takes abortion, a “crime against human life,” so seriously that obtaining an abortion – and helping someone else obtain an abortion – are grounds for automatic excommunication.

“Direct abortion, that is to say, abortion willed either as an end or a means, is gravely contrary to the moral law,” the catechism reads, and “Formal cooperation in an abortion constitutes a grave offense.”

That said, the Church also stresses the importance of forgiveness and mercy for those who have obtained abortions.

“The Church does not thereby intend to restrict the scope of mercy,” the catechism reads, but instead “makes clear the gravity of the crime committed, the irreparable harm done to the innocent who is put to death, as well as to the parents and the whole of society.”

“I repeat once more that a law which violates an innocent person's natural right to life is unjust and, as such, is not valid as a law,” he wrote. “For this reason I urgently appeal once more to all political leaders not to pass laws which, by disregarding the dignity of the person, undermine the very fabric of society.”

The “Church encourages political leaders, starting with those who are Christians, not to give in, but to make those choices which, taking into account what is realistically attainable, will lead to the re- establishment of a just order in the defence and promotion of the value of life,” he added.

A doctrinal note on “The Participation of Catholics in Political Life” by The Congregation for the Doctrine of the Faith explained the pontiff’s stance.

“John Paul II, continuing the constant teaching of the Church, has reiterated many times that those who are directly involved in lawmaking bodies have a grave and clear obligation to oppose any law that attacks human life,” it read. “For them, as for every Catholic, it is impossible to promote such laws or to vote for them.”

Going straight to the source, the Catholic Church’s teaching is clear.