Katie Yoder
|
Posted: Jun 01, 2020 12:01 AM
Share   Tweet
The opinions expressed by columnists are their own and do not necessarily represent the views of Townhall.com. 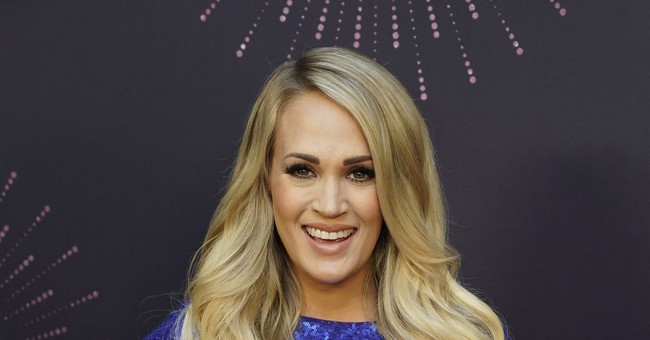 Many in the media are racing to report the story of a Christian singer who has lost his faith. But there’s another, less told story also going around: That of a country singer loving God in the midst of suffering.

American Idol star and Grammy-award winning singer Carrie Underwood is appearing in a new video series called “Mike and Carrie: God & Country” with her husband, former professional hockey player Mike Fisher. Released by the Christian nonprofit I Am Second, the four-episode show promises to give “insight as to how they, with two distinct personalities and careers, stay grounded in the midst of the many peaks and valleys of their lives.” The first episode, “I Cry Easy,” was released May 27. In it, Carrie and Mike shared their faith and personal life stories.

The show began with the husband and wife sitting casually in front of the camera and bantering with one another. They were an unlikely pair, they stressed. While Mike is a hunter, Carrie is an animal lover. He prefers sushi while she wants “not sushi.”

They also differed on the bigger issues: Mike has always been family oriented, while Carrie is more independent-minded and not a “kid person.”

“We just differ, drastically,” Carrie said. But, she stressed, “at the end of the day, we love each other very much.”

That’s because of the role of faith in their relationship, Mike said.

“I think it gives us a kind of a center ground where that’s the most important thing in anything and then your differences, if they’re rooted in that – I know your hurt, you know my hurt – there’s always a way," he revealed. "And it’s usually – it always is God working in it.”

The two met through a mutual friend at one of Carrie’s concerts in 2008. Two years later, they were married. While Carrie was hesitant about starting a family, she said that changed after her firstborn, Isaiah, came in 2015.

Mike felt similarly, and recalled having a moment alone with Isaiah shortly after he was born.

“It was just emotional as could be,” he said. “Just thinking about now I have a responsibility and being a dad, and always looking forward to that, and just praying for him, and it’s one of the greatest gifts ever.”

Isaiah, he said, brought him closer to God.

“It kind of made me realize how much God loves us and the sacrifice he made,” Mike continued, tearing up. “The greatest thing I want for my son is to realize like every relationship with God.”

At the end of the episode, a teaser showed the two talking about trusting God despite suffering three miscarriages.

“After the second miscarriage, she’s like, ‘I lost the baby,’” Mike said. “I was like, ‘Again?’” he said of his reaction in the series’ trailer.

For her part, Carrie “just had an honest conversation with God.”

“I was hurt. A little angry. And I told Him I needed something,” she said. “We needed to have a baby or not ever.”

Carrie first revealed in 2018 that she had suffered three miscarriages in two years.

“We got pregnant early 2017, and didn’t work out,” she said during a CBS interview, People reported. Her response at that point was, “Okay, God, we know this is, just wasn’t Your timing. And that is all right.”

But then she had another miscarriage that same year – on top of suffering from a fall that translated into a broken wrist and a facial laceration. After she had a third miscarriage in 2018, she began asking, “Okay, like, what’s the deal?”

“I had always been afraid to be angry,” Carrie admitted. “Because we are so blessed. And my son, Isaiah, is the sweetest thing. And he’s the best thing in the world. And I’m like, ‘If we can never have any other kids, that’s okay, because he’s amazing.’ And I have this amazing life. Like, really, what can I complain about? I can’t. I have an incredible husband, incredible friends, an incredible job, an incredible kid. Can I be mad? No.”

That changed when she worried that she might have a fourth miscarriage.

“I got mad,” she said. At one point, while snuggling with Isaiah, she remembered thinking, “Why on Earth do I keep getting pregnant if I can’t have a kid? Like, what is this?”

“And for the first time, I feel like I actually I told God how I felt,” she continued. Two days later, she went to the doctor to confirm her fourth miscarriage, but “they told me everything was great!”

Her answered prayer came in the form of Jacob, a “perfect little bundle of a smiley guy,” she told People last year. In an Instagram post announcing his birth in 2019, she added, “his mom, dad and big brother couldn’t be happier for God to trust them with taking care of this little miracle!”

And miracles, well, they’re stories worth telling too.