Katie Yoder
|
Posted: Sep 26, 2019 1:28 PM
Share   Tweet
The opinions expressed by columnists are their own and do not necessarily represent the views of Townhall.com. 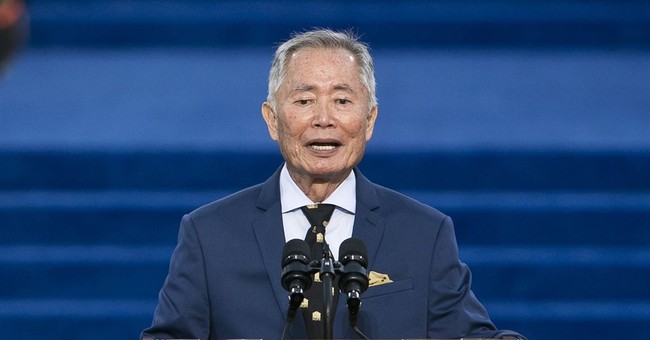 Celebrities from George Takei to Kathy Griffin are celebrating the impeachment inquiry of President Trump. But for them, the campaign to remove the president is nothing new.

On September 24, House Speaker Nancy Pelosi (D-CA) announced that the House of Representatives “is moving forward with an impeachment inquiry.” Her declaration followed the revelation of a July phone call where President Trump asked Ukrainian president Volodymyr Zelensky to “look into” Joe Biden’s son, Hunter.

According to celebrities, there was no need for an “inquiry.” The president was guilty.

“Trump keeps saying there was no ‘quid pro quo’ in the call,” he said in one. “But asking ANY foreign government to assist in an ‘investigation’ of your chief political rival is a clear abuse of office, especially after withholding aid.”

“Impeach the scoundrel,” he concluded. In another tweet, he added, “Trump sounds like a thug who might send guys to break your legs if you aren’t very, very nice to him back.”

Actress Padma Lakshmi, who was also once on Star Trek,  exclaimed, “Finally!!!”

Comedian Kathy Griffin, who once attempted to mock Trump by holding his (fake) bloody, incarcerated head, tweeted a GIF of her dancing along with the words “#ImpeachTrump.”

Singer Lizzo tweeted out, “Im [peach emoji] ment.” And, from the night before, BuzzFeed News host Sylvia Obell shared a video clip of Lizzo at a concert last night.

Bending over with her backside facing the crowd, Lizzo appeared to use her butt to symbolize a peach. To the delight of the audience, she pointed to her left, saying “im,” then to her butt, saying “peach,” then to her right, saying “ment.”

Other tweets were more vulgar – in language, at least.

Likewise, TV writer David Slack added, “#Impeach this corrupt failure and throw his ass out” while actor John Roberts (Bob’s Burgers) continued, “Let’s impeach this piece of s*** and shame him and his sh***y family in history books.”

For her part, Chelsea Handler responded, “It’s a truly beautiful thing that #ImpeachTrump and #NationalVoterRegistrationDay are both happening on the same day.”

That’s because, according to comedian Lizz Winstead, “Trump was born with a silver goon in his mouth.” At the same time, Samantha Bee predicted of the president, “He’s going to have an absolute conniption!”

“Thank you, Nancy Pelosi,” she said in an accompanying video clip. “I never thought this day would come.”

Already assuming the removal of President Trump, actress Elizabeth Banks remarked, “I can’t believe Mike Pence is gonna be President.” Likewise, director Ava DuVernay tweeted, “We are dressed and ready for the #ImpeachmentParty.”

All in the Family actor Rob Reiner chimed in too.

“Virtually every elected member of the GOP knows this President has committed numerous Impeachable offenses,” he typed. “The time has come. They will either honor their oaths to our Constitution or be relegated to the dust bin of History.”

At first, actress and model Chrissy Teigen responded, “I don't get it just call me when it's over.” She added later, “It’s actually simpler than most of the s*** he’s done. Love it! Happy great day to the haters and losers!! Not sad!!”

This is something many figures in Hollywood have long been pushing for: impeachment. As NewsBusters has documented, celebrities went wild for #ImpeachTrump Day back in June. Throughout the year, they have been calling for his impeachment – and even for him to be assaulted and tortured.

Nancy Pelosi’s announcement might be making news. But for many of the celebrities, their reaction is nothing new.