Katie Yoder
|
Posted: Sep 02, 2019 12:01 AM
Share   Tweet
The opinions expressed by columnists are their own and do not necessarily represent the views of Townhall.com. 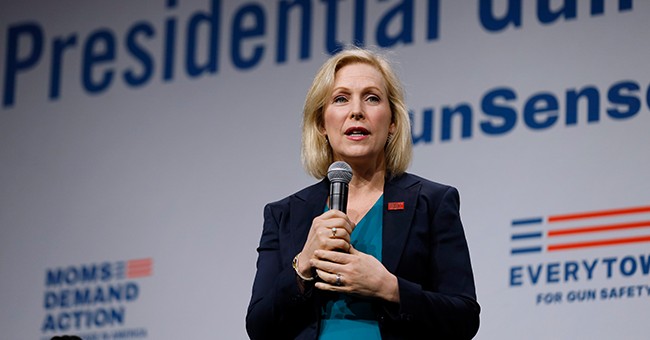 Kirsten Gillibrand was applauded by many in the media as the Democratic presidential candidate focused on “women’s rights,” or, more specifically, abortion. But, in the end, that wasn’t enough to win Democratic voters – never mind general-election voters.

On August 28, New York Senator Kirsten Gillibrand ended her presidential bid after failing to qualify for the next Democratic presidential candidate debate, scheduled for September 12.

“I wanted you to hear from me first, that after more than eight incredible months, I am ending my presidential campaign,” she announced to her supporters in a video posted on social media.

While the other Democratic candidates pinpointed abortion as a major 2020 issue, Gillibrand made it her campaign’s foundation.

The senator “entered the race pitching herself as the voice of feminism and the defender of families and women’s equality,” New York Times’ political reporter Shane Goldmacher recognized on August 29. That’s because Gillibrand “championed a new ‘Family Bill of Rights,’ pioneered a new litmus test to select only judges who supported Roe v. Wade and traveled to Republican-controlled states to protest new restrictions on abortion.”

And yet, Goldmacher added, “of the six female candidates, she was the first to call it quits.”

On Gillibrand’s campaign website, her first priority listed is “fighting for women and families.” And the first way she planned to do that was by stressing, “We need to protect women’s rights and access to the health care they need.” In other words, abortion.

According to her site, Gillibrand argued that “Reproductive rights are civil rights” while expressing support for Roe v. Wade, the 1973 Supreme Court decision that legalized abortion nationwide.

“Kirsten has pledged to only nominate judges who will commit to upholding Roe, and she was the first candidate to put out a comprehensive reproductive rights agenda,” the site continued.

If elected president, Gillibrand promised not only to “codify Roe into law,” but also to end the Hyde Amendment, which generally bars federal funding for abortion. She also vowed to “protect Title X funding and Planned Parenthood.” This was a new fight: the nation’s largest abortion provider refused millions in Title X federal family-planning funding in August after new regulations prohibited the funding from going toward organizations connected to abortion.

Last, but not least, her site reads, Gillibrand would “guarantee access to reproductive health care?—?including abortion?—nationwide.”

In her fight, Gillibrand saw the pro-life movement as the enemy. In early June, she made headlines after going so far as to liken abortion opposition to racism.

At the same time, Gillibrand assumed all women were with her, at least in her language. Later that month, she won applause from many in the media after her performance in the first round of debates where she made lengthy comments about abortion – comments “to America's women and to the men who love them.”

“Women's reproductive rights are under assault by President Trump and the Republican Party,” she began on June 27, before criticizing states for trying to overturn Roe v. Wade.

Gillibrand also identified herself as the “fiercest advocate for women's reproductive freedom for over a decade,” even though, she later admitted, other women were energized. In other words, all American women “are on fire.”

“Our rights are under attack like never before by President Trump and the Republicans who want to repeal Roe v. Wade, which is why I went to the front lines in Georgia,” she continued.

And that she had.

In May, Gillibrand visited Georgia to protest the state’s new abortion restrictions, and repeated her promise to nominate Supreme Court justices who backed Roe v. Wade. For her efforts, media recognized her as the “first 2020 White House hopeful to say she’d nominate only Supreme Court justices who consider the Roe v. Wade decision legalizing abortion settled law.” Three months later, on August 18, she traveled to St. Louis to criticize to Missouri’s new abortion ban too.

She also proved herself an ally to Planned Parenthood.

She had support – just not enough.

The reason “why her candidacy never picked up steam was always a little bit of a mystery,” according to FiveThirtyEight writer Amelia Thomson-DeVeaux.

Thomson-DeVeaux suggested that Gillibrand “was running against a number of other women who are also strong on issues like abortion rights and equal pay” and “Without another signature issue to help her stand out, she often got lost in the melee of the primary.”

Supporting unrestricted abortion, in other words, isn’t enough for Democratic voters. And it’s certainly not enough for American voters in general, the majority of whom want restrictions on abortion.