U.N. Is Hypocritical to Condemn Israel on Women’s Rights

Katie Yoder
|
Posted: Jul 30, 2019 11:50 AM
Share   Tweet
The opinions expressed by columnists are their own and do not necessarily represent the views of Townhall.com. 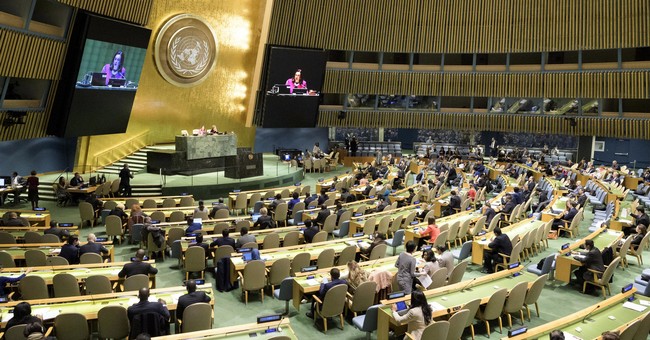 A United Nations council is doing a disservice to women by claiming to fight violations of women’s rights by a single country while overlooking the guilt of its own member nations.

On July 24, the U.N. Economic and Social Council voted for a resolution that condemned Israel – and only Israel – for violating women’s rights, according to UN Watch. Several of those votes came from countries where women are routinely abused or placed under the subordination of men, including Iran, Saudi Arabia, Yemen and Pakistan.

“It amazes me how the U.N. condones votes like these,” Haley tweeted on July 25. “It is a total mockery of human rights to allow Saudi Arabia, Iran, Pakistan, and Yemen to name Israel as the world’s only violator of women’s rights.”

In her message, Haley cited a tweet from Hillel Neuer who serves as the executive director of UN Watch, a self-described human rights NGO. He shared UN Watch’s report on the vote.

“The Jewish state was harshly and repeatedly condemned in a resolution,” the report read, “for allegedly being the ‘major obstacle’ for Palestinian women ‘with regard to their advancement, self-reliance, and integration in the development of their society.’”

Of the items listed on the U.N. council’s 2018-2019 agenda, only one “focuses on condemning a specific country”: Israel. But, as Haley suggested, Saudi Arabia, Iran, Pakistan, and Yemen are guilty of what they accuse Israel of: limiting women’s rights.

Although women can finally drive in Saudi Arabia, Human Rights Watch (HRW) details why the country has a long way to go. Saudi Arabia still upholds a male guardianship system, where a woman needs a man’s permission to travel abroad and marry – and, at times, even to work and access healthcare.

In 2018, the government arrested well-known women’s rights activists. Reports say some of these women have been tortured, with everything from whipping to forcible kissing.

Likewise, in Iran, women can’t travel abroad or obtain a passport without a husband’s permission, HRW states. Husbands can determine where their families live and which occupations their wives pursue. Women are generally forbidden from attending sports games played by men. They have also been imprisoned after challenging Iran’s law requiring hijabs by removing their headscarves.

In Pakistan, most of the five million children missing school are girls, for reasons including “lack of schools, costs associated with studying, child marriage, harmful child labor, and gender discrimination.” More than 20 percent of girls marry before the age of 18.

In Yemen, there is no minimum age for marriage, which requires a male guardian’s permission for the bride, according to HRW. Women activists are threatened and sometimes detained. Violence against women and forced marriage rates, including child marriage, have increased.

“When you have Iran, Saudi Arabia and Yemen among the UN council members accusing Israel of violating women’s rights, you are in the theater of the absurd," UN Watch’s Neuer reacted in a statement.

That’s not even looking at other countries that voted for the resolution, such as China where women face a two-child policy and women from neighboring countries are trafficked, or Sudan which doesn’t recognize marital rape and allows the marriage of girls as young as ten.

UN Watch’s report added that the resolution not only “ignores how Palestinian women’s rights are impacted by their own governing authorities” but also fails to “mention how women are discriminated against within patriarchal Palestinian society.”

In agreement, HRW’s 2019 World Report lists no abuses of women committed by Israel. But, under Palestinian authority, “discrimination against women in personal status laws and gaps in accountability for domestic violence persisted.”

If U.N. councils want to be taken seriously – and want to take women’s rights seriously – they should look at their own members first.