Katie Kieffer
|
Posted: Jun 01, 2021 12:01 AM
Share   Tweet
The opinions expressed by columnists are their own and do not necessarily represent the views of Townhall.com. 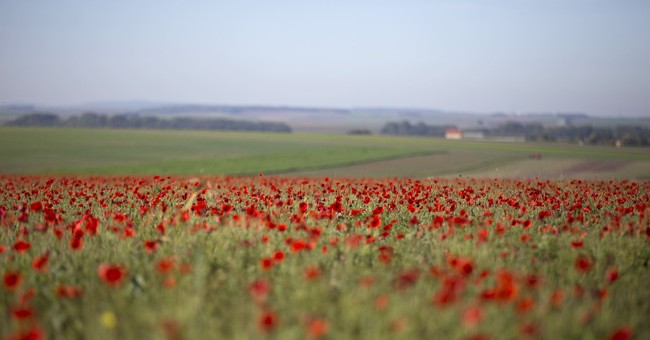 Flanders Fields, Belgium, 1915: Poppies, the hue of human blood, blow in the gentle breeze. The scarlet blooms decorate thousands of Allied soldier graves. Graves of mud transfused with the blood of fallen brothers.

1,043 American soldiers perished in Belgium during World War I, 368 of whom are interred at Flanders Field American Cemetery. Today, Memorial Day, we remember their courage—and the courage of all American veterans—by revisiting the story of the vermilion poppies of Flanders Fields.

Flanders Fields is the name for WWI battlefields on the border of northern Belgium and France. The Battle of Passchendaele and the Second Battle of Ypres are well-known battles that took place on Flanders Fields.

Lethal chlorine gas was deployed by Germans for the first time in history during the surprise April 22, 1915 attack known as the Second Battle of Ypres. Almost instantly, thousands of Allied soldiers died—or went blind. Others faced a slow, wracking death. Allied forces incurred over 87,000 casualties.

A Pen Mightier Than The Scalpel

One soldier who fell in Flanders Fields was the close friend of Lieutenant Colonel John McCrae—a Canadian brigade surgeon serving an Allied artillery unit. McCrae was tasked with performing burial services for his friend.

Touched by the sight of poppies growing on the graves, McCrae penned the poem In Flanders Fields while sitting on an ambulance near the banks of the Ypres canal. A gifted writer, he had previously published a few poems and short stories. London’s Punch magazine published the poem in December of 1915 and it quickly achieved international acclaim.

McCrae’s short but sweet poem—three simple stanzas—was so popular because it rang so true.

He visualizes crimson poppies growing persistently and abundantly between “row on row” of crosses marking the fallen—and calls upon the living to carry “The torch” for “the Dead.”

By 1918, the year of McCrae’s own untimely death from pneumonia, his poem was already world renowned and had successfully memorialized the sacrifices of WWI in a way that will never be forgotten. Indeed, McCrae’s poet’s pen endures as a more powerful tool of healing than his surgeon’s scalpel.

Poppies were front-of mind for many wives, parents and sweethearts who received letters from Allied soldiers. Around 1915, scores of letters home from soldiers began mentioning the lovely poppies growing on the battlefields—a respite from the gore of death. Interestingly, poppies—which thrive on nutritious and well-tilled soil—were rare sightings prior to 1915. Then, trench warfare tilled the earth while lime-potent rubble and nitrogen from explosives fertilized poppy seeds.

Technically, poppies are weeds. This fact surprises many people because a poppy’s blooms are breathtakingly beautiful. Indeed, many gardeners purposely plant poppies in flower beds. And homeowners will often leave poppies in place when they poke through the pavement instead of yanking them out like the dreaded dandelion.

Being weeds, poppies will return year after year if the conditions are right. Persistent. Cheerful. Indefatigable. In retrospect, the poppies emerging in profuse volume on Flanders Fields and other wartime battlefields around 1915 could be seen as flowers strewn by Heaven; a sign that, no matter what form of evil destruction man invents, God is still in charge.

An American woman named Moina Michael first encountered the poem In Flanders Fields while paging through Ladies Home Journal in November of 1918. Moved, she made a personal vow to wear a bright red poppy pin for the rest of her life.

Many of Ms. Michael’s friends quickly followed her example by proudly wearing fabric poppy pins in remembrance of the sacrifice of wartime soldiers. As WWI came to a close, Ms. Michael approached the American Legion with her idea of remembering all veterans—and raising money for returning veterans—by making and selling poppy pins.  In late September of 1920, the National American Legion voted to adopt the poppy as its national symbol of remembrance.

Today, you can find a silk poppy to tuck into a lapel or decorate a workspace by visiting your local American Legion or Veterans of Foreign Wars (VFW) post. (My husband and I obtained poppies this weekend from our local VFW in exchange for a free-will donation. I called around, and many posts still have plenty of poppies on-hand and would appreciate the support.)

The VFW "Buddy" Poppy Program is a wonderful initiative that supports veterans and offers them meaningful work. The poppies are handmade by—and a fundraiser to help support—needy and disabled veterans. This short video from the VFW shows American veterans making the poppies by hand—and expressing their fulfillment in partaking in the “Buddy” Poppy program.

Poppies pop. A red silk poppy is a stand-out reminder to all who see it of the sacrifices made by our veterans. However, if you’re unable to pick up a silk poppy from your local VFW or American Legion, consider other meaningful—and public—ways to express your support for veterans:

For over 100 years, poppies have helped us carry on. Persistence during adversity. Beauty, goodness and hope amid pain, evil and loss.

McCrae poignantly gives voice to the dying words of WWI soldiers—now literally pushing up poppies—in the last stanza of In Flanders Fields: “To you from failing hands we throw / The torch; be yours to hold it high.”

The poppies of Flanders Fields were sown in blood. Go, plant your own poppy seeds that preserve the peace for which Allied soldiers fought.

In Flanders fields the poppies blow

Between the crosses, row on row,

That mark our place; and in the sky

Scarce heard amid the guns below.

We are the Dead. Short days ago

Loved and were loved, and now we lie,

Take up our quarrel with the foe:

To you from failing hands we throw

The torch; be yours to hold it high.

If ye break faith with us who die

We shall not sleep, though poppies grow