Katie Kieffer
|
Posted: Mar 21, 2016 12:01 AM
Share   Tweet
The opinions expressed by columnists are their own and do not necessarily represent the views of Townhall.com. 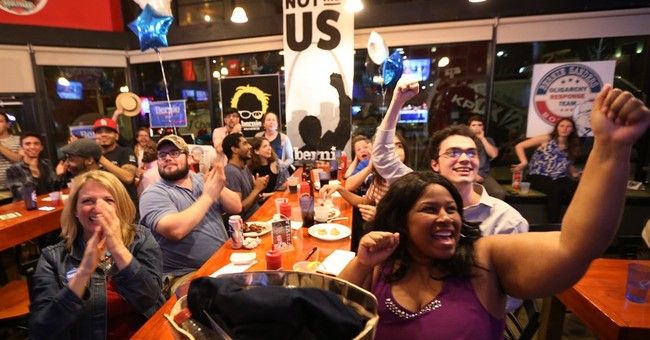 “Affluenza” is the new term for youth who grow unstable due to wealth. “Pauperenza” is my term for Millennials who lose touch with reality due to poverty. Pop star Justin Bieber gets arrested in Miami Beach for getting high and clocking 136 mph while drag racing in a Lamborghini. Bernie Sanders fans pout and shout:  Free College! Universal Debt Forgiveness! $15 Minimum Wage! Rich or poor, the kids are not all right.

A survey by Harris Poll last month found that Millennials fear taxes more than any other generation. 80% of young people ages 18-34 tell pollsters they shudder at the thought of paying and filing taxes. Yet my young peers clamor for programs that will ultimately raise their taxes.

To be fair, Millennials weren’t born this way. For the most part, our parents—the Baby Boomers—went easy on us. 82% of Boomers did household chores as children, but when they became parents only 28% required their children to do chores according to a 2014 Braun Research study. A new study finds that Millennials even refuse to eat cereal because it involves work (pouring cereal and milk into a bowl and then putting a bowl and spoon into a dishwasher).

The good news is, it’s not too late for us to reform. We’ll become happier and more successful while our parents will get a much-needed break.

Millennials are poor in two respects: education and economics. With regard to education, their college professors—whom I fondly refer to as “The Mafia”—massage their malleable minds until they believe that capitalism is dangerous and socialism is a cure-all, while not understanding the meaning of either term. Economically speaking, one-in-four Millennials lives at home with their parents. And this is even down from one-in-three during the middle of Obama’s presidency.

$19 trillion in debt, our country is broke. Plus, the rich will continue to expatriate if taxes soar. Millennials do not realize that the programs they think will level the playing field between themselves and the super-rich will raise their taxes and make the tax-paying process more formidable. Lowering the minimum wage to $0 would actually help Millennials more than raising it to $15, or even $100.

It’s often unpleasant to face reality. A flat tire is an inconvenience, but shouting “Buy me a new car!” at passing drivers gets you nowhere. Yet this is how Millennials attempt to solve their fiscal challenges.

Fox Business Host Neil Cavuto: “They’ve done studies on this Keely …even if you were to take the 1% and take all of their money, tax it 100%, do you know that it couldn’t keep Medicare—just Medicare—going for three years? … it wouldn’t support one entitlement in this country for three years.”

Millennial Keely Mullen: “I don’t believe that! Um, yeah, I’m sorry, I just don’t, that sounds completely ludicrous to me.”

Cavuto: “Do you know how much it will cost to mandate a $15 minimum wage across the country; to have every student loan debt paid off; to pay for public college for everyone?”

Cavuto: “Do you know how much you get fully taxing the 1% [at a rate of] 100%? It’s about a trillion… which would barely keep Medicare going for three years… Even if we repositioned it to go into this area that you want, we don’t have enough to do it, so you’re gonna have to find other means of getting money, right?”

Mullen: “Yeah, no doubt about it. Yeah.”

Cavuto: “Colleges… knowing that student debt is taken care of—it’s forgiven—do you think [they]… aren’t going to leap at the opportunity to gouge [students] even more?”

Mullen: “If we have a big enough mass movement of people in the streets, we can actually prevent things like that from happening.”

Street rule generally doesn’t turn out well. The guillotine was used by French aristocrats to purge commoners as well as by commoners to purge aristocrats—while doing little to solve either party’s grievances.

We must educate our young people so that politicians on both sides are no longer able to manipulate them. On the one hand we have “Republicans” like Paul Ryan who approve $1.2 trillion spending bills—and on the other we have Bernie Sanders and Hillary Clinton promising free college for which they know they can’t pay.

Millennials fear taxes, but the entitlement programs for which they clamor will cause our country to go broke—a fatal taxation on their future hopes and dreams. Share this with young people you know so the truth might heal their Pauperenza.