Why Orthodox Jewish Women are Happy 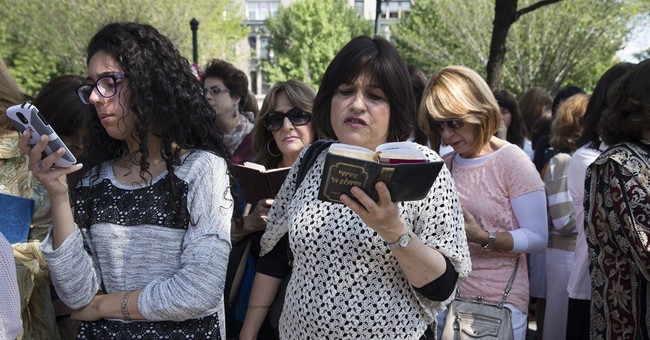 Boumedienne is now the poster girl for young, insecure Western women who abandon Western mores for radical Islam. Boumedienne’s close friend described her to France24 News as an emotional basket case “who often cries and has little confidence in herself.” After discarding her string bikini for a niquab and a crossbow, she became violent instead of loving and merciful. In other words, her radical religious zeal seemed to make her more dark and vengeful than serene and peaceful.

Orthodox Jewish women in France now feel unsafe practicing their faith in public. Jewish women are emigrating from France to Israel in historically high numbers even as scores of young French women are being recruited by ISIS. It is crucial for you and me to ask whether political correctness is misleading women.

Orthodox Jewish women who meticulously follow the Torah abide by “tznius” or modesty laws that direct them to wear stockings, skirts or dresses that fall below the knees as well as blouses that cover their elbows and collarbone. But the Orthodox Jewish woman’s face is always unmasked: her mouth is unrestricted, showing that her religious community values her voice and opinion; she is a unique individual; she is equal to men.

A woman who is free to speak her mind would not feel compelled to cover her mouth with a black cloth. Orthodox Judaism recognizes that allwomen have a natural right to free speech, and therefore does not ask women to hide their mouths.

Extremely religious men who respect women as their equals do not say: “I’m not killing you because you are a woman and we don’t kill women but you have to convert to Islam, read the Qu’ran and wear a veil,” as a shooter told Charlie Hebdo reporter Sigolène Vinson.

Hundreds of teenage girls are fleeing their families in the United States and France to become the wives of jihadist fighters in Syria. Emotionally insecure and underage women are being tantalized with poetic promises of love, acceptance and a chance to fight alongside men. They are being whisked from their homes only to find that they have been duped into accepting a one-way ticket to a life of cooking, cleaning and sewing for violent extremists.

These young women do not realize that they are choosing a life of servitude under the guise of piety. No one has the courage to tell these women that extremely strict Muslims do not have a track record of respecting and uplifting females. Instead, politically correct politicians like French President Francois Hollande mislead women into thinking that radical Islam is just as liberating as Orthodox Judaism.

TIME Magazine’s Paris reporter Vivienne Walt told NPR: “these are not women who have grown up in heavily religious families,” they are “girls who have been radicalized at a fairly young age and rapidly” and they are “married off to fighters” for whom they are expected to keep house. Walt paints a portrait of their lifestyle as more restrictive than liberating: “these very much sound like women from the 1950s.”

Certainly there are many Muslims of integrity such as Lassana Bathily, a store employee at the kosher supermarket in Paris who courageously helped police gain control over the violence on January 9. When Bathily escaped from the supermarket to give the police a key to the store, the officers initially assumed he was Coulibaly. The police pushed Bathily to the ground and handcuffed him before realizing he was there to help.

But we also don’t hear repeated stories of Jewish, Christian or atheist men attacking their wives with acid; stoning alleged adulteresses without due process; or refusing to let women drive.

As individuals, we must reject political correctness in our elected representatives and ourselves. Instead of trying to please everyone, let us strive to live our lives as we see fit while allowing our neighbors to do the same. This means being tolerant of others’ words, actions and faith—as long as they do not use their faith to justify violence, coercion or sexism. Religious freedom, not radical relativism, is the key to happiness.