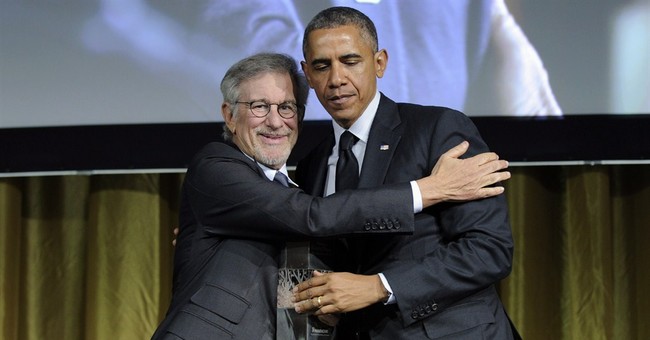 The Tyrannosaurus Rex is one of the most dangerous land carnivores in world history. In the 1993 movie Jurassic Park, a genetically engineered T. Rex viciously attacks the park’s tourists after a duplicitous park employee deactivates the park’s electric fences.

Fast forward to 2014. A clone of T. Rex is prowling America for red meat. This time, “T. Rex” particularly craves the blood of Americans who are entrepreneurs.

Juristic Park is a great metaphor for the state of America under the Obama administration. By trampling on the U.S. Constitution and overloading Americans with laws and regulations, the current administration has effectively unleashed a “T. Rex” that is destroying the pristine democratic republic that our founders created.

The official Universal Pictures trailer for the 1993 movie described Jurassic Park thus: “On this private island… genetics has mastered creation. …Welcome to Jurassic Park.” This eerily echoes President Obama’s vision of America: “If you’ve got a business, you didn’t build that. Somebody else made that happen.”

Genetically modified capitalism is slowly overpowering business creation in America. Crony capitalism and redistributive tax policies have the impact of reincarnating a “T. Rex” that is devouring small business owners. As in Jurassic Park, the tables have turned and it is now humans, particularly entrepreneurs, who are at risk of going extinct.

“Juristic Park” is an America where there is an excess of laws and a deficiency of justice. We have a president who recently visited the Vineyard Golf Club and sent his security detail ahead of him to welcome—I mean ‘frisk’—the club’s regular golfers with intrusive wands while they were in the middle of eating and golfing. We have an administration that sends SWAT teams after American citizens without due cause. We have a Vice President by the name of Joe Biden who promotes pilfering of American taxpayers; a Vice President who is only pro-life when it comes to 57,000 non-American citizen children: "These are not somebody else's kids. These are our kids."

America is “Juristic Park” because we have the highest and therefore least competitive tax rate in the entire world (approximately 40 percent, according to KPMG). Duplicitous politicians in both parties are meanwhile scheming to make it even harder for American job creators.

Last week, the Wall Street Journal reported that Democrats are leading the charge on a proposal to close a so-called loophole in the tax code that allows U.S. companies to avoid egregious taxes through “inversions.” The Journal reports: “The proposal, detailed by Sen. Chuck Schumer (D., N.Y.), would restrict the practice of earnings stripping, where U.S. companies borrow money from overseas parents and deduct the interest expense on U.S. taxes.”

Democrats are foolish to think this proposal won’t backfire. Instead of pondering ways to make it harder for U.S. companies to profit, why not make it easier? Why not make it more attractive for companies to stay in America by reducing the corporate income tax rate to the lowest in the world and by simplifying the tax code? American companies would voluntarily opt out of the administrative and legal expenses of engaging in inversions if our corporate income tax rate were in the single digits.

American companies will not “sit and take it.” They will move abroad or shut their doors. In April, the Kauffman Index of Entrepreneurial Activity reported that the nation’s business creation rate has been steadily dropping for the past two years. In July, the Brookings Institution reported that the number of American companies that are over fifteen years old has been steadily increasing. In other words, American companies are getting older and new entrepreneurs are not able to replace them fast enough because it’s too difficult to run a for-profit company in the United States.

Besides lowering the corporate income tax rate, we need to reform the overall tax code and eliminate Obamacare. I explain in “Let Me Be Clear,” how individual Americans can immediately opt out of the Obamacare exchanges and how we can improve our healthcare system with one of the many free market solutions that I uncovered after interviewing close to 300 medical professionals.

Schumer knows that he has a good chance of winning bipartisan support for his anti-inversion scheme because Republicans like Sen. Chuck Grassley have lambasted inversions as “immoral.” Both parties are hacking away at our country’s foundation. It’s time for the American people—especially the young Millennial voters whose long-term futures are at stake—to mobilize for action at the midterms.

Like the creator of Jurassic Park, President Obama is effectively replacing “creation” (in the sense of business creation) with “genetics” (or socialism). So, educate your friends and get out and vote in the midterms. Don’t become T. Rex’s next snack.