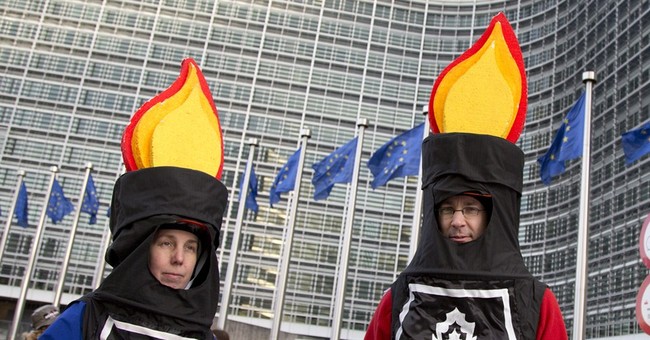 There’s hope for the future. My generation of Millennials is embracing entrepreneurial oil jobs to keep America’s lights on.

On June 2, the Obama administration proposed new carbon regulations calling for a 30 percent reduction in carbon emissions by 2030. Why 2030? Who knows! It’s an arbitrary date, not a number based on sound science.

Coal currently supplies 39 percent of America’s electricity. TIME Magazine reports that Obama’s proposal will promote “fuel switching” from coal to so-called clean forms of energy such as solar. Fuel switching is the politically correct term for putting Americans out of work and the power grid in jeopardy. There are consequences to this knee-jerk switch to government-subsidized “green” energy.

Millennials understand these consequences. Which is why a Pew report issued this spring found that Millennials are “somewhat less likely than older adults to describe themselves as environmentalists—just 32% say this describes them very well…” Millennials care about the environment. But, since science tells us that humans are not responsible for detrimental warming and over 15% of us are unemployed—our priority is jobs.

Our parents are Baby Boomers. Call us the Shale Boomers.

20-something and 30-something Millennials are jumping into the oil industry. Bloomberg Businessweek reports that “After years of failing to attract and retain young talent, the industry is suddenly brimming with upstart millennials....” and that “oil and gas veterans call it ‘the great crew change.’”

Young whippersnappers are taking advantage of the shale boom to start their own businesses, and are doing well. Bloomberg reports that there has been a 60 percent increase in the Young Professionals in Energy’s Dallas chapter since 2009. That means there are now 4,000 young professionals in the Dallas chapter—and many are staking out careers in oil.

Millennials embrace oil and fracking because we understand that wind and solar is not necessarily “environmentally friendly.” That is, unless you call the birds killed by windmills and the desert land consumed with thousands of reflecting mirrors earth-friendly. Solar panels are also dependent on rare earths, which are dominantly mined by the world’s Polluter-in-Chief, China.

Second, we understand that the technology is not there yet. Both wind and solar provide intermittent energy and cannot replace the steady, reliable energy that we get from coal and natural gas. Tech-dependent Millennials are not very interested in living through a blackout.

Where are all those jobs—especially the permanent green jobs that President Obama promised us? I’ve looked high. I’ve looked low. I’ve seen the Treasury Inspector General’s report indicating that the federal government handed out bonuses to IRS employees who did not pay their taxes. But my young friends are still living with their parents. And our parents are just as frustrated as we are! After all, they thought they could enjoy retirement instead of delaying retirement while Lois Lerner enjoys her paid vacation.

Experts estimate that Obama’s carbon regulations proposal will cull 250,000 jobs as 165 coal-fired plants have either shuttered or are set to shutter.

“Here’s a dirty little secret: people are tired of [President Obama’s] speeches. People want jobs,” Rush Limbaugh said on his talk show on November 11, 2009. Rush made that statement seven days after Obama was elected for the first time. If we were tired then, we’re exhausted now. “Dead exhausted,” as Hillary Clinton might moan.

There is hope and solutions, as I explain in my new book, “Let Me Be Clear,” that Random House is publishing on June 24. There are ways to create jobs, become entrepreneurs and take back our American Dreams. But, we must strike while the iron is hot and implement these solutions now—before the midterms and 2016 presidential elections.

Otherwise, we’ll add four more years of Hillary to a country that, at $17.5 trillion in the hole, is already “dead broke.” Let’s take action.