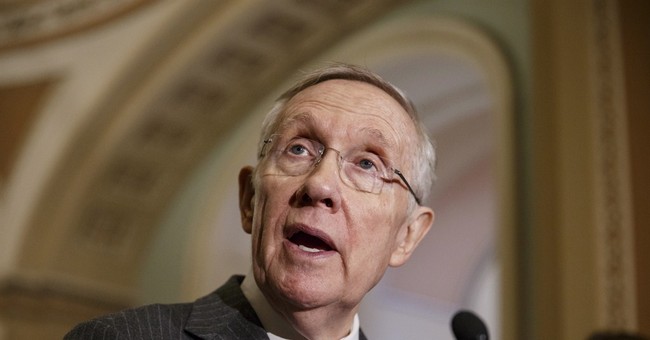 Who is the real Harry Reid? From his behavior, it appears that Harry Reid is a shell of a man—containing clones of Bill Clinton’s mind and soul.

As I watched U.S. Senate Majority Leader Harry Reid give a speech on the Senate floor last Wednesday and claim: “…there’s plenty of horror stories [about Obamacare] being told; all of ‘em are all untrue. But they’re being told all over America,” I had a flashback to former president Clinton testifying: “I did not have sexual relations with that woman, Miss Lewinsky.”

As it turns out, Harry and Billie have quite a few things in common—and the biggest commonality is their penchant for perfidy. Let’s face it: Like Billie, Harry has a track record of exaggerating. He has called Americans who defend freedom and constitutional principles “modern anarchists.”

Harry has yet to explain what the incentive would be for scores of Americans to concoct horror stories about Obamacare. Americans have plenty of options for wasting time (think Candy Crush) that are more tantalizing than spreading whoppers about Obamacare. To do something that boring, you’d have to be paid. Yet, to date, there are no confirmed stories of billionaires paying random people “all over America” to fabricate Obamacare chillers.

CNN Money recently reported that the folks who run Gators Dockside restaurants in Florida are actually losing money as they report an Obamacare horror story. Gators Dockside is a family friendly restaurant that serves up tasty wings, ribs and cheeseburgers. Once the Obamacare employer mandate kicks in, Gators will need to provide healthcare coverage to all full-time workers or pay a fine—meaning up to $500,000 a year in additional operating costs.

So, Gators made the tough decision to tell customers that it will be adding a “1% Affordable Care Act” surcharge to all food and beverage purchases. This surcharge will only cover 32 percent of its anticipated costs to comply with Obamacare. Gators management hopes this small surcharge will allow them to stay in business without cutting full-time workers down to part-time. Sounds like a legitimate horror story to me!

On the Senate floor, Harry Reid mentioned one woman who appeared in an ad funded by an organization that was founded with help from the Koch brothers. And even she was not paid to make up her story, which is probably why Reid was quick to tweet: “I can't say that all of the Koch ads on Obamacare are deceptive, but the vast majority are. “

Besides fibbing to the American people, Harry shares many other similarities to Billie:

They are addicted to politics: Slapstick Harry may not be as cute or charming as Slick Willie, but he certainly shares his drive to hang around Washington, D.C. forever.

Reid is 74, meaning that he has spent some 46 years in politics! Since he’s never had a real job in his life, he should retire and work as a receptionist at a medical clinic so he can witness Obamacare horror stories for himself.

Meanwhile, Clinton is 67, meaning he has spent some 39 years in politics because, let’s be honest, Hillary and Bill come as a team and she would never be able to entertain a run for the presidency in 2016 without Sweet William at her side.

It’s time for these good ol’ (bad) boys to find a new gig.

They tell Hillary they love her. According to the New York Times, when Hillary won the Senate in 2006, Reid rang her telephone to congratulate her and ended the call with an adieu that made it sound like he was her wannabe boyfriend: “Love you.” At some point in their marriage, Bill must have exchanged the same affectionate words with Hillary.

Bill Clinton needs to step outside of Harry Reid’s body and they both need to permanently retire from politics and quit lying to the American public. In the meantime, be wary of 28-year-olds Democrats who are running for political office.