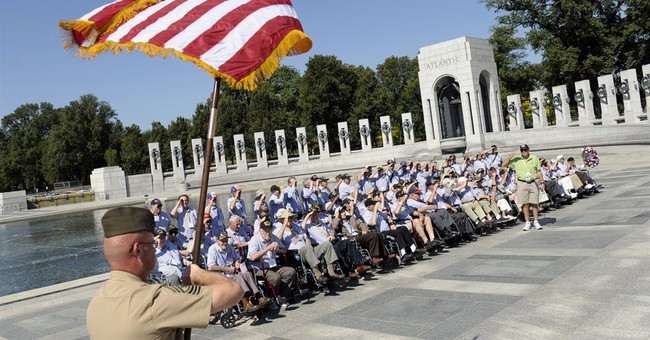 I realize Obama is quite busy playing fetch with Bo and Sunny. However, I hope he has a few moments to consider turning on the fountain at the WWII Memorial and un-barricading the remaining war memorials on the National Mall.

Our veterans of WWII, the Korean War and the Vietnam War are aging. Many of them are severely disabled, because of their heroism. It is immoral and embarrassing that our President would allow amnesty advocates to prance about on the sacred ground where taxpayers erected memorials to honor our veterans, rather than the actual veterans.

The National Mall is a national park and all national parks and memorials were closed during this government shutdown. Obama has repeatedly told Republicans, who tried to re-open the memorials, that he will not negotiate. (That’s always the sign of a leader; someone who wants his way or no way.)

When an exception was made so that our veterans were finally allowed to enter the WWII Memorial during this shutdown, they did not receive the full experience. A large, beautiful fountain is the centerpiece of the WWII Memorial, and it was turned off. The fountain makes the memorial come “alive” during the day and creates a sense of wonder at night, when the fountain is lit up.

These veterans traveled to D.C. on privately-funded “honor flights.” Many of them needed help walking around on this once-in-a-lifetime trip to experience war memorials that were built just for them—in the camaraderie of their friends who also fought in the same battles.

These memorials belong to our brave warriors, not our president. Our veterans paid for these memorials with their blood. Obama, meanwhile, never spent a day in his life on a battlefield, beyond possibly playing Battleship on the White House lawn with his ol’ buddy, Warren Buffett.

This WWII veteran told me: “The whole experience brought back floods of memories of those war years; my service years; my ‘good-ol-days.’ We had patriotism, love of country, respect for truth and a strong faith. Our country was, for a time, free and at peace.”

At the same time, he thought that it was not right that he and the other members of the honor flight were unable to see the Lincoln Memorial, the Korean Memorial, the Vietnam Veterans Memorial or the Korean War Veterans Memorial. Certainly, they appreciated the opportunity to see the WWII Memorial. But, they hardly received the full experience, since the beautiful fountain was off. Plus, their ages ranged from 85-to-97 and many of them were in declining health. So, most may never have another chance to return and get the full experience of visiting all the memorials.

Overall, the WWII veteran who I spoke with had a very positive outlook. He appreciated how Minnesota’s senators and representatives, including Rep. Erik Paulsen, Rep. Keith Ellison, Sen. Amy Klobuchar and Sen. Al Franken “took time out from their arguments” about the government shutdown and went to the airport in D.C. to greet the veterans as they deplaned from their honor flight.

He described their experience deplaning in D.C.: “It was like a wedding reception line. The airport was full of people, and when they saw our bunch of old soldiers coming off the plane on canes and wheelchairs, everybody started clapping, and kept clapping, and people were reaching out, shaking our hands and saying: ‘Thank you for your service!’ And, I can't believe I'd ever do such a thing, but, before I realized it, I was actually smiling and shaking hands with Amy Klobuchar, Eric Paulsen and Al Franken. Ellison was there to greet our Minnesota group too, but I missed him. Al Franken said to me: ‘Thank you for giving our country freedom.’ And I said to him, ‘Well, I hope we don't have to do it again!’”

These brave veterans were “so pleased” to have a chance to see the WWII Memorial and tour D.C. that they all walked away feeling very appreciative of their honor flight experience. Nevertheless, this veteran expressed concern for the way President Obama has treated our veterans. He said: “The current regime doesn’t seem to want people to have that patriotic feeling that you get when you visit the war memorials. I think they’re trying to reduce the feeling of patriotism. It was a very patriotic thing for America to do; to honor the vets by building war memorials. I can’t see them putting up any new memorials today, unless it’s a monument to the immigrants.”