Holy Radicals in a Fallen World 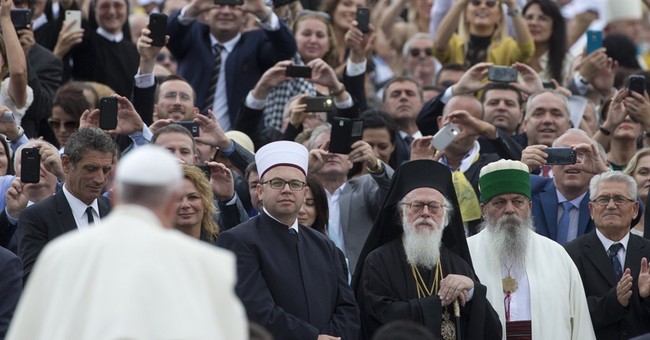 It's 7:15 Tuesday morning and like most mornings, Fr. Robert Barron, rector of the Mundelein Seminary in Mundelein, Illinois, unassumingly takes an open seat in the audience. Fr. Barron is best and popularly known for the recent PBS series "Catholicism" and his Word on Fire ministry. But here he is on a serene campus outside of Chicago, gathered with his community for prayer.

After a brief greeting, the newly announced archbishop of Chicago, Blase Cupich, slips in alongside Fr. Barron. "We are people not to worry, but to depend on the mercy of God," Cupich began as he greeted the audience minutes later, expressing his happiness at being with them to celebrate morning Mass.

Cupich said that this was one of the first things he wanted to do as the new archbishop: be with the seminarians under his care. In his homily, he urged them to embrace their roles as beacons of reconciliation and healing. "You all are here because you have heard the word of God," Cupich said. "Be taken by it and share it."

Since the news of a new Chicago archbishop broke on Sept. 20, the buzz has been about politics. Cupich, seen as a "moderate," is replacing Cardinal Francis George, viewed as a "conservative." But there were no politics here, as people prayed in unison and shared in spiritual fellowship.

As in many of his columns, homilies and speeches, Cupich appeared to be something of a radical, that is, he frequently pointed to Jesus Christ and the Gospels, who and which are exactly that.

We're approaching midterm elections, a season that can tend toward polarization. It's good to keep in mind, however, that there is something "majestic" about the American Constitution, as the late William F. Buckley Jr. put it. In a 1979 speech on "What Americanism Seeks to Be," he praised the Constitution, in particular the Bill of Rights, for prohibiting government from infringing on human dignity. But it wasn't merely some grand idea or abstract notion.

"It grew out of a long, empirical journey," Buckley reflected, "the eternal spark of which, of course, traces to Bethlehem, to that star that magnified man beyond any power of the emperors and gold-seekers and legions of soldiers and slaves: A star that implanted in each one of us that essence that separates us from the beasts and tells us that we were made in the image of God and were meant to be free."

When he met the press in Chicago upon the announcement of his new post, Archbishop-elect Cupich said that Pope Francis had just appointed "a pastor, not a message" to Chicago. Rather than distract ourselves with who's in, who's out and what that might mean, as if we're scoring a baseball game or presidential debate, we might consider that sometimes news events might be an occasion for examining our consciences and renewing our most fundamental commitments, rather than engaging in partisan punditry.

In no small part because of the constant bombardment that our senses experience daily and the business of our lives, we often miss the greater context of things. In his work, Barron tries to help with this, renewing our understanding of Christian culture.

If we are to be good stewards, we will consider that not everything is ideology and profit, that among the causal idolatry of popular and political culture, we have lost sight of the spark that we need, for it is the exercise of virtue that keeps us honest and free. We need holy radicals among us. Priests, pastors, parents, sons and daughters, voters, and yes, even businesspeople and politicians.