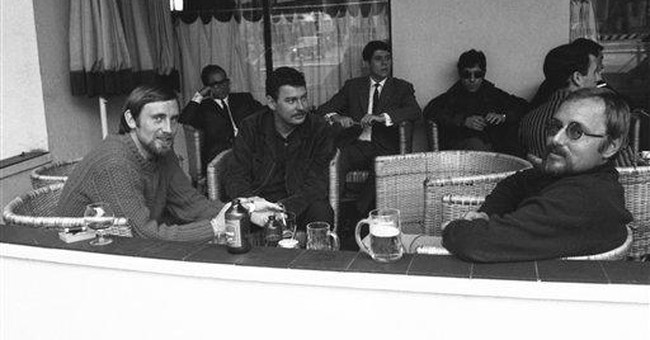 The Fourth of July came early this year. It fell, somewhat ironically, on the anniversary of the fall of Saigon.

On the morning of April 29, I was co-hosting a national radio show, when a woman named Kim called from Detroit. At 19 years old, she and her family were among "the boat people" who fled Vietnam in 1975, escaping the Communist takeover. Her father "knew that he didn't want to be there when (the Communists) took over Saigon." He had been born in Hanoi and moved south "because he wanted freedom," she said. And now he was going to make sure his entire family had it.

When Kim's family's boat failed, American servicemen took them the rest of the way and gave them water. "But these people don't know us," Kim remembered saying. One serviceman even gave Kim, she says, a $10 bill. "He said I might need it. I didn't know the value of it." Kim and her family didn't know a word of English. But once she got to a refugee camp, she was taught it. "They didn't have to do that," she remembered, 35 years later, holding back tears. "This is the greatest country. I am forever grateful."

When Kim's family arrived on these shores, her father was full of hope and determination. "If you cannot succeed here, you cannot do it anywhere else," she remembers him declaring. "Set your goal and go after it." Kim did; she's a physician. Her early experiences provided the inspiration she needed to succeed. She recalls, "When we lined up in Detroit for unemployment, for food stamps, I'd never seen my dad so sad. He said, 'We have our hands and feet, why are we standing here?' We left the line."

When people talk about American exceptionalism, it is the hope Kim's father saw here that they are thinking of. Kim called in response to a letter that to this day is hard to read. It's about an American surrender.

As we were moving out of South Vietnam, the Khmer Rouge was taking over nearby Cambodia. The America ambassador asked Prince Sirik Matak of that country if he wanted to flee, too. He did not. And he explained that he "never believed for a moment that (America) would have this sentiment of abandoning a people, which has chosen liberty. You have refused us your protection, and we can do nothing about it. ... I have only committed this mistake of believing in you."

Matak, who would be shot by the Khmer Rouge, didn't err, we did. Our political leaders disappointed him, and our servicemen were ill-served and underappreciated.

After the radio show that morning, another listener e-mailed me. I had referred to Kim's call as the welcome parade Vietnam veterans never received. In response, he said: "I'm one of those vets and your observation made me feel better about the sacrifice I made small though it was compared to that of others." He wrote: "Several years ago my daughter-in-law mentioned my year in Vietnam and thanked me for serving there. I surprised her when I told her that she was the first person to tell me that."

"Every morning I wake up and thank God that I'm here," said Mike, calling the same radio program during the same week. He was responding to a New York Times story about American expatriates renouncing their citizenship.

Mike, who was born in Croatia but raised a family here, would have none of it. A listener to conservative radio, he's become too used to hearing not from overtaxed executives living in Switzerland, but regular folks incensed at the major shift the Democratic Party seems to be forcing on the country.

"I cannot believe that one and a half years of Obama will bring the American people to its knees," Mike said. "You have to fight for your freedom."

There is something special about America. We have to work to keep it that way, forever treasuring the beacon that our nation is and needs to be, and never forgetting the dad from Hanoi, the proud soldiers or the lovers of freedom from all parts of the world.