A Democrat Stands Up 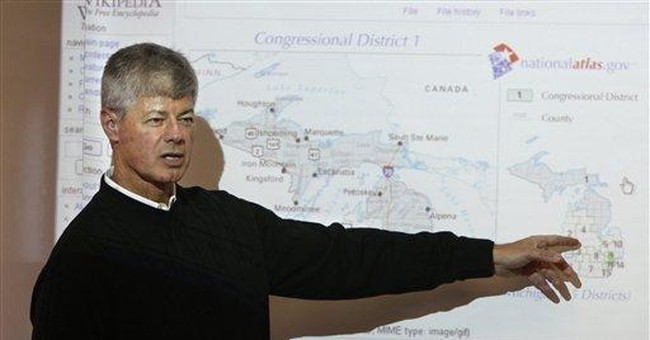 Stupak is a pivotal hero or villain of the health-care-reform debate in Washington, depending on your position on abortion and religious liberty. In round one of the battle, the Michigan congressman inserted valuable prohibitions and protections into the House of Representatives health bill. In round two, though, the White House and House Democratic leadership decided to ignore him, assuming either that he was bluffing about how many members he had on his side or that they were better negotiators -- or arm-twisters or palm-greasers -- than he is.

Casey, a Democrat, died in May 2000. At the time, former Bill Clinton adviser James Carville told me: "He was just the kind of person that made the whole Washington establishment completely uncomfortable, they could never understand him."

A little bit like Bart Stupak? As we watched other members who claimed to be pro-life take cover and ignore or otherwise jettison their principles, Stupak seemed a little out of place.

I think of House Minority Leader John Boehner as an example of a guy who thanklessly defends the most innocent human lives, despite getting grief from well-intentioned, hardworking pro-lifers. I can't help wondering: If Boehner can't get a little love, what's Bart Stupak in for? Well, he's described his life since he began fighting his health-care battle as a "living hell." His staff is inundated with angry calls and e-mails. His wife has been feeling the toll, as well. "All the phones are unplugged at our house -- tired of the obscene calls and threats. She won't watch TV," he told The Hill newspaper. "People saying they're going to spit on you. ...That's just not fun."

The late governor Casey was also humiliated by his party. Despite his pleas to speak on abortion at the 1992 Democratic Convention, he was roundly snubbed, and later marginalized in the press. The Democratic Party, which claims to be a beacon of tolerance, doesn't have a lot of it when it comes to those who defend the most innocent among us.

The whole political scene, as pro-life Democratic health-care votes have been going back and forth or otherwise been up in the air, seems to be haunted by Casey. And, specifically, by his words at the University of Notre Dame in 1995.

There, Casey said: "And so, it is for me the bitterest of ironies that abortion on demand found refuge, found a home -- and it pains me to say this -- found a home in the national Democratic Party. My party, the part of the weak, the party of the powerless."

Casey continued: "You see, to me, protecting the unborn child follows naturally from everything I know about my party and about my country. Nothing could be more foreign to the American experience than legalized abortion. It is inconsistent with our national character, with our national purpose, with all that we've done, and with everything we hope to be."

Our current president, who claims to be all about hope, visited that same school and tried to wash the words of Casey out of our political memories. But he can't. Bart Stupak won't let him.

Not much has changed in the decade since Casey died. "We're members without a party," Stupak told the New York Times, speaking of pro-life Democrats. When he was a freshman in the House, he requested a seat on the Energy and Commerce Committee. He told the paper that "I had one or two members tell me I'd never get on because I'm right-to-life."

During the endgame negotiations over the health-care bill, Stupak said that some in his party have been telling him: "If you pass the Stupak amendment, more children will be born, and therefore it will cost us millions more. That's one of the arguments I've been hearing." Money's how they think they can win his conscience? As he said, "This is life we're talking about." The party has its problems, but like Casey, Stupak has a clear conscience. He's a witness, though we may differ drastically on many issues, the doughty congressman from Michigan deserves thanks and praise for standing up to his party for the most basic human right.