A New Declaration for America 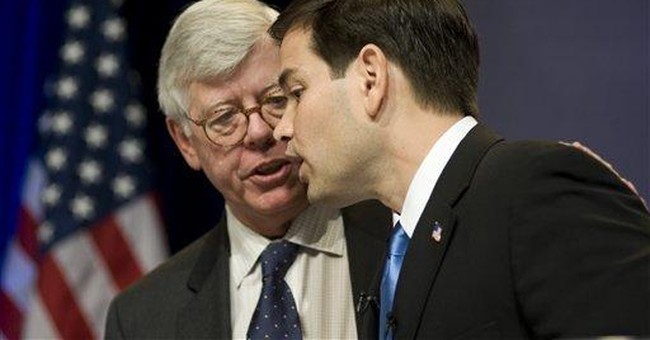 I recently joined former Attorney General Ed Meese and a number of leaders of conservative think tanks and other groups in signing the Mount Vernon Statement. When I watched the press coverage that evening, I saw the event through the media's prism: a bunch of white guys reaffirming what some dead white guys said. Never mind that all types of people were in the room. Never mind that thousands had signed the conservative declaration online, overnight. Never mind that the Mount Vernon Statement was a reaffirmation, not just of constitutional values, but also of a tendency in the very air of the country right now. It's a mood that has inspired tea parties and sold books like Mark Levin's "Liberty and Tyranny." There's a sense -- and not just among trusted Reagan Cabinet secretaries -- that we may be on the brink of losing something integral to America.

This sense was palpable at an annual gathering of conservatives the next day. The Conservative Political Action Conference had not been underway in Washington, D.C., for an hour when Marco Rubio, the son of Cuban refugees, took the stage and blew away the older-white-guy lie. Rubio, who is running for U.S. Senate in Florida, is challenging the current Republican governor of that state for the seat. Rubio gets across by talking with a sense of urgency about what America could be on the verge of forfeiting. His words could have been ripped from the Mount Vernon Statement, which in a very fundamental way simply reaffirmed constitutional principles.

The statement reads, in part: "We recommit ourselves to the ideas of the American Founding. Through the Constitution, the Founders created an enduring framework of limited government based on the rule of law. They sought to secure national independence, provide for economic opportunity, establish true religious liberty and maintain a flourishing society of republican self-government. ... Each one of these founding ideas is presently under sustained attack. In recent decades, America's principles have been undermined and redefined in our culture, our universities and our politics. The self-evident truths of 1776 have been supplanted by the notion that no such truths exist. The federal government today ignores the limits of the Constitution, which is increasingly dismissed as obsolete and irrelevant."

I suspect Marco Rubio hadn't time to read the statement before he took the stage, but he didn't need to. He has read the country's founding documents and he knows how they have helped make America great. He also looks around, and sees -- in his own state and elsewhere -- politicians and elected officials slouching toward something different: a push toward statism. Out with the flourishing of freedom, in with a behemoth of a welfare state. And Rubio doesn't like it, because he knows history and he knows how harmful that instinct has been. He knows, further, that the American identity leans toward and hungers for something else. Which is why he referred, in his CPAC speech, to the upcoming congressional elections as being about our "identity" as a nation. He was received as a rock star at the conference -- if I had a dollar for everyone who told me they got to shake his hand, I would be retiring at my young age -- not because he's a fresh new face, but because what he says rings true. It rings true to Americans who believe that there is something special about this country that, as Rubio puts it, keeps boatloads wanting to be a part of it.

In his speech to the same gathering, former Massachusetts Gov. Mitt Romney put it this way: "Ours is the creed of the pioneers, the innovators, the strivers who expect no guarantee of success, but ask only to live and work in freedom. This creed is under assault in Washington today. Liberals are convinced that government knows better than the people how to run our businesses, how to choose winning technologies, how to manage health care, how to grow an economy, and how to order our very lives. They want to gain through government takeover what they could never achieve in the competitive economy -- power and control over the people of America. If these liberal neo-monarchists succeed, they will kill the very spirit that has built the nation -- the innovating, inventing, creating, independent current that runs from coast to coast."