An Imperfect Senator's Road to Redemption 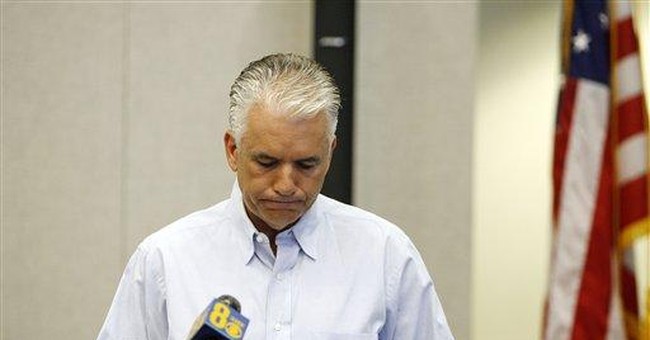 Nevada Republican Sen. John Ensign was unfaithful to his wife; there's no excusing broken vows. But the steps he's taken since the story broke on Wednesday provide a reminder that there is a road to redemption in truth. And not just for one U.S. senator and his family, but for American politics. In his public confession and acts of atonement, Ensign has brought a refreshing change to the roster of recent Beltway loose-belt scandals that have hit both sides of the aisle.

In a press conference, Ensign -- allegedly motivated by a blackmail threat - admitted to an affair with an employee. He didn't excuse his misdeed. He said he regretted it. He apologized for it. He said, "It is the worst thing I have ever done in my life." He said that in the wake of the adultery, he and his wife sought counseling, and claimed that their marriage has never been stronger.

The next day, Ensign resigned his leadership post in the Senate. That same day, the media, naturally, was all atwitter. Twitter, too.

That Ensign cheated on his wife wasn't so much the cause of the outrage as was the fact that he had dared to criticize Bill Clinton during the Monica Lewinsky debacle. Ensign said that the president's behavior was "an embarrassing moment for the country."

Well, it was. Ensign's own embarrassing moment doesn't change that.

On MSNBC's "Hardball," host Chris Matthews exposed social conservatives -- Ensign counts himself among us -- as "no different than anybody else." This is not breaking news.

The left-wing blogosphere quickly pounced on Ensign's official remarks regarding the institution of marriage: "Marriage recognizes the ideal of a father and mother living together to raise their children," he said from the Senate floor, in a statement in support of the Federal Marriage Amendment. He said, "Marriage is the cornerstone on which our society was founded," a sacred institution predating our Constitution and government.

Again, a politician's failings do not render all to which he subscribes morally null. The facts remain: marriage is a cornerstone, regardless of the many temptations to violate it. In a bastardized, and by now conventional, view of hypocrisy, it is unacceptable for someone who is not a perfect person to ever make a statement grounded in conscience, morality or natural law.

Presumably, then, all Christians should throw out their Book.

The Bible is and always has been directed to sinners. And, save for the star of the show, preaching comes from sinners, too. Christ warned Peter in Gethsemane, "Watch and pray that you may not undergo the test. The spirit is willing but the flesh is weak." In Romans, Saint Paul said: "What I do, I do not understand. For I do not do what I want, but I do what I hate." Men (and women) believing one thing and falling short has a long history.

In an editorial, the Washington Post decreed, "Mr. Ensign's marital infidelity is a matter between him and his wife. Mr. Ensign's hypocrisy ... is a matter of legitimately broader interest." Marital infidelity isn't a wholly irrelevant issue when it comes to public service. It does speak to character. It's not an illegitimate question for a constituent to wonder what a politician's oath of office means to him once he's broken his marriage vows. But hypocrisy isn't what the Post and so many others say it is.

"We modern men and women hate hypocrisy, but we have a mistaken idea of what this means." The Rev. Thomas D. Williams, author of "Knowing Right from Wrong: A Christian Guide to Conscience" (Hachette, 2009) recently said. "Some say that a hypocrite doesn't practice what he preaches, but this isn't hypocrisy. None of us perfectly practices what he preaches. We all fall short. The solution of lowering our moral bar to match our imperfect behavior doesn't make us less hypocritical; it just makes us more mediocre. Keeping the bar high and maintaining our moral ideals helps us to strive for moral greatness rather than settling for moral poverty."

I confess that my first instinct was certainly not to praise Ensign upon learning of his infidelity. But in our world of flawed men and women, surely there should be a little room for empathy on an op-ed page. John Ensign did a shameful thing. He is ashamed of it. I'm sure he won't be perfect from here on in, but his actions in the wake of his fall make a statement about personal responsibility -- to family, to a public oath, to truth. And in this, he is not setting a poor example.