Biden Can't Abide By the Truth 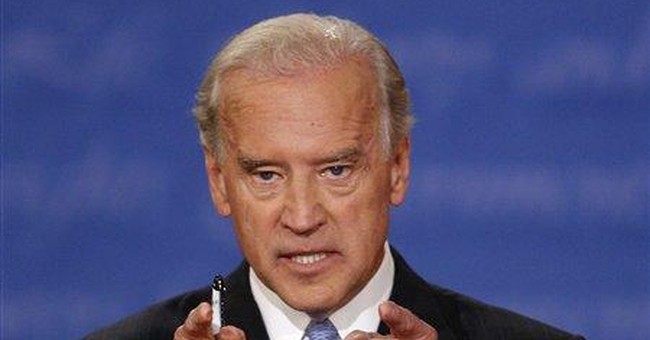 Just take a listen to what the Delaware Democrat had to say six years ago, during the run-up to the U.S. invasion of Iraq: "I do not believe this is a rush to war. I believe it is a march to peace and security. ... (Saddam Hussein) possesses chemical and biological weapons and is seeking nuclear weapons." Further, Biden insisted: "We must be clear with the American people that we are committing to Iraq for the long haul; not just the day after, but the decade after."

It was a much different position from the one the chairman of the Senate Foreign Relations Committee took during the first Bush administration, when he opposed an intervention to drive Hussein's Iraqi troops out of Kuwait. After the Gulf War, Biden admitted he had been wrong and begged Bill Clinton to go after the Middle Eastern dictator.

Now, of course, after he voted for the war in Iraq under the second Bush administration, he's a standing member of the surrender party, insulting Gen. David Petraeus as the mastermind of the surge pleaded his case before the Senate. So much for the long haul. Biden was against war in Iraq before he was for it before he was against it.

Yet, somehow, conventional wisdom heralds him -- along with Barack Obama, during the first presidential debate in Mississippi -- as a wise man of foreign policy. But he's far from it, and, further, Iraq isn't the only area where Biden shows bad judgment.

Obama's running mate also can't read the Constitution, a basic requirement, one would think, of serving in the government that august document defines. After declaring Cheney a menace, Biden went on to unilaterally redefine the office of the vice president.

He proclaimed: "The only authority the vice president has from the legislative standpoint is the vote, only when there is a tie vote. He has no authority relative to the Congress. The idea he's part of the legislative branch is a bizarre notion invented by Dick Cheney to aggrandize the power of a unitary executive, and look where it has gotten us. It has been very dangerous."

Not a part of the legislative branch?

Biden insisted on playing the constitutional lawyer during prime-time television, a role he clearly can't hack. The doughty senator clumsily attempted to pin Cheney to the ropes with this weak jab: "The idea he doesn't realize (sic) that Article I of the Constitution defines the role of the vice president. That's the executive branch. He works in the executive branch." A small detail for Biden: Article I of the Constitution defines the legislative powers of the federal government. And the veep shows up there.

And from Cheney, we can move onto another branch of the federal government, so we've covered all three in discussing the problem that is Biden. When Clarence Thomas went before the Senate Judiciary Committee in 1991, Biden put on a show, as he tends to. He quoted Thomas allegedly supporting judicial activism. Thomas didn't remember the quote. That's because he never said such a thing, he learned from his researchers after the debate. Biden took him completely out of context.

In his book, "My Grandfather's Son" (Harper Perennial, 2008), Thomas recalls his interaction with Biden: "Throughout my life I've often found truth embedded in the lyrics of my favorite records. At Yale, for example, I'd listened often to 'Smiling Faces Sometimes,' a song by the Undisputed Truth that warns of the dangers of trusting the hypocrites who 'pretend to be your friend' while secretly planning to do you wrong. Now I knew I'd met one of them: Senator Biden's smooth, insincere promises that he would treat me fairly were nothing but talk."

A dangerously inconsistent senator full of "smooth, insincere promises" doesn't exactly sound like change we can believe in, does it?