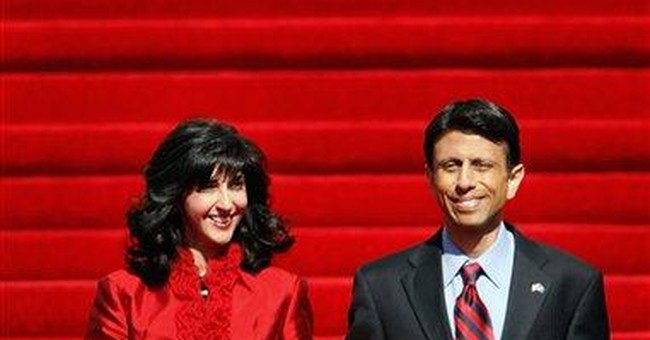 A poisonous cloud has been circling the Republican presidential nomination this season. First, it was "the Mormon question" raised against former Massachusetts Gov. Mitt Romney, which was used as a political sledgehammer by one of his primary opponents. Now, it's religious writing from the youth of the still-young Louisiana Gov. Bobby Jindal. Can we please not go there again? Can we please not use religion against another candidate this cycle?

As the media twitters about recently elected Jindal being considered as a possible choice for John McCain's vice presidential running mate, a buzzkill arrives. On the Left blogosphere, an article Jindal wrote as a young convert to Catholicism has resurfaced, presumably to serve as disqualifying evidence.

As it happens, I don't want McCain to pick Jindal for his ticket, but not because of this. Jindal is a young, bright light of the Republican Party. He's a whiz kid, an authentic conservative, and a man who loves his country, his family and his God. Jindal has quite a job before him in Louisiana. As a fan of his, I want to see him do it. Then we can talk about electing him president, after he's done the impossible and changed the face of Louisiana politics -- a job he is already hard at work doing.

This is not the first time Jindal's religious writings have surfaced. They were used against him during his campaign for governor, as Democrats tried to take Protestant voters from him, accusing him of being "anti-Protestant." As it happened, their accusation was based on a quote from John Calvin that Jindal used in one of his pieces. In defeat, I hope the Dems hold remedial reading classes for their political consultants.

Now, the insinuation appears to be that Jindal is a weirdo. The article that is circulating revolves around an "exorcism" Jindal experienced as an undergraduate at Brown University. While exorcisms should not be tried at home or in your dorm room, it is not breaking news that there is evil in the world. That a young man recognized this while in college is not a scandal.

Although calling the then-23-year-old's story "bizarre," the "Talking Points Memo" Web site concedes, it's not a "blockbuster." Writers there warn, "Jindal's battle with the dark forces may become an issue should his Veep candidacy proceed. While it's hardly a blockbuster revelation, it could provide fodder for bloggers and late-night comics to turn his candidacy into a media sideshow."

How lovely would it have been if these liberal bloggers had added, "While all are free to do so, that, of course, would be silly and antithetical to the spirit of our founding."

As I said, I don't think now is the time for Jindal to go national. But that these writings would yet again be used against him leaves me daydreaming about a Romney-Jindal ticket. Romney, of course, knows all too well that there is religious intolerance in this country.

As Romney said in his speech on "Faith in America" during the primary campaign last year: "It is important to recognize that while differences in theology exist between the churches in America, we share a common creed of moral convictions. And where the affairs of our nation are concerned, it's usually a sound rule to focus on the latter -- on the great moral principles that urge us all on a common course. Whether it was the cause of abolition, or civil rights or the right to life itself, no movement of conscience can succeed in America that cannot speak to the convictions of religious people."

He emphasized in a follow-up speech to the Becket Fund for Religious Liberty this spring "that non-believers have just as great a stake as believers in defending religious liberty."

The freedom whether to believe is a fundamental one. We all should recognize it and defend it. Democrats, Republicans, religious persons and atheists ought to stand united.

In his New Oxford Review piece on encountering the devil at college, Jindal concluded, "I learned a lasting lesson in humility and the limits of human understanding. Was the purpose of that night served when so many individuals were inducted into the Church? Did I witness spiritual warfare? I do not have the answers, but I do believe in the reality of spirits, angels and other related phenomena that I can neither touch nor see."

While we're all likely to hear more details about what Jindal described in his "exorcism" piece, most stories will skip over the bottom line. Jindal knows there is good and evil, and prays for the wisdom to know difference and to stay away from the evil. That's a confidence-inspiring moral compass. The essay in question demonstrates an impressive core to Jindal. If only more politicians had such humility -- and Jindal had it before he was 25!

As George Washington put it, "No people can be bound to acknowledge and adore the invisible hand which conducts the affairs of men more than the people of the United States." Bring on the public servants who so believe and their defense of the right not to.