'Hope' and 'change' a gimmick 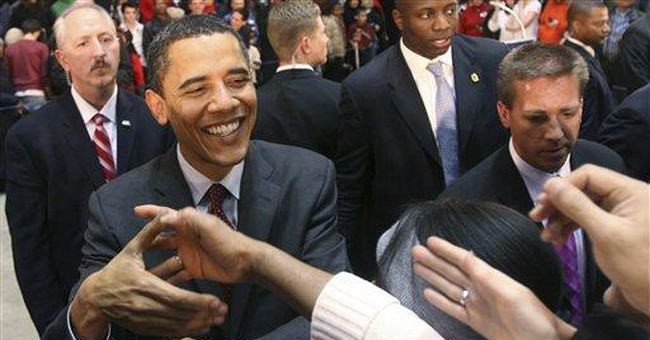 Are YOU paying attention to this election? Have YOU heard what Barack Obama has to offer?

If you listen to Obama, this election is the biggest ego boost ever to hit American politics. Like best sellers "You: The Owner's Manual," "You: On a Diet," and "You: Staying Young," this presidential campaign season is all about YOU.

YOU can have hope and change if you have the audacity to follow this bright, handsome, dynamic speaker's lead. Obama says, "There's a moment in the life of every generation when that spirit has to come through, if we are to make our mark on history, and this is our moment. This is our time." All you have to do is vote for this great guy with the great-looking family!

YOU have the power to initiate hope and change. The alternative, he says, is dire. It's 100 years of war in Iraq. It's decidedly not change. And frankly, it's old versus young. It's yesterday versus tomorrow.

If Obama winds up defeating the formerly inevitable Hillary Clinton to secure the Democratic nomination, his talk of "you" could be the death knell for Republicans in 2008. Obama seems to have a dog whistle for we conservatives who have not been enthusiastic about John McCain, who during the primaries famously contrasted himself with former businessman Mitt Romney by announcing "I led for patriotism, not for profit." (What exactly is wrong with being successful in business, senator?) Then, at a recent rally I attended at the Meadowlands in New Jersey, Obama announced, "I love the free market" and "I love capitalism." Hope, change and an end to class warfare? It's as if he's saying, "Hey, YOU, right-winger, you too can have hope and can change the world!"

However, if we just look beyond the attractive Obama package and ourselves for a moment, we might remember that the election is about actual issues. What are we hoping for? What is the "change" that the pro-Obama Kennedys are so excited about?

The fresh, young face of Obama represents change, yes. But he also represents something very familiar: liberalism. Government as a permanent, inefficient, out-of-control crutch. Never mind the support of Edward Kennedy, who for many is the face of liberalism in America; Obama himself is the most liberal senator in the U.S. Senate.

With Obama you get a naivete about foreign policy. You get a radical on abortion who has opposed the most reasonable pullbacks on the Supreme Court's inappropriate lawmaking, at a time when a chunk of Americans are for restrictions on the issue. You get someone who will pull troops out of Iraq "immediately," with no mind paid to the consequences to our allies in the region and our own security.

The only way to beat superficial, feel-good talk about hope and change is for McCain to have the daring to offer a substantive, substantial contrast. He needs to continue to speak out about the consequences of surrendering in Iraq.

But he also needs to talk about the job he is running for. While a president who wears well is a great thing, the chief role of that office is not to make you have a warm, fuzzy feeling inside. The president protects and defends the Constitution. He is commander in chief of the armed forces. He is not an entertainer. On the night of the so-called Potomac primary, McCain demonstrated an appropriate humility on the road to the White House at a time of war: "I do not seek the presidency on the presumption that I am blessed with such personal greatness that history has anointed me to save my country in its hour of need.

I seek the presidency with the humility of a man who cannot forget that my country saved me. I am running to serve America, and to champion the ideas I believe will help us do what every American generation has managed to do: to make in our time, and from our challenges, a stronger country and a better world."

I have reservations about McCain, but he is responsible on this war on terror and appreciates the significance of the office of commander in chief. He understands that talking about "hope" and "change" isn't the same thing as leadership; it's a gimmick. And we've already expended too much blood and treasure in a war that was not of our choosing to put our trust in gimmicks.