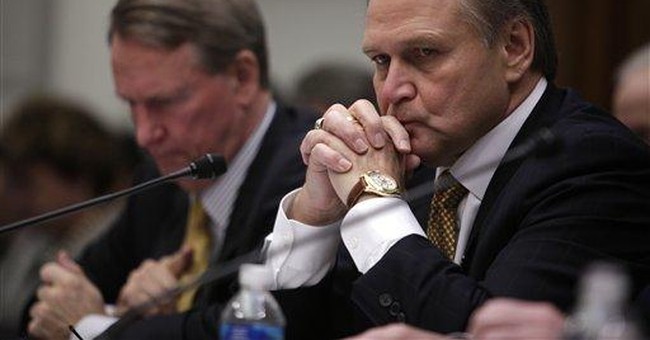 WASHINGTON -- So much for the wisdom of The People.

A new report from the Intercollegiate Studies Institute (ISI) on the nation's civic literacy finds that most Americans are too ignorant to vote.

Out of 2,500 American quiz-takers, including college students, elected officials and other randomly selected citizens, nearly 1,800 flunked a 33-question test on basic civics. In fact, elected officials scored slightly lower than the general public with an average score of 44 percent compared to 49 percent.

Only 0.8 percent of all test-takers scored an "A."

America's report card may come as little surprise to fans of Jay Leno's man-on-the-street interviews, which reveal that most people don't know diddly about doohickey. Still, it's disheartening in the wake of a populist-driven election celebrating joes-of-all-trades to be reminded that the voting public is dumber than ever.

The multiple-choice ISI quiz wouldn't deepen the creases in most brains, but the questions do require a basic knowledge of how the U.S. government works. Think fast: In what document do the words "government of the people, by the people, for the people" appear? More than twice as many people (56 percent) knew that Paula Abdul was a judge on "American Idol" than knew that those words come from Lincoln's Gettysburg Address (21 percent).

In good news, more than 80 percent of college graduates gave correct answers about Susan B. Anthony, the identity of the commander in chief of the U.S. military, and the content of Martin Luther King Jr.'s "I Have a Dream" speech.

But don't pop the cork yet. Only 17 percent of college grads understood the difference between free markets and centralized planning.

Then again, we can't blame the children for what they haven't been taught. Civics courses, once a staple of junior and high school education, are no longer considered important in our quantitative, leave-no-child-behind world. And college adds little civic knowledge, the ISI study found. The average grade for those holding a bachelor's degree was just 57 percent -- only 13 points higher than the average score of those with only a high school diploma.

Most bracing: Only 27 percent of elected officeholders in the survey could identify a right or freedom guaranteed by the First Amendment. Forty-three percent didn't know what the Electoral College does. And 46 percent didn't know that the Constitution gives Congress power to declare war.

What's behind the dumbing down of America?

The ISI found that passive activities, such as watching television (including TV news) and talking on the phone, diminish civic literacy. Actively pursuing information through print media and participating in high-level conversations -- even, potentially, blogging -- makes one smarter.

The ISI insists that higher-education reforms aimed at civic literacy are urgently needed. Who could argue otherwise? But historian Rick Shenkman, author of "Just How Stupid Are We?" thinks reform needs to start in high school. His strategy is both poetic (to certain ears) and pragmatic: Require students to read newspapers, and give college freshman weekly quizzes on current events.

Did he say newspapers?! Shenkman even suggests government subsidies for newspaper subscriptions, as well as federal tuition subsidies for students who perform well on civics tests. They could be paid from a special fund created by, say, a "Too Many Stupid Voters Act."

Not only would citizens be smarter, but also newspapers might be saved. Announcements of newsroom cuts, which ultimately hurt quality, have become routine. Just this week, USA Today announced the elimination of about 20 positions, while the Newark Star-Ledger, as it cuts its news staff by 40 percent, lost almost its entire editorial board in a single day.

In his book, Shenkman, founder of George Mason University's History News Network, is tough on everyday Americans. Why, he asks, do we value polls when clearly The People don't know enough to make a reasoned judgment?

The founding fathers, Shenkman points out, weren't so enamored of The People, whom they distrusted. Hence a Republic, not a Democracy. They understood that an ignorant electorate was susceptible to emotional manipulation and feared the tyranny of the masses.

Both Shenkman and the ISI pose a bedeviling question, as crucial as any to the nation's health: Who will govern a free nation if no one understands the mechanics and instruments of that freedom?

Answer: Maybe one day, a demagogue.