Put the Gloves Back On 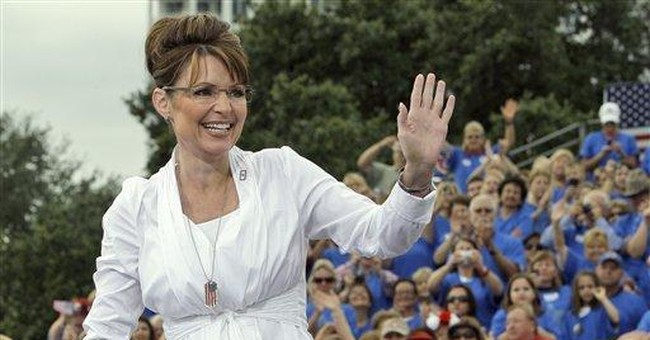 WASHINGTON -- When Sarah Palin said she was taking off the gloves, she wasn't just whistling "Onward, Christian Soldiers."

In the wake of the vice presidential debate, Palin has trained her moose-hunting sights on bigger trophies -- Barack Obama and the media.

In Colorado a few days ago, she told fans that Obama pals around with terrorists. Later in Clearwater, Fla., resplendent in white against a backdrop of red, white and blue, she said, "This is not a man who sees America the way that you and I see America, as the greatest source for good in this world. I'm afraid this is someone who sees America as imperfect enough to work with a former domestic terrorist who had targeted his own country."

On Monday, Bill Kristol wrote in his column that Palin thinks Obama's association with the Rev. Jeremiah Wright needs to be discussed more. Because hardly anyone ever mentioned it?

Palin also took the opportunity in Clearwater to deflect criticism of her interview with Katie Couric. First she joked that she was only working for Tina Fey's job security. Then she said the reason she did so poorly in the interview was that she was annoyed.

We are to infer that the reason Palin gave answers that ranged from ridiculous to nonsensical was that she was merely withholding her insights to demonstrate her pique? Right.

The real Sarah Palin is free at last. She's not just a hockey mom after all. She's Palin the Impaler. Pit bulls beware.

No one who watched the vice presidential debate should be surprised. Palin's performance, notwithstanding her adorable dodges of questions she didn't like, was essentially a cri de coeur to America's non-elite.

Democrats and other critics distracted by her winks may have missed the message, but Palin's target audience heard it loud and clear. She is like the high-pitched whistle only dogs can hear. While Democrats heard non-answers, superfluous segues and cartoon words -- shout-out, I'll betcha, doggone, extra credit -- Republicans heard God, patriotism, courage, victory.

It's called code, and Republicans are fluent.

It isn't just the "maverick" word, which we now may consign to the Cliche Crematorium. Sprinkled throughout Palin's remarks were phrases that set the free associative mind in motion.

-- "Say it ain't so, Joe, there you go again" was Ronald Reagan all over again.

-- "I know education you are passionate about with your wife being a teacher for 30 years, and God bless her. Her reward is in heaven, right?" Every evangelical Christian heard her rallying cry -- Onward, Soldiers!

-- "Because here you voted for the war and now you oppose the war." Did anybody hear flip-flop?

A television audience won't remember facts -- and most won't race to FactCheck.org -- but they'll remember impressions. Palin successfully conveyed to those she was targeting that she is a Ronald Reagan-ish outsider who puts God and country first. And The Other is just like that elitist, flip-flopping John Kerry.

That's a plateful of imagery and a buffet of touchstones familiar to those who distrust "elitists" and who recognize in Palin a kindred regularness.

Time magazine examined voting habits and concluded that most people do not vote for issues, but rather for the candidates. Specifically, they vote for people who are most like themselves. Which is why McCain and Palin have amped up their rhetoric of difference.

Neither McCain nor Palin would dare mention Obama's middle name, Hussein, but they can play up Obama's past associations and let others connect the dots. Terrorist. Muslim. Dangerous. Other.

It is legitimate to question character and dubious associations -- and Ayers is certifiably dubious. The truth is, Obama should have avoided Ayers, and his denouncement of Wright was tardy. But this is a dangerous game.

The McCain campaign knows that Obama isn't a Muslim or a terrorist, but they're willing to help a certain kind of voter think he is. Just the way certain South Carolinians in 2000 were allowed to think that McCain's adopted daughter from Bangladesh was his illegitimate black child.

But words can have more serious consequences than lost votes and we've already had a glimpse of the Palin effect.

Dana Milbank of The Washington Post reported that media representatives in Clearwater were greeted with taunts, thunder sticks and profanity. One Palin supporter shouted an epithet at an African-American soundman and said, "Sit down, boy."

McCain may want to call off his pit bull before this war escalates.