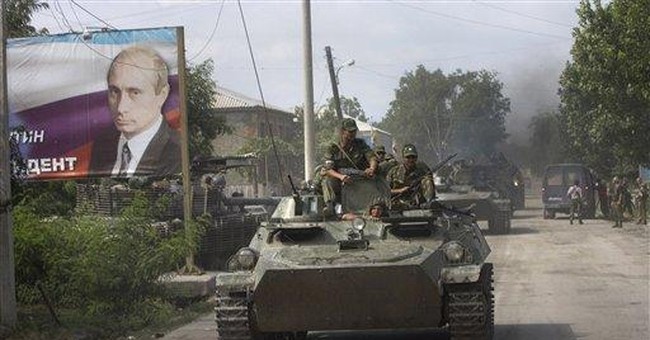 Beijing is weird. First of all, you can't breathe the air. Second, how 'bout those drummers? Sure, they're perfect, but that's the point. A billion Chinese see 2,000 drummers in sync and say, "Well done, my little emperor son." I see 2,000 drummers all moving with one motion and I'm thinking: "Whoa." Can anybody say MIL-I-TAR-Y PRE-CI-SION?

Hey, which reminds me. What's up with Georgia? This is not good, Vlad. You and I have had our moments. And, OK, fine, your dog's bigger than mine. A lot bigger. Stronger and faster, too. We got it. But you can't just go invading democratically elected countries that are U.S. allies. You can't have everything, Vlad. If you don't stop, I'm going to have to do something and you know I don't want that. What I want is for you to not make me look like a fool.

Look, Vlad. Seven years ago, it was you and me in Crawford. We had a blast. You loved my truck! We bonded. I went out on a very big limb and told the whole dadgum world that we were soul mates. "I looked the man in the eye," I said. "I found him to be very straightforward and trustworthy," I said. Oh, yeah, and, "We had a very good dialogue. I was able to get a sense of his soul."

Trustworthy, Vlad. Got soul? Why not just hire the Goodyear Blimp and paint "Mission Accomplished" on the side? Here's the deal, Vlad. I love ya, man. But you gotta stop this. If you don't call a cease-fire and leave those Georgians alone, I'm going to have to whomp you upside the head. Just kiddin.' But you know how this looks. Your invasion of a sovereign neighboring state is unacceptable in the 21st century -- blahblahblah -- and you're hurting Russia's standing in the world, not to mention our relationship.

Oh, and by the way. We're talking 4 million people here. Four million, Vlad. You wanna let the big dog eat? Fine. Pick on somebody your own size. And yes, your pecs are bigger than mine. Whatever. Hey, gotta split. It's Kobe time. Take care and give my love to that cute little gymnast of yours.

P.S. Did you catch the American women's beach volleyball team?

I'm sorry to be writing this e-mail instead of meeting you in person, preferably in the Oval Office, where I belong. Soon, soon.

Nevertheless, and notwithstanding the foregoing, I felt it imperative that I express my deep concern about Russia's invasion of the tiny, democratically elected sovereign nation of Georgia. It would appear that you are not familiar with my platform for change and hope. War does not fit into this template and I am quite frankly at a loss for words to express my deep, deep distress.

As the chosen leader of a new generation of Americans who speak a global language of peace, hope, harmony and change, this is simply unacceptable. Quite frankly, your actions pose potentially severe, long-term consequences. I'm not sure what those might be, but they won't be nice or fun.

Please picture me looking very serious when I say that I respectfully request you to calm down. Life is but a flicker in time and we're but actors strutting and fretting. That is to say, we're all on this planetary journey together and our karma is interrelated and interdependent. Thus, it would seem that our differences are best resolved through words, not bombs.

It is said that war is a failure of diplomacy. I would submit that it is also counterintuitive. If my Kenyan father and my Kansan mother and my multinational upbringing taught me anything, it is that we are all One. That said, I am The One the world has been waiting for -- and you are, quite frankly, blocking my chi.

As soon as possible, I'd like to sit down and begin talking about how we can resolve these and other differences that threaten peace-loving people, which I'm sure includes you. I haven't looked into your eyes and would never presume to know your soul, but I do know that we share a common humanity and that we can all just get along.

Yours in Global Harmony,

Don't make me come over there.