Musings From the Mountaintop 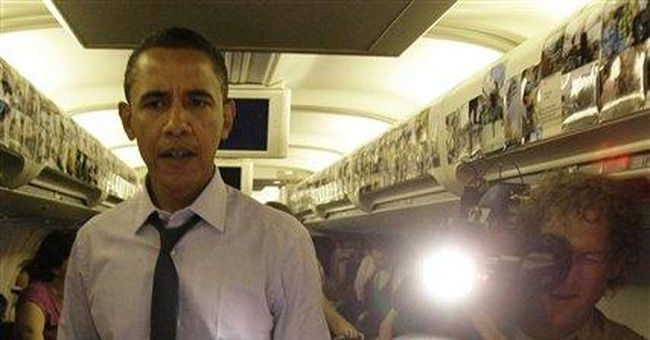 GRANDFATHER MOUNTAIN, N.C. -- It's always good to take a break from the madding crowd, but especially now that American politics has surpassed itself in self-mockery.

After four days avoiding television, blogs, YouTube and cell phones, it is possible to wonder how we get so exercised about the insignificant. Not that politics isn't important. The debate about what role government should play in our lives is no small thing.

And while we can't all kick back at once and hope that our enemies work out their anger issues, a little perspective is salutary and productive in a fallow field kind of way.

Some made fun of Barack Obama recently when he spoke of needing "think time." He was chatting with Britain's Conservative Party leader, David Cameron, who asked Obama whether he ever gets a vacation. Obama replied that he was planning to take a week in August and noted that the most important thing for a leader "is to have big chunks of time during the day when all you're doing is thinking."

Why that was considered risible, I don't know. Surely some extra thinking would have been helpful these past seven years. When I teach writing, I always tell my students to make time for nothingness. To unplug and stare out the window. Great ideas don't materialize on command, but usually come unbidden when we let the mind roam.

That's what Obama surely meant, and he is right. Perhaps Nancy Pelosi was right, too, when, after Democrats voted themselves a five-week recess, she turned off the lights, microphones and cameras. It's great political theater to imagine Republicans standing in the dark, orating into an echo chamber during their guerrilla session.

And one could argue that Democrats are shirking their duty by adjourning without resolving the gas and energy crisis. But isn't it also possible that taking a break from the profiling and pontificating ultimately might prove more productive than the dogfight we call "in session"?

I am sitting on the porch with my friend, Sally Hughes Smith -- wife, mother of four, artist and author. We are talking about family, love, death -- art and the art of living -- the things that really matter to every civilized human on the planet.

Sally's oil paintings are worthy of a coffee-table tome, but I wanted to talk about a slender volume she recently wrote, "The Circle," in which she chronicled her family's journey as they helped Sally's Alzheimer's-stricken mother, now 96, move from the family home to a residential care facility.

The book was Sally's private journal, but friends and family convinced her to publish it. She teamed up with the Medical University of South Carolina's Center on Aging and is donating all book proceeds to the university's research on age-related disease (www.musc.edu/aging/circle.htm). She's also now on the speaking circuit and conducting podcast interviews.

Anyone entering the world of Alzheimer's and dementia would find inspiration in Sally's beautifully written diary, but the book isn't only about living with a relative in mental decline. It's about life's journey, the passage of time and the choices we make -- from how we tackle the daily trials to how we navigate that big lonesome valley.

The message in the bottle is: "We're all on the same journey, you can choose to do it with joy," says Sally. You're going to walk it anyway, so you may as well enjoy it."

It's all the same thing, she says. Life and death, yin and yang, mother to child, child to mother, the circle.

Sally's story is everybody's and the revelations she experienced are both universal and timeless. Revelations, after all, are merely truths waiting to be remembered.

Here's the big one. As she packed up her childhood home and bid a final farewell to all the sights, smells and sounds she treasured, Sally suddenly realized that it wasn't about the house.

"It was about the relationships I was inheriting."

The family, in other words.

The family is what gives our life meaning and makes our nation strong. The family is also what keeps government at a respectful distance -- working for us and not the other way around.

All our political choices should be made in the service of that understanding. That's all. And we've got work to do.