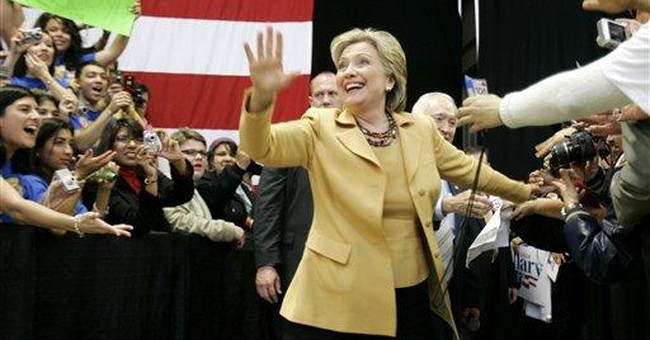 We disagree on almost all the issues—healthcare, Title IX, abortion, women in the military. We argue about the role of women in society. We debate how much nature influences us. But there is one issue that has united conservative and liberal women in the past—pornography. So we know it can be done. This rare and uneasy alliance is slowing forming once again, but this time to take on a much tougher opponent—Hillary Clinton.

The “women’s vote” matters. Women made up a majority of voters in 2004. According to the Census Bureau, women currently comprise 52% of the electorate and women are known to be more likely to show up on Election Day.

Conservative and liberal women should make their voices heard by recognizing the threat Clinton poses to what each group stands for and uniting against her presidential ambitions. And we are starting to do just that. While conservative women have generally been at least weary of Clinton from the beginning, liberal women are starting to recognize Clinton’s shortcomings. Last week, Kate Michelman, the former president of NARAL Pro-Choice America, endorsed Barack Obama. Tuesday, Obama won the support of women by double digits in Maryland and Virginia.

For liberal women, uniting against Clinton at first appears to be a tough decision. On one level, Hillary Clinton is the ultimate feminist —she is, after all, the first woman to have a real shot at winning the presidency.

But on a deeper level, Clinton’s campaign is full of anti-feminist tactics that challenge feminism as a way of life. Women on the left emphasize that they want to be treated as independent individuals, many preferring not to marry or to keep their maiden last name, and be judged solely on their intellect. They claim they can do everything men can do and do it better. They tend to fight to be treated like men, rejecting or belittling sex differences. Yet, Clinton effortlessly has fallen into the role of a damsel in distress, waiting for Bill Clinton to come rescue her campaign throughout the primary season. For example, after a particularly weak presidential debate appearance at Drexel University by Hillary last fall, Bill, not Hillary, led the attack, criticizing the debate moderators and other candidates for picking on poor little Hillary and claiming that “those boys have been getting tough on her lately.”

Clinton is mercilessly employing a new campaign tactic, which exaggerates rather than belittles sex differences—tears. Clinton is making an effort to attract women through an emotional appeal which worked in New Hampshire, instead of through an appeal to women’s intellect. Is this how early feminists thought the first women president would have to act to be elected? Early feminists were burning bras and writing intellectual defenses of female liberation, not crying for sympathy.

The decision to vote against Clinton is much easier for conservative women. She sees bigger, more expensive government, not strong families, as the solution to all of our problems. Think universal healthcare. She rejects traditional values, celebrating the hippie generation by even trying to get a $1 million earmark for a New York Woodstock Museum in an appropriations bill.

Worse, Clinton mocks women who take their responsibilities as a mother and wife seriously, responding to an interview comment about her outspoken role in the campaign by saying, “I suppose I could have stayed home and baked cookies and had teas, but what I decided to do was to fulfill my profession which I entered before my husband was in public life.”

Yes, Clinton has occasionally attempted to soften some of her policies in the past to broader her overall support, as all candidates do in elections. But any observant American knows that the only thing conservative about Clinton is her newfound love for pearls.

In the 1970s and 1980s, conservative and liberal women united to fight pornography, albeit for different reasons. Many religious conservatives argued against pornography because they thought it was sinful and increased sexual immoral behavior, while many noted feminists such as Andrea Dworkin, Catharine MacKinnon and Robin Morgan argued that pornography was degrading to women and facilitated violence against women. Women of all political stripes spoke out, raising much awareness to the issue.

It is time for a new generation of women on the right and the left to speak out on an important issue. Like their alliance to fight pornography, conservative and liberal women should unite, rejecting Clinton’s attempts to woo our votes based on our shared gender, instead voting for the candidate who shares our policies and respects our intellect. Clinton may not be able to unite the country for her, but she has the power to unite women against her.