Socialists Won’t Rest Until We Have Single-Payer Health Care. We Must Stop Them.

Justin Haskins
|
Posted: Nov 12, 2018 12:01 AM
Share   Tweet
The opinions expressed by columnists are their own and do not necessarily represent the views of Townhall.com. 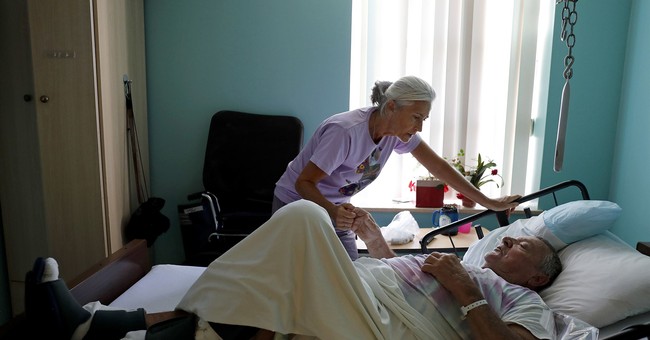 The 2018 midterms could someday be remembered as the beginning of the Democratic Party’s full embrace of creating a single-payer health care system in the United States. For the first time in American history, a large number of Democrats, many of whom identify as socialists, openly campaigned for the creation of a government-run health insurance model.

For instance, Democratic Socialists of America member Alexandria Ocasio-Cortez, who won 78 percent of the vote on Election Day, championed Sen. Bernie Sanders’ (I-VT) “Medicare for All” proposal, calling it the “ethical, logical, and affordable path to ensuring no person goes without dignified healthcare.” According to Ocasio-Cortez, “Medicare for All will reduce the existing costs of healthcare (and make Medicare cheaper, too!) by allowing all people in the US to buy into a universal healthcare system.”

Ocasio-Cortez says she supports a universal system that would include “full vision, dental, and mental healthcare - because we know that true healthcare is about the whole self, not just your yearly physical.”

The cost of enacting such a radical program would be astronomical. Researchers at the Mercatus Center say Sen. Sanders’ plan would cost $32.6 trillion in its first decade, and they note that even if Congress were to double taxes paid by individuals and corporations, it wouldn’t be enough to pay for the program. That should terrify you, especially since the U.S. government’s deficit for the 2018 fiscal year was $782 billion and the national debt now stands at a $21.7 trillion.

But as shocking as the price tag for single-payer health care would be, it pales in comparison to the numerous health care-related problems that would be created by such a model. For starters, the government has an absolutely terrible record of providing health care. One example is the Veterans Health Administration, which is run by the federal government. It routinely suffers from underfunding and long wait times, which has forced the agency to allow veterans to go elsewhere to receive care. As the Military Times notes, “About one-third of all VA medical appointments today are … conducted by physicians outside the department’s system.”

The Washington Examiner reported in 2017, “VA documents also show there are currently 184,520 veterans across the nation waiting longer than 30 days for an appointment and more than 45,000 new veteran patients waiting more than 90 days. Internal VA documents also indicate 479,239 veterans nationwide are waiting for physician requested follow-up appointments over 30 days for the period July to September 2017.”

The Examiner also reported, “Internal Department of Veterans Affairs data provided by whistleblowers reveals the agency is only filling about half of its capacity to make medical appointments,” which means many of the VA’s problems are related to mismanagement and inefficiencies.

The VA also struggles to find health care professionals to fill open positions. Pew notes “40,000 of the 335,000 positions in the Veterans Health Administration are vacant,” and most of these positions are for nurses and doctors.

Medicaid also has a long track record of failing to provide adequate coverage for enrollees. One study published in the Journal of the American Medical Association Oncology found Medicaid patients in California died from cancer at much higher rates than those enrolled in private health insurance plans. According to the study’s researchers, they found “substantial and persistent disparities in survival for patients with either no or other public insurance compared with private insurance for all 5 of the cancer sites examined.”

Many doctors, especially highly skilled specialists, refuse to take on patients with Medicaid coverage because of Medicaid’s low reimbursement rates. An important 2011 study found doctors are 35 percent less likely to accept a new patient enrolled in Medicaid than they are to accept a patient with private health insurance.

If the federal government can’t properly run the VA system or Medicaid—or even the Post Office—why does anyone think it could manage one of the largest industries in the United States today?

Even more troubling is the danger posed to individual liberty by a single-payer health care system. In a world in which the government pays your health care bills, it has an incentive to reward and punish behavior. Why not tax overweight Americans more money under a single-payer scheme? Don’t they cost the system more? Why not force Americans to quit smoking tobacco or drinking alcohol? Aren’t those activities associated with numerous health dangers?

Single-payer systems are also notorious for rationing care. In October, the Telegraph (U.K.) noted, “A report by Fertility Fairness reveals that local commissioners are imposing ‘arbitrary’ criteria such as male body mass index (BMI), as well as age, as a means of restricting access to IVF,” which is used to help couples struggling to have children.

In other words, the masterminds in England have determined some men are just too fat to have children.

This story comes on the heels of reports indicating the English National Health Service’s forthcoming 10-year plan will make group appointments with primary care doctors—which could include as many as 15 patients—the “default” option for patients with long-term health problems.

For these and countless other reasons, conservatives and other supporters of individual liberty need to begin mobilizing against some left-wing Democrats’ plan to introduce a single-payer system in the United States. If Democrats manage to gain even more power in 2020, they will almost certainly attempt to enact a single-payer plan similar to Sen. Sanders’ Medicare for All proposal. To save our republic (and lives), we must stop them.

Justin Haskins (@JustinTHaskins) is the executive editor of The Heartland Institute and the co-founder of StoppingSocialism.com.