Dems Wrong Again: Republican Tax Cuts Are Paying for Themselves

Justin Haskins
|
Posted: Oct 04, 2018 12:01 AM
Share   Tweet
The opinions expressed by columnists are their own and do not necessarily represent the views of Townhall.com. 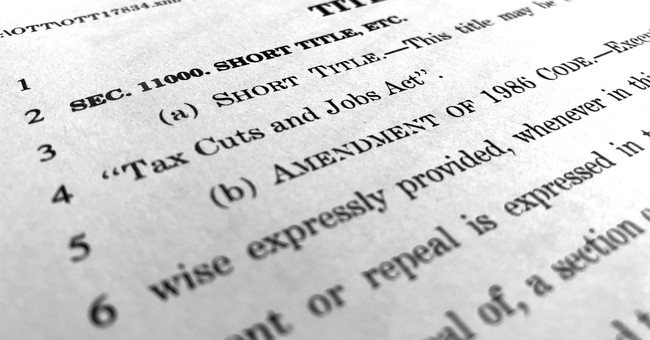 One of the claims most often repeated by Democrats in the weeks and months leading up to the passage of the Tax Cuts and Jobs Act was that the Republican-backed tax reform legislation would cause federal budget deficits to skyrocket. However, nearly nine full months after the legislation took effect, the Trump-Republican tax cuts aren’t only helping to usher in unprecedented prosperity for families across the country, including for women and minorities, they are also largely paying for themselves.

TCJA dramatically cut the corporate income tax rate, from 35 percent to 21 percent, lowered most personal income tax rates, doubled standard deductions, and increased the child tax credit from $1,000 per child to $2,000, among many other provisions meant to improve economic growth.

According to data provided by the Treasury Department, in August 2018, tax receipts—the amount of money collected by the federal government by individuals and businesses paying their taxes—totaled $219 billion, only about $7 billion less than the receipts recorded in August 2017, when tax rates were much higher. Thus far in fiscal year 2018, the federal government has brought in $2.98 trillion, $19 billion more than what had been collected during the same period in fiscal year 2017.

These figures are in line with the projections made by the nonpartisan Congressional Budget Office (CBO) earlier in the year. CBO estimated fiscal year 2018 revenues would total about $3.34 trillion, $73 billion more than what the Obama administration collected in its final full fiscal year.

How can tax revenues remain at historic highs despite the massive tax cuts passed by Trump and congressional Republicans? When less money goes to the government, more cash is available to businesses to hire employees, expand product lines, and invest in the future, and families have more money in their budgets to spend on goods and services, also helping businesses. Economies grow rapidly when people get to keep their own money, because individuals, families, and businesses are much better than governments at managing their own finances and spending money wisely.

The positive impacts of the tax cuts passed by Trump and Congress are crystal clear. The Bureau of Labor Statistics reports unemployment in August was 3.9 percent, a full percentage point lower than August 2016, when Barack Obama was still in office. The number of full-time employees has increased by four million since August 2016. Black unemployment has dropped by 1.7 percentage points during the same period. Hispanic unemployment has decreased by nearly a full point. Unemployment for women has fallen by eight-tenths of a percentage point. And food stamp enrollment was 4.1 million less in June 2018, the most recent month for which data are available, than it was just two years earlier.

Although these gains are tremendous, it’s also important to note government spending has continued to increase substantially in recent years, running up the deficit. Total spending through the end of August for fiscal year 2018 was $3.88 trillion, and the deficit was a whopping $898 billion, according to the Treasury Department. Spending is up in most major categories, including defense, Social Security, Medicare, and interest payments owed on the nation’s debt, which has thus far totaled $332 billion for fiscal year 2018.

America’s booming economy, which is almost entirely the result of Republicans’ efforts to reduce burdensome regulations and cut taxes, presents an important opportunity for President Trump and Congress to balance the budget. But that can only occur if Republicans get serious about reforming expensive entitlement programs and reducing spending across the board. They must not let this important opportunity to get America’s fiscal house in order go to waste!

Justin Haskins (Jhaskins@heartland.org) is executive editor of The Heartland Institute and the co-founder of StoppingSocialism.com